With the recent U.S. decision to pull out of Syria and stop supporting the PKK’s Syrian offshoot PYD, it seems like 2019 will have better news for Turkey with a prospective of wiping the PKK off its boundaries altogether. 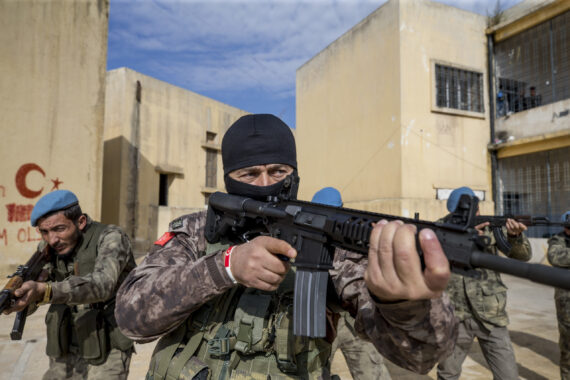 Turkey’s counterterrorism in 2018 has been quite impressive on two grounds. On the one hand, the country did not suffer from heavy blows due to terror attacks. On the other hand, Turkey has conducted very impressive counterterrorism operations. As for the first factor, the contrast is quite clear. Turkey was a country which suffered heavy casualties in the past years. The PKK and Deash both caused severe damages in those years with suicide bombs killing tens of victims in a single attack. For instance, Deash attacked a nightclub in Istanbul on the very first hours of 2017 causing 37 deaths and 70 injured. Three weeks before this attack, the PKK attacked a crowd outside the stadium in Istanbul after a significant sports game. 44 people lost their lives and 166 were injured in this attack. Unfortunately, there are many other examples of both Deash and PKK terror attacks from earlier years.

Despite these sour memories, 2018 did not have such shocking attacks carried out by terror organizations. Further, the military targets also did not suffer severe damages throughout 2018. And this relative safety was not due to a lessening activity of terror organizations and counterterrorism operations. Quite the opposite, Turkey was still a target preference for these organizations but both Deash and the PKK could not have the necessary opportunities to finalize their attacks. This shows us the greater effectiveness of Turkish counterterrorism measures in 2018.

According to official statements, Turkey carried out over thousands of counterterrorism operations in 2018 and, as a result, 1746 terrorists were neutralized.

According to Suleyman Soylu, the Minister of Interior, Turkey carried out over thousands of counterterrorism operations in 2018. As a result of these operations, 1746 terrorists were neutralized. Out of these terrorists, 693 were killed, 534 were captured alive, and 519 surrendered to Turkish security forces. 107 of those neutralized terrorists were high profile names in the wanted list. The operations also captured quite a sum of explosives (1647 hand grenades, 23 tons of other explosive material) according to a statement by the Ministry of Interior.

All these efforts were carried out with a much aggressive and decisive counterterrorism strategy. Turkey in this new era prioritized countering terrorism over every other goal. While Deash was cleaned off from Turkey’s border with the Euphrates Shield operation in 2016, the PYD pocket in Afrin was also cleaned this past year (a deeper evaluation of the Afrin operation and its aftermath can be found here and here). This way Turkey prevented further infiltrations from Afrin to Turkey’s Hatay and surrounding areas where the PKK’s Amanos group is trying to settle. Turkey has also carried out operations inside Iraq both with air bombardments of strategic PKK targets and land forces to clean the ground. The details of this fight has been written in this column throughout the year (particularly here, here, here and here).

Turkey is no longer reactionary in its fight against terrorism but takes initiative within and beyond its borders. This is the strategy of countering terrorism in its source locations as Turkey is already free from any terror-controlled pockets within its boundaries

One last terror organization that Turkey has dealt with (and is currently dealing with) is the Gulenists (FETO). The organization’s national network has already been crushed, its international network is being weakened day by day with Turkey’s international cooperation. As Mevlut Cavusoglu, Minister of Foreign Affairs, announced that a total of 104 FETO members have been extradited to Turkey up to now with the cooperation of 21 countries. FETO’s center and leader is still located in the U.S. but nowadays the diplomatic and intelligence staff exchanges have become more visible over this issue between the two governments, which can be read as a sign for some concrete steps in the future. However, the U.S. does seem reluctant to extradite the organization’s leader who is currently living in Pennsylvania.

Overall, Turkey is no longer reactionary in its fight against terrorism but takes initiative within and beyond its borders. This is the strategy of countering terrorism in its source locations as Turkey is already free from any terror-controlled pockets within its boundaries. With the recent U.S. decision to pull out of Syria and stop supporting the PKK’s Syrian offshoot PYD, it seems like 2019 will have better news for Turkey with a prospective of wiping the PKK off its boundaries altogether.