Turkey's recent military operation, Operation Claw, is a continuation of Turkey's counter-terrorism strategy of maintaining active military presence and fight on the field. The operation has three objectives. 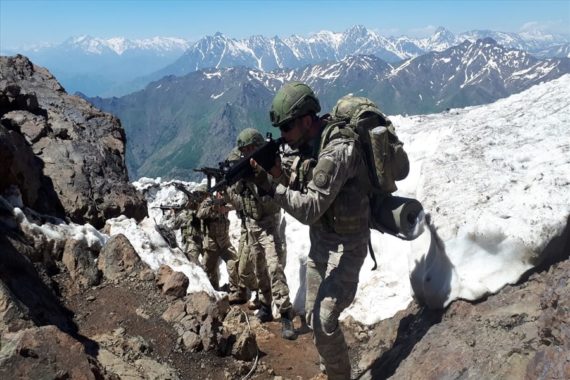 Turkey has been actively fighting PKK terrorism since 1984. As compared to the last 40 years of struggle, Turkey’s counter-terrorism strategy, which was put in practice in 2015, has fundamentally changed the facts on the ground.

To begin with, it is important to note that the PKK’s number of losses has considerably increased recently. Since 2015, taking Operation Olive Branch in Afrin for example, domestic operations to contain the PKK’s urban and rural mobilization in Turkey, as well as Operation Decisiveness and Operation Claw in Iraq, Turkish security forces neutralized more than 15 thousand PKK terrorists in Turkey, Northern Iraq and Syria in total. More importantly, the number of high-ranking terrorist figures neutralized through drone strikes and special intelligence operations conducted by Turkey reaches up to 100, which marks the highest number in Turkey’s counter-terrorism operations history in a very short time period.

From a strategic counter-terrorism perspective, it is possible to argue that these numbers are relatively high to contain the entire mobilization of the PKK. However, from a realistic perspective, the PKK is still alive and has the capacity to sustain its rural insurgency in Iraq and particularly in Afrin, Syria. According to official intelligence estimations, the PKK has about 8 thousand militants in Iraq and Iran. The main driving factor behind the mobilization capacity of the PKK is the ongoing fight against DAESH in Syria and Iraq. More importantly, the PKK’s freedom of maneuver in the YPG-controlled areas in northeastern Syria, which is sustained by the political and military support of the U.S., strengthens this mobilization capacity.

The PKK is still alive and has the capacity to sustain its rural insurgency in Iraq and particularly in Afrin, Syria.

The second critical point is about the PKK’s demobilization and limited presence in Northern Iraq: Turkey has been actively operating in the region since Operation Decisiveness was carried out by the Turkish Armed Forces. The Turkish Armed Forces are actively monitoring the region that the PKK has used as a military camp. The military presence of Turkish security forces in Barmiza, Dilan, Kawet, Sidakan, Manava in the northeastern part of Iraqi Kurdistan as well as the Turkish military bases around Kani, Mase, and Banfi along the Turkish-Iraqi border are preventing the PKK to mobilize its human resources and logistics. Furthermore, Turkey’s active intelligence surveillance operations in Northern Iraq are effectively containing the PKK’s active mobilization. In this regard, Turkey’s counter-terrorism technology grants a significant advantage to the Turkish Armed Forces.

The recent military operation, Operation Claw, is a continuation of Turkey’s counter-terrorism strategy of maintaining active military presence and fight on the field. Turkey has three operational objectives when it comes to Operation Claw:

First, Turkey aims to contain PKK mobilization in the Hakurk region, which is used by the PKK as the second largest military camp after the Qandil Mountain. Hakurk has also  been used as a safe corridor by the PKK for many years to secure its presence and to infiltrate terrorists directly into Turkey. Although the Hakurk region has been targeted many times in previous years, the PKK has never given up on this region for its safety. With Operation Claw, however positions have changed and now Hakurk is no longer considered a safe haven by the PKK. In fact, Turkish military forces now control the region to directly contain the PKK’s mobilization between the Qandil Mountain and other regions. Thus the operation will be improved by increasing the base areas and consolidate the mobilization of Turkish Armed Forces.

Thirdly, Turkey will eventually want to contain the PKK’s political mobilization across the region. In this regard, Ankara will recalibrate the Iraqi Peshmerga’s power against the PKK and eliminate the PKK’s influence over the Sinjar region, where the terrorist group has active control over the Yezidi forces. Following the power vacuum, which emerged since DAESH lost control, the PKK has been actively using Sinjar to freely move between Iraq and Syria and for recruitment purposes. According to intelligence estimations, the PKK has five camps in Sinjar. Maintaining control over the PKK camps before the Qandil Mountain is a strategically important objective for Ankara.

To conclude, it can be argued that Turkey’s ultimate strategic objective is to strategically and operationally hold important points in Northern Iraq to reduce terrorist infiltration into Turkish territory, minimize PKK mobility, and to catch the terrorists before they conduct terrorist attacks. Therefore, Operation Claw can be inferred as another move of Turkey’s counter-terrorism strategy, and new cross-border operations may be pursued in the future.