Turkey will have its own domestic car in 2021. With low labor costs, skilled labor force, and more than a million domestic sales, the Turkish automotive industry will have an advantage in the production of a domestic brand. 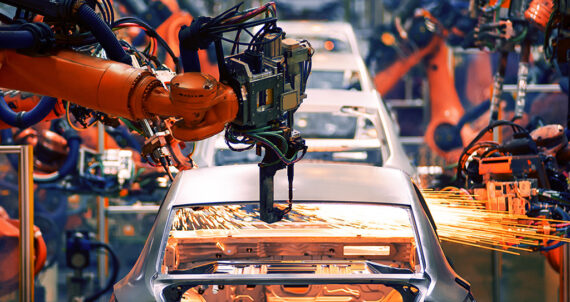 The production of automobiles led by developed countries has a great influence on the progress of many sectors. The automotive industry, which has a direct impact on production, employment, and technological development, has strategic importance for the economy. The added value it produces has positive effects on many sectors with forward and backward links. The production of automobiles, which are fed by sectors such as iron-steel, gas, electricity, and software, contributes to the development of areas such as defense, agriculture, and transportation. Therefore, automobile production has an important place in terms of the added value that it provides to the economy of a country.

The global automotive industry, which accounts for about 5 percent of the world economy, corresponds to the world’s fourth largest economy. Among the sectors with the largest share of global trade, the automotive industry generated 1.3 trillion dollars of global trade in 2015. It has been estimated that the worldwide production of cars reached 95 million in 2017 and will approach the 100 million limit in 2020. According to the statistics, Turkey produces nearly 1.5 million cars and exports around 32 billion dollars annually in the automobile sector. This number can drastically increase if Turkey owns a domestic brand.

Turkey produces nearly 1.5 million cars and exports around 32 billion dollars annually in the automobile sector. This number can drastically increase if Turkey owns a domestic brand.

The automotive industry has its share in the wind of change on a global scale, which is driven by advanced technologies, sustainable policies, and modified consumer behavior. It is foreseen that innovations such as autonomous driving, electrical motors and smart cars will structurally change the automotive industry. With the emergence of these innovations, it is understood that there will be many changes in terms of both producers and drivers. With the introduction of new models that provide more energy efficiency and advanced technologies instead of existing models, it is estimated that the share of these models will increase especially in developed countries. In this period of change, new car brands will enter the market with less difficulty. In this case, a window of opportunity will be opened for new players such as Turkey.

A study conducted by the International Energy Agency (IEA) demonstrates that the number of electric cars is estimated to be 9-20 million in 2020 and 40-70 million in 2025. Besides, the study also expects that the electrical car fleet in the world will be 8 percent in the lowest scenario in 2040 and 26 percent in the highest scenario. One of the most important factors affecting the high levels of these estimations is the incentives and tax cuts of local governments and nation states. In addition, it is seen that electric cars will have more competition and tax exemption than fossil-fueled cars. Tax deductions and the spread of incentives will have a significant impact on the proliferation of electric cars. The number of electric cars in Turkey is not at the deserved level at the present time. However, it is estimated that the number of electric cars will increase rapidly with a domestic brand.

In the United States, the total amount of local and federal incentives for electric cars has reached $10,000 in some cases. In addition, the charge of service in public space and parking are also free for those cars. It is understood that the expansion of electric cars will increase dramatically in the following countries such as Britain, Germany, Norway and France, which have the world’s largest automobile markets. At the same time, if governments allocate tax cuts and incentives for production and purchase, eventually the number of electric cars will increase. Likewise, Turkey can also increase the number of electric cars with use of such incentive mechanisms.

Moreover, although electric cars stand out in terms of the environment, it is difficult to drive them in long distances with a single charge and the battery expenses are a huge problem for consumers. However, due to the recent developments in battery technology, it is predicted that the costs of electric cars will decrease in the near future. For instance, the cost of $900 per kWh will diminish over time to a range of $200-300 per kWh. If the number of production is more than 500 thousand, it is stated that the cost per kWh is as low as $145. Thus, it is estimated that the battery price of 50 kWh is estimated to decrease to approximately 7 thousand dollars. As a result, with R&D studies in battery technology, it is considered that both the single-charge travel and the price of electric cars will be positively affected.

Turkey will have its own domestic car in 2021. With low labor costs, skilled labor force, and more than a million domestic sales, the Turkish automotive industry will have an advantage in the production of a domestic brand.

Charging stations are one of the forefront infrastructures that have a huge impact on electric cars, but it will take time for some major cities in the world to increase the number of these stations. Electric cars will become more common in crowded and polluted cities if local and national governments allocate extra benefits for consumers. Turkey has been observed to increase the number of charging stations. In particular, it is expected that the increase of stations in cities such as Istanbul and Ankara will positively impact the number of electric cars.

The automotive production in Turkey is manufactured by assembly process and the majority of high-end input, including engine and transmission components, are imported from other countries. The production of the domestic car will play an important role in changing this situation. Although the current level of domestic technology is at the required level, the investment for the domestic car has not yet been completed due to the high initial investment costs. Furthermore, with the development in recent years, the first mass production of domestic cars is predicted to take place in Turkey in 2021. With low labor costs, skilled labor force, and more than a million domestic sales, it is estimated that the Turkish automotive industry will have an advantage in the production of a domestic brand.

As a result of consumer demand and environmental concerns, the global automotive industry is at the beginning of a transformation in the forthcoming twenty years. There will be exceptional opportunities for new participants that enter the market. In this period, major brands that enter the market will re-decorate the industry on a global scale. This state of consciousness in Turkey, which has risen the motivation to implement domestic automobile brands, has been dreamed about for years.