New determinants in Turkish politics reflect one point: It is possible to see a new balance of power among political parties after the elections, which will also shape the political order in the long term. 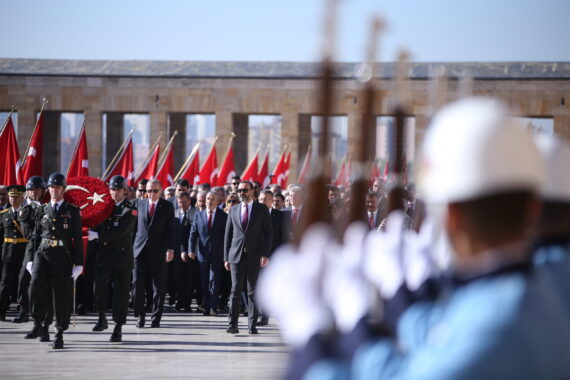 urkish President Recep Tayyip Erdogan visits the Anitkabir, the mausoleum of the founder of Turkish Republic Mustafa Kemal Ataturk, during a ceremony marking the 95th anniversary of Republic Day in Ankara, Turkey on October 29, 2018. Anadolu Agency

2018 has been a milestone for Turkish politics. The country faced serious challenges both in domestic and foreign policy areas. However, Turkey’s transition to a presidential system and the establishment of the new state structure also brought new opportunities to provide political stability. The transformation of the political system and the emergence of two different blocs, the People’s Alliance and the Nation’s Alliance, also gives us a clue about Turkey’s political outlook in the long term. Thus, the domestic policy agenda of 2018 is highly crucial in order to analyze primary issues that will appear on the table in 2019.

It is obvious that the most surprising incident of 2018 was the snap elections held on June 24. After long discussions, the AK Party and MHP agreed on the necessity of snap elections in order to overcome economic and security-based crises. Following the success of the People’s Alliance, which consists of the AK Party and MHP, against the Nation Alliance, which consists of the CHP, Iyi Party and Felicity Party, the transition to a presidential system was guaranteed. President Erdogan became the first president of Turkey under the presidential system and set a comprehensive agenda for the transformation of bureaucratic rule in accordance with the new system. At this stage, it should be reminded that the consolidation of the new system requires more dedication and effort.

New determinants in Turkish politics reflect one point: It is possible to see a new balance of power among political parties after the elections, which will also shape the political order in the long term.

Due to this reason, the most crucial domestic policy agenda for 2019 will be drawing a road map for the consolidation of the presidential system. While all regulations up until now carry the essential characteristics of the new system, there is still need for providing and internalizing new rules and regulations in order to provide transparency, efficiency, bureaucratic rationality, and accelerated decision-making under this system. The new governance system will be strengthened through comprehensive regulations covering possible deficiencies that may emerge over time.

Without a doubt, the second primary agenda of Turkey’s domestic policy in 2019 will be the local elections to be held on March 31. All parties are about to finalize their candidate selection process and are preparing their election manifestos. Turkey will experience alliances on a local level during this election, which will be a new determinant of the election results. Such alliances on a local level was a rare phenomenon in Turkish politics, and nobody is sure about the possible outcomes of the alliances on a local level. Therefore, predicting the outcome of the local elections is not easy for politicians and analysts. All of these new determinants indicate a certain point: It is possible to see a new balance of power among political parties after the elections, which will also shape the political order in the long term.

The consolidation of Turkey’s presidential system and the local elections will be the top priorities of all political parties in 2019.

For all these reasons, the consolidation of Turkey’s presidential system and the local elections will be the top priorities of all political parties in 2019. Since the opposition parties are aware of how important the local elections are, they will try to prevent strengthening the People’s Alliance. On the other hand, the People’s Alliance will continue to underline the significance of the local elections in order for the system to further entrench. In other words, both issues are interconnected to each other and the failure in one of them might cause the failure in the other. Thus, political parties will set their agendas based on these issues to be game changers in the new term.