Egypt, Israel and Greece are meeting frequently to focus on partitioning the Eastern Mediterranean without Turkey. But Turkey is increasing its active position in the region day-by-day. 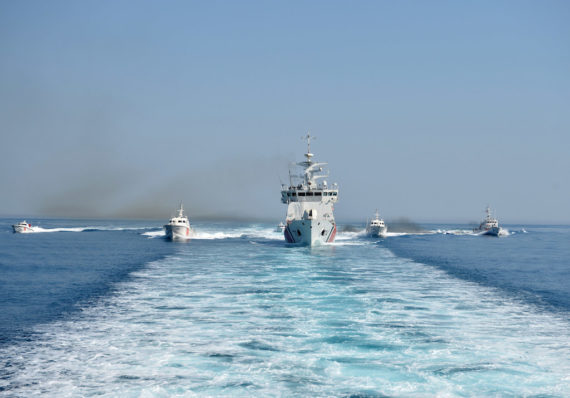 Turkish Coast Guard's migration drill in the Mediterranean Sea to rescue migrants stuck at sea, in Mersin, Turkey on May 16, 2019. Anadolu Agency

Countries that share maritime borders have to make agreements on the limits of their authorities to ensure that they can operate independently in naval spaces such as Exclusive Economic Zones (EEZ) and continental shelves. Turkey is currently not a part of any delimitation agreements in the Eastern Mediterranean except one signed between Turkey and the Turkish Republic of Northern Cyprus (TRNC). Due to this reason, in order to examine the legal position of Turkey in the Eastern Mediterranean, the official opinion regarding the subject must be analyzed first.

Turkey is not a part of the United Nations Convention on the Law of the Sea of 1982 (UNCLOS). The country also does not have any national legislation regarding the determination of exclusive economic zones and continental shelves. The existing legislation regarding the subject of territorial waters is Act No. 2674 on Territorial Sea of the Republic of Turkey dated 1978. With the authority given by this law, the Council of Ministers has determined the extent of Turkey’s territorial waters in the Mediterranean as twelve nautical miles.

Turkey first expressed its concrete opinion on the subject with the diplomatic note published on March 2, 2004, following the delimitation agreement signed between the Greek Cypriot Administration of Southern Cyprus (GCASC) and Egypt in 2003. In this note, Turkey expresses that it has ab initio and ipso facto (existing from the beginning and do not need to be declared) rights in the Eastern Mediterranean, especially in the region west of the coordinates 32 degrees, 16 minutes and 18 seconds, and any delimitation agreements concerning this region cannot be made without the participation of all countries related to the region, and due to this it does not recognize the agreement signed between Egypt and the GCASC.

In addition, Turkey also expressed that the GCASC does not have the authority to represent Cyprus alone, and the TRNC must also be a part of all actions and processes regarding the island. Repeating similar opinions on January 30, 2007, following the delimitation agreement signed in 2007 between Lebanon and the GCASC, the Ministry of Foreign Affairs stated concerns regarding the oil and natural gas exploration activities of GCASC in the Eastern Mediterranean with its statement published on August 5, 2011 and expressed that efforts of this kind were impediments to the progress of the peace talks in the Island.

Graph 1: The Area Declared as Continental Shelf by the Ministry of Foreign Affairs. According to the Ministry, the area extends to the point where the Turkish-Greek continental shelf west of 28th meridian east reaches the Mediterranean.

The reason that the discussions regarding the maritime limits in the Eastern Mediterranean have heated up is that the GCASC has signed aggressive agreements with various countries starting from 2003. The important issue that directly effects the situation is that the GCASC is being treated as the sole representative of the Island of Cyprus with regards to international law. And due to this reason countries of the region only view the GCASC as their counterpart in these agreements. Turkey’s responses which have been limited to diplomatic notes and similar reactions over this process have not been sufficient. Because some countries in the region could also sign delimitation agreements with Turkey instead of GCASC, and even in this subject Turkey has remained somewhat passive.

Turkey has not published any official maps regarding its maritime area of jurisdiction in the Eastern Mediterranean to date. There exists a map in the literature which shows the maritime areas of jurisdiction each country in the region has claim to with respect to the international law.

Graph 2: Maritime Areas of Jurisdiction In Eastern Mediterranean According to International Law

As stated before, the main determinant of Turkey’s policies in Eastern Mediterranean is the idea that “maritime limits should be determined via international agreements.”

The reason why the Eastern Mediterranean has become a heated topic for both Turkey and the Turkish Republic of N. Cyprus is that the administration of Southern Cyprus is taken as the only legitimate actor under international law.

The delimitation agreements GCASC has signed with the countries of the region are far from being fair and are against the principle of delimitation proportional to coastal length. Upon examination of the agreements the GCASC has signed with Syria, Israel and Lebanon, it can be seen that the capes of Zafer and Baf are recognized as coastal lines and despite these three countries having 1.8 times more coastal length than GCASC the extents of their areas of maritime jurisdiction are more or less equal. GCASC has illegally acquired 3957 square kilometers of area that should be under Lebanon’s jurisdiction and 4600 square kilometers of area that should be under Israel’s jurisdiction.

There exists a similar situation in the delimitation agreements signed between Egypt and GCASC, which were later annulled by the Egyptian parliament. If the coastal length of GCASC is determined based on the capes of Zafer and Arnauti the size of the area under the GCASC’s jurisdiction should roughly be half of Egypt’s, but instead the area given by the agreement to GCASC is 21 thousand 500 square kilometers larger.

It cannot be said that nothing can be done against these unjust acquisitions of the GCASC. The countries that have signed these agreements can annul them through their legislative organs due to this situation against their interests. The annulment of the agreement between Egypt and GCASC during the presidency of Mohamed Morsi by the legislative organ is such an example. The nullification of the agreement on the delimitation of continental shelf and other maritime areas signed between Albania and Greece by the Albanian Constitutional Court is another event that provides an example.

The rights of Turkey and Turkish Republic of N. Cyprus in the Eastern Mediterranean are unalienable rights.

The rights of Turkey and TRNC, which is an integral element in the representation of the Island of Cyprus, in the Eastern Mediterranean are unalienable rights. Along with the fact that the TRNC undoubtedly has claim to the EEZ rights claimed by the GCASC, Turkey also has rights regarding the south of the Island stemming from international law. While TRNC is only officially recognized by Turkey, it is a party in the Cyprus talks and is with its own independent territory and government, a country that has declared independence. Even though the GCASC, by ignoring this status of the TRNC, has conducted the measurements determining the extent of its EEZ by basing them on the Cape of Karpaz, which is part of the TRNC’s territory, as an independent state the TRNC must make its own delimitation agreements with Egypt, Syria, Lebanon and Israel. While the existing regional political conjuncture does not make this possible, TRNC must shape its future policy via this perspective.

Considering the situation that exists today, it can be seen that many of the countries in the Eastern Mediterranean are signatories of the 1982 UNCLOS agreement but Turkey is not a part of this agreement. Due to this, in the solution of the problem of the delimitation of continental shelves and exclusive economic zones in the Eastern Mediterranean, international customary laws rather than the written rules of international law must be employed.

As it is expressed in the aforementioned agreements, when the relevant rules of the customary laws are examined it is understood that a solution must be created within the framework of the principles of fairness through taking all dynamics in the region into consideration. Looking at the geography of the region, it is understood that a solution can only be created and the issues of exclusive economic zones, territorial waters and continental shelves can only be resolved through the establishment of delimitation agreements between countries sharing maritime borders.

The legal arguments Turkey can bring forward on the subject of continental shelves and exclusive economic zones in Eastern Mediterranean can be listed as follows:

The primary argument of Turkey should be that no unilateral actions can be taken regarding the delimitation of maritime boundaries, and that the problem must be resolved through bilateral or multilateral agreements which take customary international law into account.

The continental shelf of each country must be a natural extension of that country’s territory and should not be a part of any other country’s natural extensions. Turkey must also take this argument that has been adopted by international law into account.

Another argument Turkey must bring forward in the delimitation processes is that solutions must be based on the principles of fairness. Meaning that the solutions regarding these subjects must be fair and must protect the rights of all parties. Because in the event that islands such as Kastellorizo and Rhodes in the region are recognized as continental shelves by themselves, the rights of Turkey in the region will be limited in a way that is against the principles of fairness.

Turkey must prevent unlawful activities from being conducted in the region by voicing its rights before international authorities more often.

The Eastern Mediterranean being a semi-enclosed sea gives Turkey the right to claim that the delimitation of boundaries in this sea must be done according to special principles, meaning within the characteristics of concrete delimitation.

Ultimately when the latest events in the Eastern Mediterranean are examined, it can be seen that certain steps are being attempted to be taken via bypassing Turkey and the TRNC. GCASC claiming territory in TRNC’s regions of Maraş and Güzelyurt to use the energy reserves in the region drives the problem away from a solution. It is not difficult to guess, especially in light of the recent events, that Egypt, Israel and Greece are meeting frequently to focus on partitioning the Eastern Mediterranean without Turkey.

On the other hand, Turkey is increasing its active position in the region day-by-day. The Turkish drilling ship Fatih began seismic exploration and drilling activities in the Eastern Mediterranean on October 29, 2018, and the “Mavi Vatan” drill conducted last month undoubtedly has the purpose of signaling to other countries in the region that no plans ignoring Turkey and the TRNC will be allowed. In this way Turkey, an important actor with rightful claims in the region according to international law, must prevent unlawful activities from being conducted in the region by voicing its rights before international authorities more often.