Turkey's ministries to provide education to the unfortunate in prison

A protocol has been signed between the Ministry of Education and Ministry of Justice for the education of convicts, detainees, and those on probation. 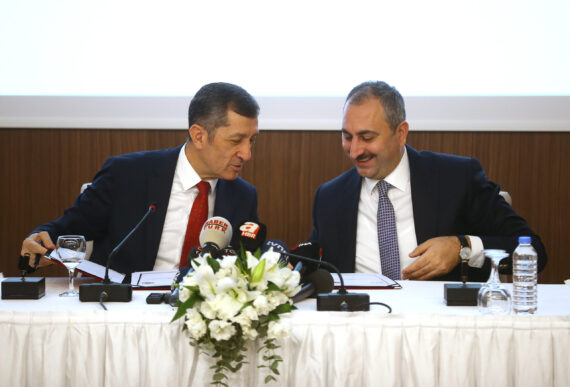 A protocol called ‘Cooperation on Occupational Education’ has been signed by the Minister of Education, Ziya Selcuk, and Minister of Justice, Abdulhamit Gul, which intends to re-integrate those who have been convicted and those on probation into society.

During the signing ceremony, Abdulhamit Gul highlighted the importance of education by stating that education will shape the future of societies. He added, “An effective education requires continuity nd the Justice Ministry has continued the education of convicts, those arrested and those on probation, in order to re-integrate these people into society with a profession.”

In his statement during the ceremony he further added: “As the result of our government’s approach, the right of education will not be prevented in any situation.”

35 thousand convicts have been given the right to education in prisons up to now. “Not only distant education in high school and university level, but there are also convicts who are continuing with their masters and PhD education,” Gul added.

The Justice Minister also added that there are 50,000 convicts and detainees who are currently working with insurance rights under the structure of the Job Offices Administration.

Ziya Selcuk also expressed that the protection of the right of education is a basic human right that needs to be ensured without any type of discrimination.

Selcuk further stressed that being a prisoner does not mean that these individuals can be stripped from the right to education. “In this regard, to provide all kinds of education to the convicts and detainees in penal institutions and those on probation and old convicts who are redirected by ‘Protection Councils,’ that allow them to attend both formal and informal education activities is very important.”