Turkey's Minister of Commerce, Ruhsar Pekcan, stated that the ministry is working on a new system that will expedite both export and import transactions via blockchain technology. 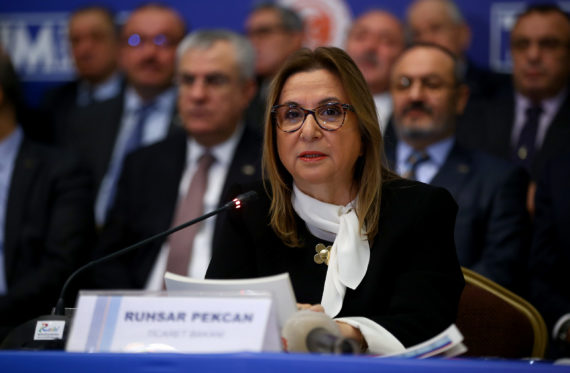 Turkish Trade Minister Ruhsar Pekcan makes a speech as she attends the Evaluation Meeting of Export Statistics for 2018 at the JW Marriot Hotel in Ankara, Turkey on January 04, 2019.

Speaking to Merve Ozlem Cakir from Anadolu Agency, Turkey’s Minister of Commerce, Ruhsar Pekcan, stated that in the development of this new system, the Ministry of Commerce will be the first public member of the new ‘Turkish Blockchain Platform’ – an initiative of Turkish Informatics Foundation (TBV).

Pekcan remarked that the Ministry of Commerce, which has embodied the first internationally accredited ‘Behavioral Public Policies’ unit, continues to bring new concepts to public policies.

Turkey’s Ministry of Commerce is working on the digital transformation of the export transactions, and that with the new technology, coordination between institutions and companies will ascent to a new level.

Highlighting the importance of blockchain technology for the future, Pekcan said that as the Ministry of Commerce they are working on the digital transformation of the export transactions, and that with the new technology, coordination between institutions and companies will ascent to a new level.

Pekcan also highlighted that the ministry is conducting talks with international software giants and countries such as Singapore, which is one of the leading countries in digital transformation, with regard to blockchain technology. She specified that the ‘new era’ has the potential to eliminate various bureaucratic obstacles, like regulation differences, non-standard certificates and fraud issues, decelerating international commerce, via blockchain technology.

Emphasizing the significant role of the ‘Turkish Blockchain Platform’ – which embodies all important actors in the sector – as an ‘interface’ in digital transformation, Pekcan also stated that the ministry will be the first public member of the platform and will bring the lacking public perspective within it. She also added that if the blockchain technology provides solutions to the regulations and international laws that determine elements of international commerce, then the ‘public’ needs to execute detailed studies and analysis in this technology.

Pekcan stressed that the value added to the public with the use of blockchain technology is exposed with many ‘fact studies’ and the positions taken by countries, which abrogated industrial and internet revolutions, in the ongoing ‘blockchain revolution’ that will determine their ‘development level’ in the new era.

The minister stated that they are shaping the policies of the ministry with the participation of the actors ‘on the ground’ and a cooperation protocol will be signed between the ministry and the ‘Turkish Blockchain Platform’ on January 9, with the involvement of over 30 public companies and institutions.

Meanwhile, according to the numbers provided by the Uludag Automotive Industry Exporters’ Association (OIB), in 2018 automotive exports increased by 11% compared to the previous year, which is calculated at 31.6 billion dollars. This is the highest in Turkish history. The Turkish e-commerce sector reached 50 billion Turkish Liras (9 billion dollars) in 2018. Emre Ekmeci, Chairman of the Association of E-commerce Operations (ETID) also stated that the e-commerce industry is expected to grow around 30-35 percent in 2019.

According to the 2018 ‘Trend report’ of Hepsiburada – Turkey’s leading e-commerce brand – the online sales from Hepsiburada in 2018 increased 60 percent compared to 2017.

Also, according to a statement by Sahibinden – another leading company in e-commerce and e-classified – the company gave services to more than 44.3 million people in 2018, and the number of total posts seen in 2018 reached 25 billion.

Also Read
Global Food Crisis: Russia and the West Play the Blame Game
We use cookies to optimize your online user experience. To learn about our use of cookies and how you can manage your cookie settings, please see our Privacy Policy. By continuing to use our site you are excepting our use of cookies.Accept Cookies & CloseMore Info