The success of projects such as TANAP and TurkAkım may be accepted as a reference point regarding Turkey's potential as a center of energy trade. These will help Turkey's progress towards the goals it intends to achieve. 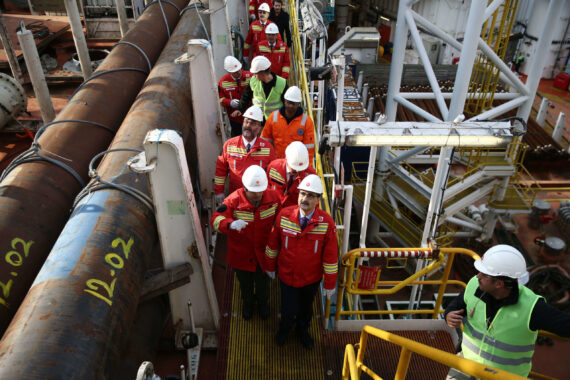 1. What is the scope of Turkey’s National Energy and Mining Policy?

Turkey has experienced and continues to experience rapid changes in many fields since 2002. The goals set, large projects implemented and policies put into effect in the field of energy, as well as investments made in the areas of transportation, healthcare and infrastructure, have brought Turkey to an important point. Accordingly, the National Energy and Mining Policy introduced to the public in 2017 by former Minister of Energy and Natural Resources, Berat Albayrak, has started to yield results.

The National Energy and Mining Policy is built around three foundational strategies. The first of these is indigenization, the second is ensuring the security of energy supply and the third is the formation of a foreseeable energy market. As part of the indigenization strategy, which is seen as the most important element of the said policy, work is being conducted to ensure that the energy sources being used, as well as the parts and equipment used in the production, consumption, and distribution of energy, have the qualities of being domestic and national.

Turkey’s National Energy and Mining Policy is built around three foundational strategies: indigenization, the security of energy supply and the formation of a foreseeable energy market.

2. What is the usage ratio of domestic energy resources in Turkey’s energy production?

Turkey has a rich potential in renewable energy resources, which are often referred to as domestic and national energy resources. Recently an important level of acceleration has been achieved to realize this potential and make the production and use of renewable energy a significant part of the economy. Wind, solar, and geothermal energy are among the foremost domestic and national energy resources of Turkey. While Turkey is comparatively lacking in fossil fuel resources, it heavily uses resources such as petrol and natural gas, and is richer in coal resources. Turkey’s annual coal production in 2018 was 101.5 billion tons -the highest in the history of the Republic of Turkey.

Upon examination of the resources used in energy production, it can be seen that in 2018 almost half (49.65 percent) of the total energy production in Turkey was sourced from domestic resources. Again, according to recent data, Turkey’s installed capacity increased by 4 thousand 25 MW in 2018, rising to the level of 88 thousand 551 MW in total. Furthermore, 93% of the said installed capacity was from domestic and renewable energy resources. The largest increases compared to prior periods were recorded in the fields of solar, hydraulic and wind energies.

3. Why is domestic energy production important?

Due to its limited petrol and natural gas resources, which have the highest share in primary energy production, Turkey’s dependency on foreign producers is around 70%. To reduce this foreign dependency, the search for alternative energy resources has intensified in recent years. Accordingly, the shift towards domestic and renewable energy resources in Turkey continues to grow. It is exceedingly clear that in order to decrease the risks in Turkey’s energy supply security, domestic energy production must be increasingly continued.

Another important benefit of domestic energy production for Turkey is that with the reduction of high foreign-dependency, energy spending is also correspondingly reduced. This point is especially important due to its effect of lowering the current account deficit and therefore the pressure on the economy. The annual energy spending of Turkey is on average 45 billion dollars. While this number has been decreasing lately due to the falling prices in international energy markets and the increasing domestic energy production, it is still at high levels.

4. What is being done to increase the use of domestic resources?

While Turkey is a rich country with respect to its potential for renewable energy resources, it currently falls short of adequately reflecting this fact in its energy production. One of the main obstacles in this field is technological insufficiency. The production of energy from aforementioned resources requires an advanced level of technical infrastructure. Due to this reason, the production and use of domestic equipment must also be incentivized in order to derive economic benefit from renewable energy resources. Increasing the domestic production of renewable energy technologies such as wind turbines and solar panels is especially important. Currently work is being conducted to increase training and education opportunities in order to address the qualified workforce problem being experienced in the sector.

The most important step that must be taken regarding coal, which is another domestic energy resource, is that exploration efforts for high efficiency coal and drilling activities should be focused on. Lignite, which is what comes to mind in Turkey as local coal, has low levels of calorific value. Due to this reason, the search for domestic sources of high calorific value coal necessary for industrial activities and electricity production plants continues. In this way the dependency on exported resources, which is already at a high level, is intended to be reduced. Furthermore, in order to reduce the high environmental damage caused by coal to the minimum, work is being conducted to bring clean coal technologies to the country and spread their use.

In this subject the correct steps to take would be the acceleration of investments that are required to harness the shale gas potential especially in the regions of Southeast Anatolia and Thrace and the expansion of Turkey’s ongoing offshore hydrocarbon reserve exploration efforts.

5. What are Turkey’s goals in the field of energy and how are they shaped?

Turkey’s goals in the field of energy can be categorized into two main groups. The first one of these are goals regarding the production of domestic energy, and the second are goals relating to Turkey’s intention of becoming a central actor in global energy trade.

Turkey has two main goals in the field of energy: producing domestic energy and becoming a central actor in global energy trade.

One of the most important goals of Turkey regarding energy is to become a center of trade in this field. Turkey, connecting the most important supply and demand centers in the world due to its geostrategic location, is one of the most important actors in the energy transfer routes spanning from the east to the west. Within this context it’s possible that the successes of projects such as TANAP and TurkAkım may be accepted as a reference point regarding Turkey’s potential as a center of energy trade. These will help Turkey’s progress towards the goals it intends to achieve.