Turkey's Operation in Syria as the Determinant of the Local Elections

All developments until now show that Turkey’s military operation in Syria may be one of the determinants of the result in Turkey’s upcoming local elections. 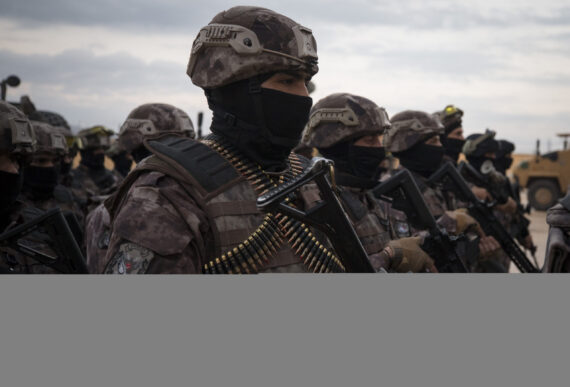 'Syria Task Force' linked to Turkish Directorate General of Security Special Operation Department are seen at their military quarters in Syria's Afrin after the town is cleared from YPG/PKK terror groups, in Aleppo, Syria on November 15, 2018. Anadolu Agency

Last week was very hectic for Turkey’s foreign policy agenda. U.S. President Donald Trump announced that the U.S. will withdraw from Syria after a telephone conversation he had with President Erdogan. Since Turkey has been very determinant on having another military operation in Syria towards the east of the Euphrates in order to wipe the U.S.-backed YPG forces out, possible outcomes of this withdrawal decision have been increasingly debated. How will Turkey renew its road map for a possible operation towards the east of the Euphrates under new circumstances? Will an ongoing balance of power among Turkey, Iran, and Russia change after the withdrawal? The answers to these questions are highly crucial to clarify the blurred picture.

In addition to its foreign policy agenda, the latest incidents created enormous effects in domestic affairs. It is obvious that one of the controversial issues in Turkey’s local election agenda will be the military operation towards the east of the Euphrates. Due to this reason, it is necessary to evaluate the positions of Turkey’s political parties and how they interpret this issue.

After President Erdogan clearly underlined that Turkey will pursue a new military operation in Syria, the deputy chairman of the CHP stated that his party will only support diplomatic and “peaceful” solutions rather than military operations in the region. Nevertheless, the party did not propose any recommendation for implementing a diplomatic solution for this long-standing intractable conflict, which has caused the death and displacement of millions. Kilicdaroglu, leader of the CHP, was also cautious about the possible military operation and underlined creating channels of dialogue. It is obvious that the CHP is taking a firm stand on this issue and is waiting for further developments. Furthermore, it is obvious that the CHP favors direct negotiations with the Assad regime in order to bring a solution to the conflict.

How will Turkey renew its road map for a possible operation towards the east of the Euphrates under new circumstances? Will an ongoing balance of power among Turkey, Iran, and Russia change after the withdrawal?

The HDP, on the contrary, is openly attacking the possible military operation of Turkey in Syria. The co-chairman of the party stated that Turkey and Russia should leave Syrian territories and that Syrian people should use their self-determination rights. Furthermore, the withdrawal decision of the U.S. was not found persuasive by the party due to the previous similar announcements of the U.S.

Contrary to the official statement of the party, HDP circles harshly criticized the decision of the U.S. through social media channels. They even initiated a petition campaign to the White House urging for the U.S. support the Kurds in its fight against Turkey. These circles define the Turkish army as “predator” and “invasive.” They claim that Turkey will invade Kurdish territories in Northern Syria and cause an irreversible human catastrophe. These groundless claims are also very popular in the Western media and are increasingly being circulated nowadays.

All developments until now show that Turkey’s military operation in Syria may be one of the determinants of the result in Turkey’s upcoming local elections.

It is obvious that Turkey’s possible operation towards the east of the Euphrates will be one of the hot topics of local election campaigns. Even if the CHP hesitates to take a firm stand under current conditions, it may instrumentalize Turkey’s possible military operation to criticize the government in the long-term. However, the HDP may take a harsher position, including mobilizing its supporters, like it did before. All developments until now show that Turkey’s military operation in Syria may be one of the determinants of the result in Turkey’s upcoming local elections.