Turkey's Opposition Falling Into the Trap of Populism

As a reaction, equilibrium or a kind of reparation with respect to the CHP’s left-nationalist voters, who are somewhat angered and irritated due to Muharrem Ince’s conservative-friendly and pro-Kurdish discourse, Ince makes use of populism. By this, he targets the Syrian refugees in Turkey while stating that he plans to send them back to Syria when he is elected president. 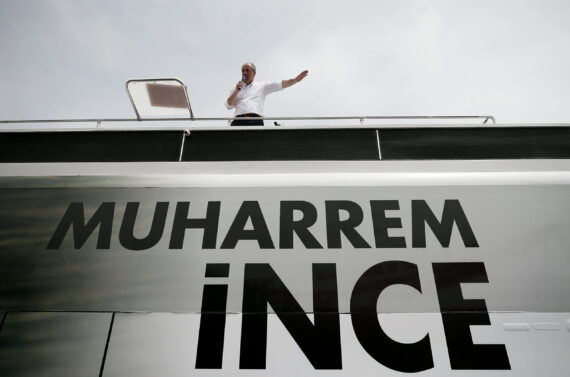 As Turkey is heading for elections on June 24, the presidential candidates of all major parties and their election manifestos have been announced. Even though the Republican People’s Party’s (CHP) presidential candidate, Muharrem Ince, is currently facing a tactical move by CHP chairman Kemal Kilicdaroglu, who actually excluded most of the current MPs close to Ince from the party’s new candidate list, it seems that Ince has postponed the so-called micro power struggle within the CHP until elections are over.

Apart from that, some positions and statements made by Ince during his campaign give rather the impression of a European far right party’s ambitions instead of a social democratic party, which aims to form the government. By focusing on Ince’s general standpoints, one notices that in order to win the votes of the Kurds in a less likely second round of the presidential election, he concentrates on the Kurdish issue. However, in addition to not mentioning any concrete suggestions regarding the Kurdish issue, he similarly tries to persuade the country’s conservative voters with some conservative and even Islamic symbols or habits. But as an equilibrium with regard to these two positions, he aims to consolidate his own secular and left-nationalist party base through populist promises – a move due to his controversial promises, which are perceived as concessions toward conservatives and Kurdish (nationalist) voters.

For instance, Turkey’s historical headscarf problem, which has finally been solved by the AK Party in recent years, has been addressed by Ince a couple of times during his speeches. While Ince argues that nobody has to fear that the headscarf ban will return, he seems unconvincing in the eyes of the conservative and religious voters due to his party’s anti-Islamic attitudes in the past. Ince’s current liberal position in this point is also not perceived with sincerity due to the fact that he does not apologize for any previous positions of his own and his party. It’s quite obvious that people still have in memory that even Ince himself once stood for his party’s radical positions like banning women with headscarves from all universities and public offices. What changed and why did this alleged change occur in the mind of CHP’s candidate?

Despite his liberal rhetoric, Ince has not yet apologized for his party’s radical positions that he himself stood for, such as the headscarf ban in public places. The public memory is still alive in this regard.

A similar issue concerns Ince’s attitude towards Turkey’s Kurdish issue. As stated above, Ince most probably plans to achieve the second round and hopes to win the votes of Kurdish nationalists who generally prefer the HDP. But one should keep in mind that some years ago the CHP even described the “solution process” as treason. Furthermore, Ince, as an individual representing the nationalist wing of the CHP, may have troubles to persuade Kurdish voters with sufficient promises. Even if he was to be successful, he will anger the nationalist base of the CHP and even the Iyi Party, whom he takes into consideration with regard to any possible second-round vote. But even if there was a second round one must not miscalculate that HDP voters would actually have to decide between the AK Party’s and CHP’s candidate.

A couple of years ago the CHP – Muharrem Ince then representing the nationalist wing of the party – described the peace process “treason.” Thus, Ince may have real troubles in persuading the Kurdish electorate.

As a reaction, equilibrium or a kind of reparation with respect to the CHP’s left-nationalist voters, who are somewhat angered and irritated due to Muharrem Ince’s conservative-friendly and pro-Kurdish discourse, Ince makes use of populism. By this, he targets the Syrian refugees in Turkey while stating that he plans to send them back to Syria when he is elected president. In addition, Ince underlines his words by promising that he will open a Turkish embassy in Damascus and start to talk with the Assad regime.

Ince’s populist promises and statements particularly concerning and even targeting Syrian refugees in Turkey does not fit in the universal perception of a social democratic party.

Thus, Ince’s populist promises and statements particularly concerning and even targeting Syrian refugees in Turkey actually do not fit in the universal perception of a social democratic party. Unfortunately, by having these standpoints and preferring very controversial statements he rather resembles the position of racist parties in Germany, Austria and the Netherlands. By targeting Syrian or any other refugees, the rise of xenophobia and far right sentiments among certain circles may be triggered. Nevertheless, it has to also be mentioned that in contrast to recent European examples, it’s rather unlikely that the high majority of people in Turkey, where approximately 3.6-4 million refugees currently live, will fall into a trap of anti-migration based populism.