The election results brought more space for maneuver for President Erdogan in domestic politics, but the foreign policy challenges are still crucial as they were in the pre-election period. 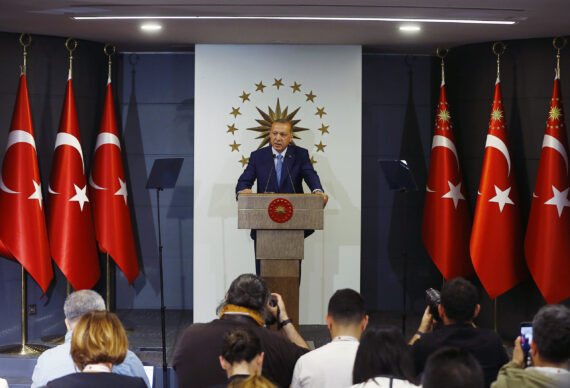 Turkish President and the leader of the Justice and Development Party (AK Party) Recep Tayyip Erdogan arrives to hold a press conference following the unofficial results of the presidential and parliamentary elections in Istanbul, Turkey on June 24, 2018. Anadolu Agency

The June 24 parliamentary and presidential elections marked a historical turning point for Turkish political life. Even though the AK Party lost its majority in the parliament (42,56%), President Erdogan won the presidential election (52,56% as the candidate of the People’s Alliance, in which the Nationalist Movement Party (MHP) is the key partner). The election result first and foremost showed that the process of democratic consolidation still matters for Turkish people – contrary to the criticism raised by the domestic and external opponents of President Erdogan. The election campaign was very competitive, and the outcome was uncertain until the very end. Compared to the turnout in Western democracies, the participation in the June 24 elections was very high, at around 87 percent, which represents the strength of Turkish democracy. More importantly, the eight participating political parties received almost 99 percent of the votes bringing all parties’ voices into parliament. This outcome is particularly essential to demonstrate justice in representation. The 2002 parliamentary elections represented only 45 percent of the votes.

The election results will be bringing new dynamics into Turkish political life and democracy, but the post-election foreign policy agenda of Turkey is more complicated and challenging than the election results in domestic political debates. Turkey has been massively struggling with the PKK in Syria and Iraq to protect its national security and territorial integrity since 2015. On the other hand, Turkey and the U.S. have divergent strategies towards the regional issues in the Middle East, and both administrations could not bring any comprehensive and concrete solution to restore bilateral relations.

The S-400, F-35, and pastor Brunson case are probably points that can turn into a major crisis while there is continuing agreement over Manbij. Turkey’s relation with the European Union is another foreign policy issue that both sides need to find a new framework of understanding in order to re-energize the already contested relations. All in all, from Russia to the Middle East, from Balkans to the Gulf region, post-election Turkish foreign policy has to deal with many crucial issues as the new governance model will be established in the upcoming days.

In the post-election foreign policy agenda of Turkey, Turkey-U.S. relations will be the main topic that both sides should re-think on the advantages and limits of bilateral relations. The existing foreign and security policies are not the same as they were at the beginning of the AK Party era in 2002, regarding the formulation of foreign policy, decision-making process and the issues that Turkey has had to deal with. More importantly, the geopolitical landscape of Turkey has changed fundamentally after the Arab Spring. In the post-election period, Manbij will constitute a critical threshold to see how both countries maintain their agreement and reflect it towards the eastern part of Syria, while Turkey wants to maximize its gains against the PKK in Iraq and Syria.

The recent criticism raised by EUCOM to the Pentagon that CENTCOM should be more careful in dealing with Turkey in the region is one of the important signals that the conventional perception towards Ankara is getting more favor in the U.S to shape the bilateral relation. As it has been indicated in EUCOM’s 2008 Posture Statement, Turkey is a strategic ally for the U.S. and NATO. It is believed that the Manbij agreement is not a consequence of the necessity of recalibrating Turkish-American relations, but it is the result of EUCOM’s “lobbying” over the Pentagon. The State Department is also another institution that wants to re-energize Turkey-U.S. relations as opposed to other anti-Turkey institutions. Trump’s way of thinking is another dimension that can bring a new modality of a relationship between Turkey and the U.S.

Even though these dimensions above of the bilateral relationship are enough to open a new page between the two capitals, the S-400 and Pastor Brunson cases will be the primary determinant factors in shaping the ultimate behavior of the U.S. towards Turkey. There is increasing pressure over decision-makers in Ankara, and the U.S. is doing everything possible to discourage Turkey from purchasing S-400s. The F-35 debate is therefore crucially important. As put forth in the National Defense Authorization Act for the Fiscal Year 2019, the U.S. insists on removing Turkey from the F-35 program. In the post-election period, therefore, Turkey should carefully rearrange its foreign policy priorities to maintain the strategic relations with the U.S. to protect its rapprochement with Russia, as well. Russia is almost as strategically significant as the U.S. in protecting Turkey’s regional security interests, particularly in the fight against the PKK.

Additionally, the Syrian crisis became an integral component of Turkish foreign policy, and it will be continuing as a strategic challenge shortly to see how Turkey will recalibrate its regional stability model in its near abroad. Protecting Turkey-held territories in Syria is one of the important dimensions for the post-election foreign policy priorities for Turkey. Maintaining the Turkish model regarding the issue of training, equipping and fighting together with local military partners will become more important to protect Turkey’s gains in Syria. The overall military and security dynamics are still the same in Syria.

Turkey will want to sustain the current agreement between Turkey, Russia, and Iran. There are two crucial dimensions that Turkey should also take into account: the direction of the Turkish-U.S. relations and the Russian position vis-à-vis Turkey’s presence in Afrin. The more rapprochements with the U.S. might bring more instability into to the Turkish-Russian relations. Therefore, the main challenge for post-election Turkish foreign policy will be the question of how Turkey readjusts a balancing approach in its relations with the two superpowers at the same time.

To avoid potential risks, especially in Turkish-American relations, Turkey and the U.S. both need to build a more interactive connection politically at a public level in order to contain probable misunderstandings. For instance, the working group established in the case of Manbij is a good example. Turkey and the U.S. also need to discuss the regional problems on a case-by-case basis, but in a complementary model and they should learn how to compartmentalize issues. Lastly, Turkey and the U.S. should step up cooperation in defense partnership by promoting collaboration in the defense industry.

There are many other foreign policy issues in the agenda of Turkish foreign policy including Turkey-Iran relations, Turkey’s strategic priorities in the Mediterranean Sea, Cyprus and many others. The election results brought more space for maneuver for President Erdogan in domestic politics, but the foreign policy challenges are still crucial as they were in the pre-election period.