The total value of the publishing market in Turkey is TL6.3 billion, which is approximately $1.8 billion. According to the International Publishers Association's (IPA) data, the Turkish publishing sector is the 11th largest in the world. 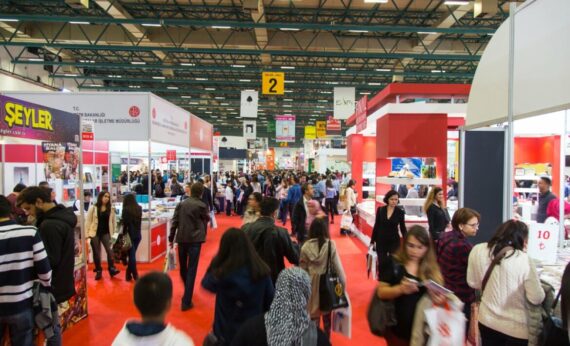 Turkey is the guest of honor at a major book fair that is to be held June 14-18 in South Korea’s capital Seoul. Taking close historical relations between Turkey and South Korea into consideration, it could be said that the fair will further improve relations between the two countries, especially cultural ties. Turkish culture and literature will be promoted via various activities during the fair. Additionally, a panel on the Korean War (1950-1953), for which Turkey had sent its military and lost more than 700 soldiers, will be held.

Turkey’s publishing expansion was not only due to active participation in the said fairs and being the guest of honor; in addition, Turkey started a program which encouraged the translation of Turkish literary works to other languages. The “Translation and Publication Grant Program of Turkey” (TEDA) is a program which subsidizes foreign publishers that want to translate and publish Turkish literature on culture, art and letters. By 2016, 2,312 books were translated from Turkish to various languages and published as a part of this program, which was established in 2005 by the Ministry of Culture and Tourism. There are translations even from countries like Vietnam, Iceland, and Burkina Faso. Languages that received the majority of grants are Bulgarian, German, Albanian, and Arabic, respectively.

All of these developments are directly connected with Turkey having a strong publishing sector. According to the latest data, in Turkey, 666,865,579 books were printed in 2016 and 404,129,053 labels were acquired.* 54,446 applications were made for an International Standard Book Number (ISBN). 16% of the published books in 2016 consisted of adult research and review books, while 5% were adult literature and art books, 8% were children’s and teenager’s books, 13% were religious texts and 56% were books on education.

More than half of the publishing market consists of educational books (51.44%), while 39.21% consists of books on culture that includes books on adult-fiction, non-fiction, religion, and children. Turkey currently has a ratio of approximately 8.4 books per capita, up from 8 books per capita in 2015. Moreover, the publishing sector’s steady growth despite the attempted coup of July 15 by the Gülenist Terrorist Organization (FETÖ) is striking. The total value of the publishing market in Turkey is TL6.3 billion, which is approximately $1.8 billion. According to the International Publishers Association’s (IPA) data, the Turkish publishing sector is the 11th largest in the world. Considering the figures, it is possible to say that publishing sector is one step ahead of Turkish economy’s world ranking.

At the most recent CNR Book Fair 2017 Turkish books’ publication rights for Arabic were sold to Arab publishers originating from 19 countries. Similarly, 30 publishers from Germany, the focal country of the fair, attended the last International Istanbul Book Fair. Beside attracting more professionals, these two fairs have certain shortcomings that should be addressed. The International Istanbul Book Fair is still having issues because of a politically balanced roster of publishers and authors. The CNR Book Fair, on the other hand, lacks institutionalization as it is fairly new. The Book and Culture Fair held throughout Ramadan and various local book fairs organized by municipalities also take place in Istanbul.

Turkey has progressed immensely in becoming a growing, democratizing and self-sustaining country in the last 15 years. Turkey increased its capacity by reforming numerous sectors; in other words, the country strived to achieve its potential. Economic stability that was established with political stability also contributed to the publishing and many other sectors. Book fairs in Turkey and abroad, applications for ISBNs, the number of published copies and the success of the TEDA program all indicate that Turkish publishing and literature can go even further.

* The free books (262,736,286 copies) distributed to primary and high schools by the Ministry of National Education do not require labels.

Mehmet Akif Memmi holds a B.A. in History from Middle East Technical University (METU). Memmi worked in publishing sector between 2010 and 2014. He is currently a graduate student at İstanbul Medeniyet University, Department of History and also works for SETA Istanbul as an editor.