The crisis in relations between Turkey and the U.S. is pushing Turkey to rethink its current foreign policy strategy and gives Ankara an opportunity to readjust its geopolitical portfolio. 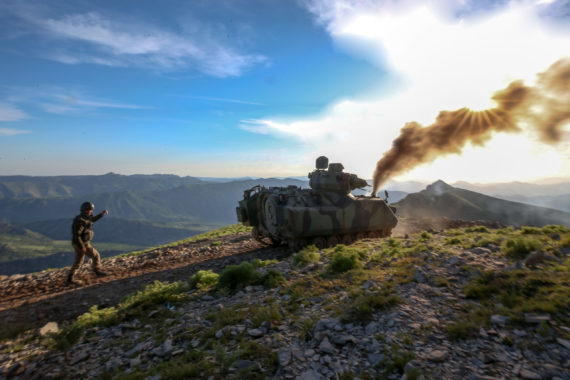 Many dynamics of political disagreements between Turkey and the U.S. over bilateral and regional issues have reached a crossroad that might lead to long-term strategic implications for both states. The nature of conflict is extraordinarily complex and the preceding discussion represents only a surface-level picture.

The U.S. administration has imposed sanctions against Turkish ministers and Turkey, has (and continues to) arm the PYD/YPG, which is known as the Syrian offshoot of the PKK – an armed terrorist organization that has been responsible for the deaths of thousands of Turkish citizens since 1984 and which is recognized as a terrorist organization by the United States in the fight against Daesh in Syria and Iraq – and more, the U.S. is currently hosting a so-called religious cleric who was the mastermind behind the July 15 military coup attempt that was orchestrated by Gulenist putschists.

At the center of the current crisis, the U.S. is requesting for the evangelist Pastor, Andrew Brunson, to be released from house arrest in Turkey and is trying to prevent Ankara from obtaining a Russian-made air defense missile system, which is scheduled to be delivered to Turkey by the end of 2019. More importantly, the U.S.’s new strategy in the wider Middle East region towards the Israeli-Palestinian conflict over the status of Al-Quds and the Iranian nuclear deal is not comprised of Turkey.

Against these policies, Turkey seeks to recalibrate its foreign and security policies by alternating its geopolitical portfolio not only on economic terms but also through its foreign and security policies. Recently, President Erdogan called for alternative foreign and economic policies for Turkey. In his article published by the New York Times, following the sanctions crisis, Erdogan underlined that “before it is too late, Washington must give us the misguided notion that our relationship can be asymmetrical and come to terms with the fact that Turkey has alternatives. Failure to reverse this trend of unilateralism and disrespect will require us to start looking for new friends and allies.”

Since 2002, the AK Party governments and President Erdogan have followed a multidimensional foreign and security policy by redefining Turkey’s regional and international role in order to reconstruct Turkey’s power status from a middle-range regional power to a big power, which could relatively be noted as a more assertive reformulation of Turkey’s role in the international system. Since then, Turkish foreign policy has been under fundamental transformation not only because of the changes in foreign policy mentality but also due to the regional and geopolitical turmoil emanating mainly from the Arab uprising.

In the post-Arab spring regional and geopolitical landscape, Turkey had to adjust its foreign policy strategy and reformulate its military strategy, especially in Syria and Iraq. In the early stages, the Arab spring was observed as an opportunity to recalibrate Turkey’s power in the region. However, following the diversification of the Syrian war and other regional developments, Turkey was barred from getting a new power status on the regional level.

The Middle East crisis articulated around the Arab revolutions and counter-revolutions were also perceived as an opportunity to reformulate Turkish strategy towards the Syrian crisis and security threats across the region. Throughout all the stages of the Arab uprising, the U.S. has been the main country that caused a strategic shift in Turkey’s preferences. Due to ambiguity in U.S. strategy, Turkey had to change its policy in regards to Syria, Libya, Yemen, Egypt, and Iraq.

The existing crisis between Turkey and the U.S. is a consequence of the Arab uprising and the U.S.’s strategic choices towards Syria, Iraq and other countries. However, this time Turkey perceives the bilateral crisis as a real opportunity to reformulate its geopolitical portfolio. Ankara believes that the U.S. is still a strategic partner in nature but the unpredictable nature of the new American administration and “institutional chaos” in the U.S. foreign and security decision-making processes drive Turkey to seek new alternatives. The perception here is much more important than the realities of strategic relations between Turkey and the U.S. More importantly, the Turkish government believes that if they want to reach strategic flexibility in international and regional politics, Turkey’s geopolitical portfolio should be reformulated.

The question is how Turkey will reformulate its new geopolitical game, and this can be understood by examining Turkey’s response to U.S. policies that have been encountered against the Turkish will. There are three broad dimensions for Turkish strategy. The first one is Turkey’s bilateral strategic engagements with alternative power centers. Russia is the most crucial power that Turkey can utilize in order to balance U.S. pressure in the short term. Russia is not an economic giant for Turkey, but in terms of the strategic implications over Turkey-U.S. relations, Russia might become an external balancer for Ankara against the U.S. There is already increasing rapprochement between Turkey and Russia over various issues. However, the nature of the conflict in Syria and historical geopolitical codes in Turkey-Russia relations need to be carefully taken into consideration by Ankara.

China is another alternative power for Turkey, especially when considering the need to deepen and diversify the Turkish economy. Turkey’s political and economic engagements with the rising power also constitute important alternatives for the geopolitical portfolio of Ankara in the near future. There has also been increasing foreign policy initiatives taken by Ankara to extend its diplomatic and economic relations with Latin American, African and Asian countries.

The second and probably the most important point here is Turkey-EU relations which have been under fundamental pressure for almost more than five years. Historically, Europe has always played a vital role in Ottoman diplomacy. Following the dissolution of the Empire, one way or another, European powers maintained a way to influence Turkish diplomacy and facilitated Turkey’s balance of power game against Soviet Russia. This time, Turkey can use European powers as an opportunity to readjust its geopolitical game vis-à-vis the U.S. There are two important aspects of Turkey-EU relations following the Turkey-U.S. crisis. Turkey, firstly, can use this opportunity to repair its institutional relations on the EU level. Secondly, Turkey can effectively join the European side in balancing the U.S. in the trade war and can especially contribute to European powers in reshaping NATO’s strategic mission while Trump holds a different view of NATO.

Last but not least, Turkey’s third option to alternate its geopolitical portfolio is the Middle East. The Middle East region is geopolitically important for Turkey in regards to protecting its national security, deepening its economic lifeline, and recalibrating Turkey’s international actor role by consolidating its military tools in the region. It seems that Iran is perceived as an important strategic partner by Ankara in the region but there are some limits as well potential risks for Turkey. The Gulf countries except the UAE seems a real economic life-line for Turkey. As the Qatar case shows, the more security investment in the region provides more space of maneuver for Turkey, especially on an economic level.

Within this context, therefore, it seems that the crisis in relations between Turkey and the U.S. is pushing Turkey to rethink its current foreign policy strategy and gives Ankara an opportunity to readjust its geopolitical portfolio.