Kids bully, fight, and cause problems if they are not restrained or incentivized by their parents. All this mess in the Middle East is mostly the result of this fight between regional powers in the absence of greater ones. 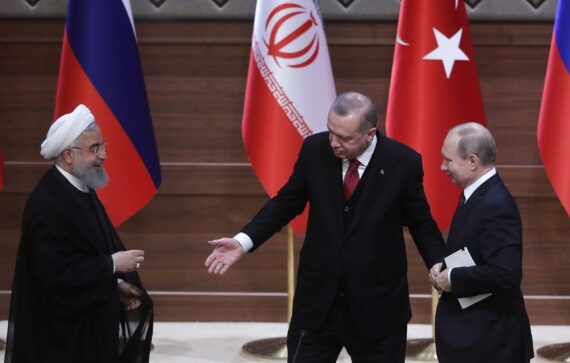 There is a lot going on in the international arena with respect to the power struggle both in terms of domestic and international politics. While on the one hand Trump is dealing with the legacy of John McCain – who passed away last week – on the other hand, his dealing with the growing risk of impeachment as the country is preparing for midterm elections for the entire House and one third of the Senate. The U.K. is still troubled with the post-Brexit referendum shock and is divided between the “done is done” camp and the “we can still go back” camp.

May is too stubborn and Corbyn is too commie for their respective critics, while Boris Johnson is not the savior for the blurry future for most citizens. Continental Europe is still troubled with the much-feared increasing immigration wave and the rising far right. Given these circumstances, China and Russia are expanding their spheres of influence, as the West is too troubled with its own domestic affairs and inner disagreements. The Western camp, if there is still one, needs to be led and given a direction, but that sign will obviously not come from Trump’s twits.

All these leading (or used-to-be-leading) countries of the West also lack the motivation and means to bring order to the Middle East. Such an agenda is not on the table for Russia or China either. Given this reluctance, there seems to be no easy solution for the blood spilling in Yemen and Syria amongst others. While global powers are too busy, and hence, too reluctant, to deal with problems in the Middle East, regional powers come forward and try to fill in this vacuum.

While Russia is digging deeper roots in Syria, the U.S. is doing little more than nothing to counterbalance it. However, there are others who are trying harder to assume the job of counterbalancing – namely, Iran, Israel, and Saudi Arabia. Kids bully, fight, and cause problems if they are not restrained or incentivized by their parents. All this mess in the Middle East is mostly the result of this fight between regional powers in the absence of greater ones. Regional powers from Iran to Israel and Saudi Arabia have bigger sponsors in the global scale and a sustainable regional order will require a deal between such global powers as well. Although it seems that Iran is the winner in reaching out to a whole new range of locations from Iraq to Yemen, this is also problematic as Iran’s expansion attracts Saudi and Israeli reactions – who target Iran’s proxies, or sometimes Iranian troops directly. Further, Iran also seems to be overstretched, which causes financial problems and public outrage domestically.

As a regional power, where does Turkey stand in all this mess? Turkey seems to have two concerns. Its first and most immediate concern is twofold: Turkey does two things to deal with its primary concern of eliminating PKK terrorism; (a) hit the PKK wherever you can and clean the areas under its control, and (b) if you cannot hit the PKK due to U.S. sponsorship – as in Eastern Syria – contain the PKK geographically and do not let it consolidate its power in the contained area.

Turkey’s second concern is bigger in scope. Turkey wants stable and friendly countries in the neighborhood. This second concern is politically motivated (i.e., to create trustable partners in the region), defensive (i.e., to prevent and preempt destabilizing developments before it reaches its own borders), and sort of humanitarian (i.e., to end the humanitarian crises in the region). For these reasons, Turkey supports some excluded or repressed groups in the region. These groups include Turkmens in Iraq and Syria, Sunni Arabs in Syria, the social forces following the legacy of the Brotherhood (Ikhvan) in Egypt, and Palestinians in the occupied territories of Palestine.

Turkey’s means to support these groups against the host states range from direct military action, as in the case of Syria, to diplomatic pressure, as in the case of Israel and Egypt. Turkey also uses military force in Iraq, but not to change the structure of the Iraqi state and stop some kind of repression, but for the mere goal of defending itself against PKK terror attacks from within Iraq. In the midst of such global and regional trends, Turkey’s job is not easy and its possible routes will be the focus of this column in the upcoming weeks.