The relationship between President Erdogan and Donald Trump may help find a solution to S-400 row. However, many uncertainties in the region may lead to new other crises between the two. 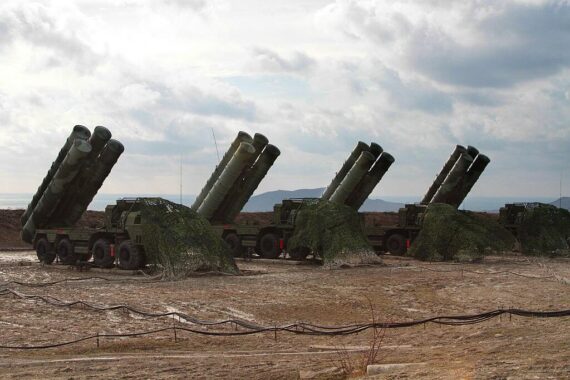 Two parties are simply arm-wrestling to prove their points in a historical evaluation process of their alliance in the rapidly changing age of the new international system.

Since the July 15, 2016, failed coup attempt in Turkey, bilateral relations between Turkey and the U.S. have been deteriorating. The recent S-400 conflict may lead to a new phase of relations between the two NATO allies. The cause of this conflict is Ankara’s determined stance in buying S-400 air defense missiles from Russia. In return, the U.S. has threatened to apply CAATSA sanctions on Turkey and remove the country from the ongoing F-35 project, which involves 8 countries in total.

How did this happen in the first place? Merve Seren – Associate Professor at Yildirim Beyazit University, Ankara, argues that Turkey has been using Nike Hercules and I-HAWKS defense missiles, dating back to the 60s technology, with an updated version of i-hawks (improved hawks). However, Ankara’s neighbors have all been updating their defense systems and this has proved as a serious threat to Turkey’s national security.

Ankara’s neighbors have all updated their defense systems and this has proved as a serious threat to Turkey’s national security.

Merve Seren highlighted how Turkey declared the need of a new defense system to its NATO allies back in 2006, before the Syrian Civil War kicked off, but that no serious development took place. After the break out of the crisis in Syria, Turkey’s need of an updated defense system became vital and therefore Ankara asked for offers from producing countries. Based on price, delivery time, co-production and various other criteria, China initially won the bid. However, the contract was cancelled due to pressure coming from the U.S. administration at the time.

Merve Seren also notes that in 2015, Turkey requested missiles from NATO. Batteries arrived, but Seren adds that due to differences among Turkey and other NATO allies in their policies towards the ongoing Syrian crisis (e.g. buffer zone, YPG/PKK), batteries were removed from Turkey in 2016. According to Seren, these developments isolated Turkey among its NATO allies, which is why the country had to seek to purchase an alternative system.

The alternative came from Russia. After the Russian plane crash incident, Russia and Turkey declared a strategic alliance to find solutions to the Syrian crisis. The Turkish government signed a deal with Russia and purchased S-400 missiles to be delivered in July 2019. Meanwhile, Turkey conducted two successful military operations in Syria with the support of Russia.

The issue is not about F-35s or S-400s; the real issue is the balance of power in the region.

According to TRT Middle East producer Muhammad Valid, the issue is not about F-35s or S-400s; the real issue is the balance of power in the region. Turkey and Israel are the two most important military powers balancing each other in the region, together with other regional actors. Since the Obama administration, the U.S. has wanted to keep Turkey weak and fragile, as opposed to increasing support for Israel. Valid adds that “Keeping Turkey weak would prevent President Erdogan from criticizing Netanyahu and Sisi – two close allies of the U.S.”

Similar to Merve Seren, political analyst at TRT World, Yusuf Erim, argues that Turkey has been left alone by the U.S. administration during the process. He gives the example of cancelled Sig Sauer hand-guns to Turkish President Erdogan’s security guards. Erim argues that the U.S. strategy to keep Turkey fragile forced the latter for an alternative, and when Turkey did try alternative defense systems, the U.S. applied political pressure. This is why the HQ-9 contract with China was cancelled. However, Erim notes that this time round Turkey did not only engage with Russia to purchase S-400s, but is in a strategic cooperation, which is why Ankara did not cancel the contract on this occasion.

The experts we have contacted confirm that the S-400 row between the U.S. and Turkey can be solved technically by a joint group from both sides.

At the moment the U.S. administration is forcing Turkey to cancel the contract, claiming that the placement of S-400s in Turkey and F-35s flying over them is “incompatible.” The experts we have contacted so far including Merve Seren, Muhammad Valid and Yusuf Erim, confirm the possibility to some degree with some objections, but they all seem to think that the issue of security can be solved technically by a joint group from both sides.

According to records, President Erdogan and Donald Trump had a phone call and discussed the joint group option regarding the procurement of the S-400 defense system at the end of April. During a meeting held on May 1 in Ankara, Turkish Defense Minister Huluski Akar emphasized this point to U.S. Special Envoy for Syria, James Jeffrey. During an interview, Akar stated that the cancellation of Turkey’s order of F-35s (100 planes) or removal of Turkey from the F-35 project are both against international law and would damage both the project’s future as well as the companies and countries involved.

Yusuf Erim and Muhammad Valid confirm that the removal of Turkey from the F-35 project will affect the future of the project in a negative way. In the first place, Erim argues that the project has already been delayed enough, and that the removal of Turkey from the project will further delay the process for at least two years. This would have a negative impact on the confidence of the companies and countries involved. Secondly, while there are some technological problems in the project, it is not easy to remove Turkish companies from the project as these companies are producing critical parts that require years of know-how knowledge and experience. Finally, Turkey has the advantage of using F-35s in real conflicts toward the threats from the south, test the product, record valuable information about the product and its combat capabilities. According to Erim, this point is quite important for the market confidence in F-35s. Therefore, he argues that the U.S. will keep Turkey inside the project and deliver the F-35s.

Buying F-35 does not mean Turkey can use the planes wherever-whenever. The joint system of F-35s does not allow you to act independently but only together with the U.S.

Merve Seren adds that buying F-35 does not mean Turkey can use the planes wherever-whenever. The joint system of F-35s does not allow you to act independently but only together with the U.S. In other words, buying F-35s does not give property rights to Turkey – there are only 4 countries that have this right: Israel, South Korea, Japan, and Singapore. Seren specifically highlights that purchasing S-400s would not cause Turkey to leave NATO, but rather that both NATO and Turkey will benefit from this purchase. She also adds that the locations of deployment of S-400s is quite crucial in this process. Seren argues that it is important to highlight the fact that Turkey is not a threat to NATO or the West. In fact, Turkey is protecting NATO’s western borders in the hardest line of alliance and without Turkey’s strong stand, Europe would face greater threats.

Muhammad valid argues that the U.S. administration will sell F-35s to Turkey, but that if F-35s do not arrive to Turkey, then the latter could purchase SU-35 from Russia, which are more practical, cheap and one of the best air superiority planes in the market. In fact, he adds that F-35 is not an air superiority plane (like SU-35), but a multi-function plane.

If F-35s do not arrive to Turkey, then Turkey could purchase SU-35 from Russia, which are more practical, cheap and one of the best air superiority planes in the market.

Yusuf Erim argues that the U.S. sees the situation as damage to its reputation and does not want this product to be sold to Turkey. Erim states that according to Americans, the issue has become one of precedent, which allows for Russia to emerge as a competitor in the military industrial market. Therefore, they are forcing Turkey to cancel the deal. Erim argues that the U.S. administration describes the situation as Russia selling a ‘big ticket item’ to an important NATO ally for the first time in history.

The S-400 crisis is just one of the many differences of opinion between Turkey and the U.S. Other areas of differences include the YPG/PKK existence in northern Syria, excessive U.S. support for Israel, and U.S. sanctions on Iran. Both sides are changing their policies according to their new position in the rapidly changing developments both in the region and the world. However, Turkey, which declares a strong defense system is vital for its national security – based on the developments in the region – seems to have the upper-hand in the wrestle, as opposed to the U.S., which is basically trying to keep an ally under control. The relationship between President Erdogan and Donald Trump may help find a solution to S-400 row. However, many uncertainties in the region may lead to new other crises between the two.

Also Read
The Strategic Value of UCAVs for Turkey