Turkey’s Secularists and Separatists Hand in Hand to the Ballots

What did the CHP and Iyi Party promise the HDP in order to receive support? No representative from either party is ready or has any courage to answer this very question. But this does not exclude the actual feelings of CHP, Iyi Party and even Felicity Party voters. How will they react against such weird efforts to collaborate with a de facto separatist party? 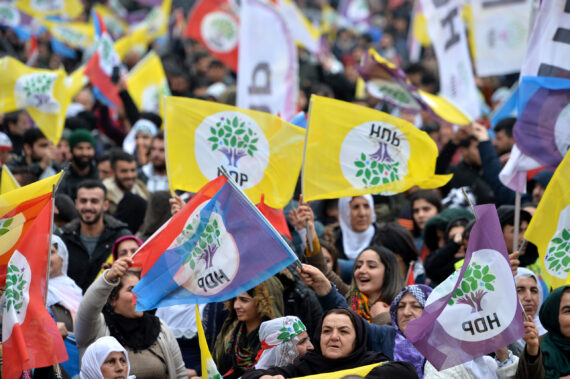 Turkey’s local elections will take place this Sunday. With this piece right before the elections, I would like to stress once again the most controversial component of the Nation Alliance, namely the HDP. It is well-known that Western media outlets deliberately disregard the Kurdish-nationalist HDP’s obvious ties to the PKK terrorist organization. The most salient feature of HDP’s strategy for the local elections is the tacit character of the alliance they have joined. Neither the HDP representatives nor their allied parties have the courage to openly and publicly state this alliance, ironically due to possible criticisms to be received from their voter bases.

Turkey held its previous local elections in 2014 when the HDP seemed to be in favor of solving the “Kurdish issue” by allegedly persuading the PKK terrorist organization to give up its arms, stop terrorist attacks, and leave Turkish territory. However, this did not happen and in contrary, the PKK started its bloody attacks in various Turkish cities subsequent to the June 2015 elections. The HDP did not criticize these attacks and made efforts to discredit the government by spreading false information.

The upcoming local elections in Turkey will be the first after it became obvious that the HDP is just acting in line with and on behalf of the PKK. It’s worthwhile to be on the watch for the election results in the eastern part of the country on the evening of 31 March.

It is difficult for any rational mind to believe the PKK’s narrative that the Turkish government started the fight  as a reaction to the HDP’s “success” subsequent to the June 2015 elections. This argument clearly disregards the unwillingness of the PKK to dissolve itself or to leave Turkey. Discussing this point further and further is a waste of time because of the continuing pre-designated stance by the HDP and PKK supporters against the Turkish government. Moreover, it’s almost impossible to conduct a reasonable debate with obvious supporters and admirers of a terrorist leader such as Abdullah Ocalan/Kurdish left-nationalists and also with Turkish Marxists who are sympathetic to the HDP – just due to one dominant reason, namely, of having a personal or ideological “problem” with President Erdogan. One must also not forget that between 2014-2016, many HDP-led municipalities openly supported the PKK’s ambitions in certain cities and even provided financial and logistic support. Although Western media outlets do not address these issues, it is also a known stance that HDP politicians do not accept the PKK as a terrorist organization.

Foreign observers should keep in mind that these will be the first local elections right after it became obvious that the HDP is just acting in line with and on behalf of, the PKK. In this context, the electorate’s decision, particularly in the Eastern part of Turkey, should be watched on the evening of 31 March by considering the previous period of 2015-2019.

There is also an obvious and general weirdness regarding the HDP as a political party per se. Although the party is based on an electorate partly consisting of Kurdish nationalists, along with culturally conservative reflexes, the party is mistakenly perceived as a leftist-secular democratic party. This perception is above all boosted by Turkish leftist journalists, intellectuals, and academics, who were previously oriented in radical Marxist and socialist circles. However, presenting the HDP as a main supporter of universal human rights is mere ultimate wishful thinking.

HDP is perceived as a leftist-secular democratic party chiefly by Turkish leftist journalists, intellectuals, and academics, who were previously oriented in radical Marxist and socialist circles.

In such cases, it is perhaps usual for Western observes that are “left-biased” and secular journalists, who are also absurdly uncritical of the authoritarian-exclusive Kemalist ideology, to applaud and praise the former chairman of the HDP without any criticism regarding his separatist ambitions, his playing down of PKK terrorism, his sympathy to jailed PKK leader Ocalan, and his general ambivalent stances, such as even considering to form a coalition with nationalist MHP (in 2015). As mentioned above, besides foreign media representatives lacking analyses, there are also some Turkish voices who disregard all these facts by regularly creating a false image.

Another point that must be mentioned is HDP’s ambivalent stance and bias in order to collaborate with Turkish political parties, which have very different ideological perceptions. It seems that a certain kind of hatred with regard to current government cadres reached a new peak. Actually, the Kurdish-nationalist HDP was eager to establish a coalition government right after the June 2015 election, when Kemalist-secular CHP invited HDP and the nationalist MHP to form a coalition. MHP chairman rejected these ambitions while CHP chairman Kilicdaroglu did not have any problem with collaborating with the HDP.

Similarly, the CHP has established a de facto alliance with the HDP for the upcoming 31 March local elections. Former HDP chairman recently declared that the HDP will support CHP and Iyi Party candidates in the West. But the question should follow: What did these two parties promise the HDP in order to receive such support? No representative from either party is ready or has any courage to answer this question. But this does not exclude the actual feelings of CHP, Iyi Party and even Felicity Party voters. How will they react against such weird efforts to collaborate with a de facto separatist party?

The evening of 31 March will show.