The Student Oath decision of the Council of State was perceived as taking a step back from democratization efforts and turning to the old habits where judicial power acted as the guard of the Kemalist regime and intervened into politics. 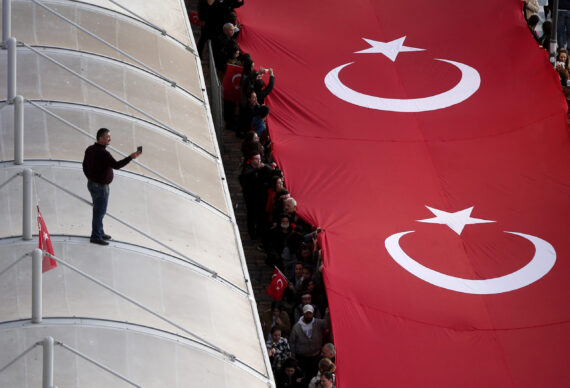 Each student had to proclaim the oath, whose 1997 version reads the following:

“I am a Turk, honest, and hardworking. My principle is to protect the younger to respect the elder, to love my homeland and my nation more than myself. My ideal is to rise, to progress.

My existence shall be dedicated to the Turkish existence. How happy is the one who says “I am a Turk!”

After the decision made by the Council of State, the issue has been discussed through various dimensions. On the one side, there are supporters of the decision, believing that the Student Oath is necessary in order to safeguard nationalist and Republican values. Some circles view the decision of the Council of State as a revival of the Kemalist ideology in Turkey, while some others focus on how it provides nationalist sentiment among Turkish children. Members of these groups insist on the revival of the Student Oath although the judicial process has not yet ended.

On the other side, there are opponents of the decision, who believe that this will create deficiencies on the rational thinking capabilities of children, by forcing them to obey the rules and commit their “assigned duties.” Some in this group underline the deep-rooted effects of collectivism on their generation and the dilemma between their feelings and imposed ideas, which caused bigger troubles for them in the following years of their lives.

Women who I have spoken to harshly criticize the decision made: “Are we going to promote self-development and individuality or top-down values on children? Since the practices of the early Republican period forcefully focused on the understanding of top-down and unilateral values, this oath does not create individuals that are capable of internalizing rational decision-making in their lives. If the decision of the Council of the State is implemented, the following generations will also carry this burden.”

Some people in this circle are also uncomfortable with the nationalistic emphasis in the text. The oath was originally written in 1933, at a time when the nationalist tendencies were on the rise in Europe, as well as in Turkey. Some opponents pay attention to this fact and state that there is a necessity for a major revision in the nature of the text if the sides insist on its obligation. While the original text has been subject to major changes, these did not transform the substance and only covered the linguistic modifications of the text.

Opponents of the Student Oath are also worried about the reversal of further democratic gains, such as the removal of the headscarf ban in public spaces. The AK Party has taken significant steps towards democratization of Turkey in political, social, and economic areas. The removal of the Student Oath was one of the examples of these democratization efforts. The decision of the Council of State was perceived as taking a step back from these efforts and turning to the old habits where judicial power acted as the guard of the Kemalist regime and intervened into politics.

Even though the Council of State made a decision on the Student Oath, judicial processes have not yet ended. The Ministry of Education has appealed to the superior court and it will take some time for the final decision to be received. However, it seems that this issue will remain high on the political agenda in Turkey for a long time.