Turkey's Syria Strategy after the US Withdrawal 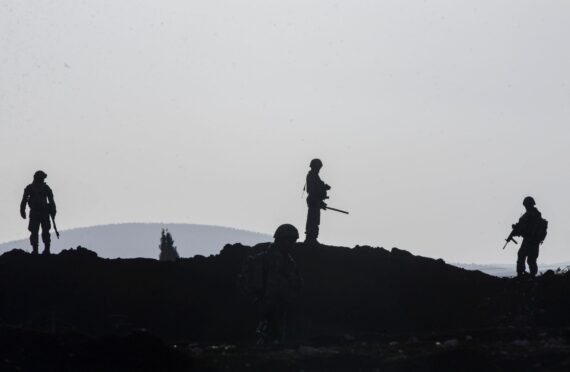 The U.S. withdrawal symbolizes a new phase for local and regional actors in Syria. Particularly for Ankara, the U.S.’ “slow and coordinated” pull out strategy, which involves 2,000 troops in North East Syria, is a game changer; it was an unexpected move that no one saw it coming two weeks ago in Ankara. However, President Erdogan had a very strong expectation that President Trump would take responsibility to reshape Turkish-American relations before it would be too late. He never gave up on maintaining his communication with President Trump.

The mobilization of Turkish troops and the declaration of high military readiness in the region following Erdogan’s Ankara speech was a direct message not for the YPG but for the U.S. government to change its policy towards the YPG. More importantly, Turkey’s unexpected yet comprehensive air strike against PKK positions in Northern Iraq was a strong sign that Turkey would extend same military campaigns against YPG positions in Syria. In this regard, it was the last chance for the Turkish-American relations to reevaluate the escalation on the YPG issue. Otherwise, Turkey would have been militarily involved in the North East Syria where the U.S. has been operating alongside YPG forces. During the phone call on December 14, as it is claimed, President Erdogan strongly stressed Turkey’s position on military action, and it was followed by Trump’s decision.

At this stage, the operational and strategic dynamics, as well as the new geopolitical calculations among the actors involved in the Syrian conflict should be reconsidered. The post-American Syria revealed the dynamics, especially for Turkey. Hence, President Erdogan should reevaluate his overall strategy on Syria. Turkey’s priority, as president Erdogan repeatedly expresses, is to eliminate the YPG threat for Turkey’s imminent national and regional security concerns.

The cooperation between the U.S. and the YPG, and the U.S. operational military presence in NE Syria were some of the important dynamics that restricted Turkey’s freedom of military action against the YPG. Trump’s withdrawal means that Turkey gained freedom of military action in eastern Syria, yet the development brings a challenging road-map for Turkey to achieve its strategic priorities. If Turkey delivers its priorities on the ground and redesigns the current balance of power, the Syrian conflict is likely to be reshaped soon.

Following the cleaning of the Manbij pocket from the YPG forces, Turkey will reach its initial goal to take full control alongside its border in the western part of the Euphrates River. This might bring Turkey freedom of military action not only to reshape the overall region including Idlib but also to accommodate refugees.

The challenges that Turkey has to reconsider are multidimensional. First and foremost, what type of military move, in an operational manner, that Turkey will adopt following the U.S. withdrawal is significant. It seems that Turkey’s first military mission is to establish a full-scale military control in the Manbij pocket where Turkey and the U.S. had already agreed, yet the YPG maintains its presence there. The intense military mobilization of Turkey and Turkey-trained National Army near the Turkish border and inside Jarablus demonstrate that Ankara will take military action in Manbij.

Even though the regime tends to mobilize its militias towards the Manbij pocket to retake the city from the YPG, Turkey certainly perceives Manbij as a military threshold to maintain its military deterrence. At this stage, deterrence for Turkey is the use of threats to dissuade the Syrian regime from initiating an undesirable act in the region. Following the cleaning of the Manbij pocket from the YPG forces, Turkey will reach its initial goal to take full control alongside its border in the western part of the Euphrates River. This might bring Turkey freedom of military action not only to reshape the overall region including Idlib but also to accommodate refugees. Up until now, 300,000 returned to their homes in the western part of the River.

Following the takeover of Manbij, Turkey’s second military move against the YPG is expected to be alongside the border. This military operation will have a different character as the YPG would probably want to defend Ayn Al Arab (also known as Kobane), Rasul Ayn, and Tel Abyad against Turkey’s military action. The YPG’s search for a new ally at this stage is one of the significant steps that can influence Turkey’s potential military action, yet it seems that no credible actor at this stage can prevent Ankara from taking military action in these regions.

The strategy that Turkey might adopt following the liberation of Manbij has two broad aims. While the first aim for Turkey is to disassemble the YPG’s territorial continuity alongside the Turkish-Syrian border, the second one is to provide a safe haven for the refugee community who were forcefully displaced by the YPG. If this will is the case, Turkey is set to accomplish its original aim to establish a secure zone alongside its Syrian border. This also means that fighting against Daesh is a secondary mission that should be carried out following the establishment of a safe zone for Turkey’s military presence.

This probably brings the third dimension for Turkey’s post-American roadmap in Syria. Fighting against Daesh at this stage is a complicated issue from a military perspective in which Turkey has the capacity, yet the geographical distance where Daesh militants operate makes Turkey’s military engagement riskier. While Turkey was calculating a limited military operation against the YPG in its borderline, now Turkey has to reconsider its military strategy.

This requires a comprehensive counter-insurgency strategy for Turkey to clean the area from YPG and Daesh, hold the liberated territories to sustain military presence and finally to build the post-conflict places. More importantly, Turkey’s potential far-reaching military operation towards the southern flank of Syria might also bring the Syrian regime, Russia and Iran into the geopolitical rivalry in the region, which is a situation Turkey would not want to get into. Russian Foreign Ministry spokesperson said that “Syrian government should assume control of areas vacated by the U.S.” This means that Russia does not tend to accommodate with Turkey’s own roadmap for the post-American withdrawal. Therefore, cooperation with Russia and the U.S. is the most significant part of Turkey’s strategy in NE Syria.

The game changer development for Turkey would be a potential and quick dissolution of the Syrian Democratic Forces. If the non-YPG forces (mainly the Arab forces) inside the SDF decide to detach themselves from SDF, then Turkey’s strategy has to take the Syrian regime’s move towards the eastern part of the Euphrates into account

The game changer development for Turkey would be a potential and quick dissolution of the Syrian Democratic Forces. If the non-YPG forces (mainly the Arab forces) inside the SDF decide to detach themselves from SDF, then Turkey’s strategy has to take the Syrian regime’s move towards the eastern part of the Euphrates into account, which poses another trouble, not just for Turkey but also for the U.S.

The Syrian crisis is fundamentally localizing geopolitics, in which each actor has strategically different priorities regarding every single terrorist formation in Syria. Trump’s decision brought many opportunities to repair especially the U.S.’s wrong strategy of working with a terrorist organization to fight against another terrorist organization, but at the same time brought Syria into a new rivalry between the regional countries. Undoubtedly, Turkey needs a comprehensive strategy for its Syrian road-map following the American withdrawal.