While speaking at an award ceremony at the Ankara Chamber of Commerce, President Erdogan said, “It won’t be a surprise if the Turkish economy grows by more than 6 percent. Probably around 7 percent in 2017.” 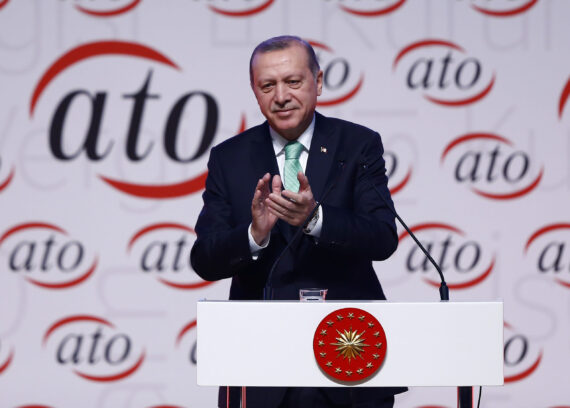 President of Turkey Recep Tayyip Erdogan gestures during his speech during an award ceremony organized by Ankara Chamber of Commerce at the ATO Congresium in Ankara, Turkey on November 27, 2017. Anadolu Agency

Turkish economy is set to record a growth rate of more than 6 percent in 2017, President Recep Tayyip Erdogan said on Monday.

While speaking at an award ceremony at the Ankara Chamber of Commerce, he said, “It won’t be a surprise if the Turkish economy grows by more than 6 percent. Probably around 7 percent in 2017.”

The expectations for higher economic growth have increased on account of the positive confidence generated by the economic growth that surpassed forecasts in first two quarters – 5.2 in first and second 5.1 in quarter, Turkish Statistical Institute (TurkStat) stated.

The International Monetary Fund (IMF) forecasts had already been signaling the positive outlook. Latest World Economic Outlook released before the annual conference of the IMF and World Bank, the IMF outlook set the forecast at 5.1 growth rate up from its earlier forecast of 2.5. World Bank has also upgraded its economic growth forecast for Turkey by 0.4 percent to 4 on October 19 from

Turkey achieved more than 20 percent rise in investments during the first three quarters of 2017, he said. “I suppose we will set all-time high record at the end of this year.”

President Erdogan added that country’s national income stands at $853 billion and it can reach $1 trillion with little efforts.

“Our goal is to rank among the 10 biggest economies of the world,” Erdogan said. The Turkish economy ranked 17th in terms of gross domestic product and 13th in terms of purchasing power parity, he added.