What Turkey needs to do in the post-local election period is to redraw its foreign policy priorities from a very pragmatic and practical way, refocus its reformist agenda in foreign policy, and obtain a balanced strategy. 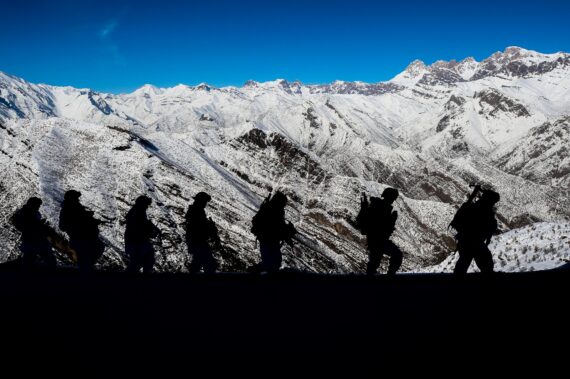 Turkish soldiers patrol at a mountainside during winter near Turkey-Iraq border in Daglica village of Yuksekova district of Hakkari, Turkey on January 20, 2019. Anadolu Agency

Turkey held one of the most important local elections this past week. The election campaigns were mostly shaped by Turkish foreign and security policies concerning the Syrian crisis, the PKK, and the fight against terrorism. The AK Party won the popular vote although it lost the major strongholds to the main opposition party. Istanbul, traditionally ruled by conservative parties since 1994, and the capital Ankara were lost to the opposition bloc, which was represented by a coalition called the National Alliance (In Istanbul, the re-count of votes are still ongoing and an official declaration will be announced by the YSK). It seems that the AK Party will continue dominating the Turkish political landscape via the 45% majority vote that it scored recently, which is unchallengeable by any other single party alone at this stage – It must be noted here that the People’s Alliance, consisting of the AK Party and MHP (Nationalist Movement Party), won the majority of the votes by 52%.

Winning Istanbul in 1994 was the first step of President Erdoğan’s long-term journey in the Turkish political sphere, in which he became the first political leader in Turkish politics who has stayed in power for more than 16 years. However, whether or not he has lost his first love, Istanbul– which he frames as Islambul, remains unclear not only because of the election result but also due to the changing nature of politics in Turkey. The result depends entirely on which side of the coin you look at to make sense of the result of the local election.

President Erdoğan remains Turkey’s most powerful leader while others’ approval individually is not more than 20% and more importantly, his ruling AK Party maintains its dominant party position in Turkish politics. While his rating is somewhat high especially compared to others, the results of the local election are taken seriously by him and high-level AK Party members on whether the AK Party should rethink its political strategy and narrative regarding current Turkish politics. This was highlighted by the President in his traditional balcony speech just after the local election while the result of Istanbul was unclear. He strongly underlined that the political message that his supporters wanted to give him was understood. He stressed that Turkey has serious challenges in its foreign and security policy, including the fight against terrorism and other regional issues such as Syria, and underlined that his term would continue for more than four years, where he and his ruling party would use their abilities to reshape Turkish politics regarding what AK Party supporters and the rest of the society would like to see.

After the election results on Sunday, President Erdogan strongly underlined that the political message that his supporters wanted to give him was understood.

President Erdoğan and his ruling party are aware of the reality that there is a mutually constitutive relationship between domestic politics and foreign policy. The subject of survival was articulated heavily during the election campaign where it held the dominant narrative. The concept has been a dominant reference point of Turkish domestic and foreign security policy for more than two centuries. However, in current Turkish foreign policy, the AK Party and President Erdoğan should focus on firstly, a comprehensive foreign and security policy strategy, rather than emphasizing the concept of survival. In international politics, survival is an integral part of understanding state behavior, and most believe that it is the ultimate behavior of state; and that states should seriously seek for the best strategy to survive. It is true that Turkey has many challenges stemming from its own geopolitical landscape and long-time allies, namely the U.S, but Ankara should rethink its foreign and security policies beyond the concept of survival.

The reason is simple; the future of the AK Party at home will be determined by its performance in its foreign and security policy, or vice versa. More to the point, the success of the AK Party came to be as a result of its ability to adjust the domestic-international balance simultaneously. It took Turkey’s EU journey into account: The EU agenda was one of the important determinants factors behind the rise of the “Turkish model” in the Middle East and beyond while domestic politics became free from military tutelage.

The concept of survival has been a dominant reference point of Turkish domestic and foreign security policy. But now the AK Party and President Erdogan should focus on a comprehensive foreign and security policy strategy.

There are three reasons why Turkey should be serious about its foreign and security policy. The first one is economic reasons, which President Erdoğan also emphasized would be the most important priority in the government’s agenda. The economy has been a crucial component of Turkish foreign policy for sixteen years which Turkey has enjoyed being a “trading state” where the concept is based on trade-driven integration strategies rather than security-driven foreign policy, especially in its surrounding regions. Under the shadow of current economic pressure, Turkish foreign policy has to recalculate its strategy and should find a new modality regarding how to recalibrate its economic relations to overcome the current economic upheaval. Turkey is still one of the most energetic countries in the MENA region with its dynamic economy, large population, the relative weight of its diplomatic influence over the regional issues and rising defense industry. There can be no ultimate strategic gain for Turkey without maintaining its economic rise in foreign affairs, and there is no economic gain without maintaining its diplomatic engagements.

The second reason is political stability, which President Erdoğan has been underlining its strategic importance to consolidate Turkey’s rise in international politics since he came to power. The post-local election period poses opportunities, as well as challenges, for Turkey’s gradual rise. The structural and political consolidation of the presidential system is the most challenging one. From a structural side, the institutional regulations in the post-parliamentary order are still dynamics where many institutions need to be properly relocated and redesigned. From a very political perspective, it is possible to argue that the election dynamics in Turkey have significantly changed; which indicates the possibility of an achieved bipolar balance despite the continued dominance of the People’s Alliance.

The local election emphasizes that there are many ways in constituting an alliance system between different parties irrespective of their ideological differences. From a truly pragmatic reading of politics; it reminds us of the well-known saying: “the ally of today could be your rival tomorrow.” Therefore, political stability under President Erdoğan for the next four years is strategically important, where domestic and international balance will mutually facilitate one another to keep political stability in Turkey since both the AK Party and MHP, strongly support the continuity of the People’s Alliance. The foreign and security policy of Turkey will be certainly influential not only to consolidate political stability but also to maintain the alliance between two parties.

There has been increasing radical-extremist political ideologies across to Europe which influences Turkey’s EU perspective but, securitizing Europe is not a good strategy for Turkey’s long-term interests.

The third reason is the combined foreign and security domain, in the scope of the upcoming practical issues in Turkey’s external affairs. First and foremost, re-energizing the Turkey-EU relationship, which has been poisoned by the rise of anti-Turkish politics and increasing unwillingness to have Turkey join the EU, particularly since 2013, is crucial. The EU has been the main determining factor, if not only one, behind the consolidation of Turkish democracy, including civil-military relations and basic human rights. Turkey and the EU should learn how to compartmentalize their relations. Under the current geopolitical upheaval stemming from BREXIT to Trump’s unwillingness towards both NATO and the EU, Turkey remains a strategically important powerhouse, especially with its crucial engagement with Russia, and political and military engagement to the Syrian conflict. Turkey, on the other hand, should not homogenize or categorize Europe only with reference to Islamophobia, far-right extremism, or Turkofobia. Yes, it is true that there has been increasing radical-extremist political ideologies across to Europe which influences Turkey’s EU perspective but, securitizing Europe is not a good strategy for Turkey’s long-term interests.

In addition to the EU/Europe, the Turkey-U.S. relationship is under significant challenges. The U.S. administration since 2013 has been repeatedly undermining Turkey’s national security interests by supporting the PYD-YPG in Syria and currently is threatening in retaliation for Ankara’s decision to move ahead with the purchase of a Russian air missile system. The foreign and security issues are not limited to the U.S. Turkey should be careful with regards to the PKK issue in Syria, but at the same time should not forget that the Middle East is bigger than the PKK. It does not necessarily mean that Turkey should not prioritize the PKK, as it is a high-level national security threat. Rather, it means that Turkey should consider the Middle East and its interests from a wider geopolitical perspective.

The EU has been the main determining factor behind the consolidation of Turkish democracy, including civil-military relations and human rights. Turkey and the EU should learn how to compartmentalize their relations.

The region is significantly transforming, the nature of actors in the region are dramatically changing and the geopolitical competition among the regional actors is getting more antagonizing. The regional system sends clear signals that Turkey should respond with caution. What Turkey needs to do in the post-local election period is to redraw its foreign policy priorities from a very pragmatic and practical way, refocus its reformist agenda in foreign policy, and obtain a balanced strategy.