Providing access to education ought to be the main target for international organizations, and that can only be achieved by enhancing and developing the capacity of local NGOs working in the field. Turkish NGOs are overwhelmed and much work has yet to be done. 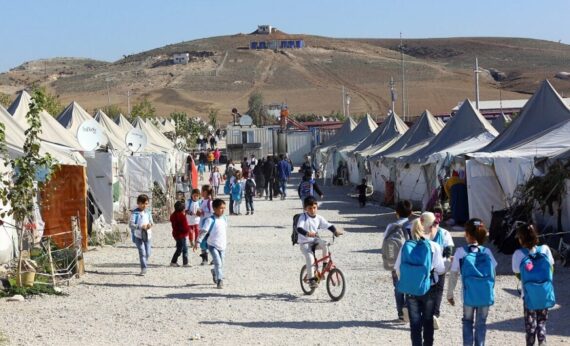 As the Syrian crisis unfolded throughout the country, massive waves of refugee influx were witnessed in the region. Turkey, an immigrant receiving country throughout history, had the largest share of refugees with over 2,700,000 Syrians. The Turkish government responded to the situation with an “Open Door Policy”; allowing every Syrian fleeing the war to stay in the country, knowing very well that this does not imply the end of suffering for Syrians. Once they had crossed the border, a new challenge was awaiting them. Gratitude goes to local NGOs that were at the forefront of hosting refugees and took the first initiative to establish a safe haven for those fleeing from an oppressive regime. Syrian refugees have certainly put Turkish NGOs to the test.

EnergyBy Büşra Zeynep Özdemir DAŞCIOĞLU
Turkish NGOs’ involvement in humanitarian aid traces back to the 1990s, where Turkish organizations went to the field during the crises in Bosnia and Kosovo. On top of that, the increased awareness towards human rights violations paved the way for the NGOs to focus more on topics such as women’s rights and refugee protection. The Marmara Earthquake in 1999 for instance proved the significance of civil society movements in Turkey and revealed the role of NGOs in promoting humanitarian values. Since then, the experience of Turkish NGOs became more inclusive and diversified. This awareness accompanied by political reconciliation with the EU has eased off to a certain extent the work of NGOs. From then onwards, Turkish civil society was far more organized and empowered.

When the crisis in Syria began, Turkey was not prepared to absorb such a large number of refugees. The international community was also caught off guard, as there were not any physical presence of international aid organizations to help in providing the basic humanitarian needs for Syrians. But local response did come through; groups and members of the civil society that are not affiliated with formal humanitarian agencies took on the burden of assisting Syrian refugees in Turkey. The Turkish government was also involved through the Disaster and Emergency Management Presidency (AFAD) in establishing refugee camps near the border that currently host around 250,000 people.

However, the majority of Syrians reside outside camps, and they have been in urgent need for even the most essential elements for survival. Upon that, the primary focus of the local response in the beginning was on providing emergency shelter and supplies to families in need. As it became clearer that the war in Syria will not be short lived, local NGOs have recently started to shift their focus on initiating long-term projects that would contribute to the personal development of Syrians, most importantly providing education to children.

As time passed by, international NGOs initiated their own response and came forward to support Syrians in their struggle for survival, with the primary focus being on providing sanitation, shelter, and distributing aid. Unfortunately, this matter was still not sufficient. Attention was mostly given to primary survival needs, to a level where other social needs were often disregarded. Because of that, children became the main victims behind the lack of proper attention towards education.

The number of school-aged Syrians surpasses 800,000 children. Even after six years of hosting Syrians in Turkey, the fact that over 40% of these children still remain out of school proves that this matter was not properly addressed from the beginning. Temporary Education Centers (GEM) host the largest number of Syrian children, with over 300,000. This clearly sheds light upon how important these centers, initiated by local NGOs, are in providing even a basic form of education for children. Local Turkish and Syrian NGOs have clearly proven themselves to be successful in establishing GEMs. Without them, efforts of the UN and other major donors are destined to fail, as those NGOs are the ones in charge of implementing such projects in the field.

International donors from around the world often have different humanitarian priorities. These differences are clearly visible in the failure of the international community to properly address the unfortunate situation of Syrian refugees. The UN has been mainly occupied in administering the urgent needs of Syrians. However, the time has come to direct more attention towards long term sustainable development projects through empowerment, education, and providing economic opportunities for Syrians to strive.

Unfortunately, other problems persist with international agencies in general. Due to their strict conditions on direct cash assistance to local NGOs, aid and funding has been mainly going to where it is most easily provided and not where it is mostly needed. Western donors lack the necessary flexibility to adapt to changes that arise in the field. The field is in constant change, particular assessment upon which assistance was provided may strongly differ by the time the required procedure takes place and aid arrives. That is why it is crucial for donors to be more flexible in allowing local NGOs to provide assistance where they deem is most needed.

Local NGOs and members of civil society have been by far more productive in achieving results than even the UN is capable of doing. Yet, governments and international organizations still find it hard to recognize the important role of NGOs, in a context of truly achieving a sustainable and adequate response to refugee problems. Collaboration ought to be enhanced on the national, as well as international level. This will facilitate coordination to anticipate any future refugee flow. To do so, Turkish NGOs need to work on establishing a refugee protection network to facilitate the exchange of information amongst themselves at the very least.

Turkey is a milestone within the global humanitarian system. The world could have certainly expended more effort to address the Syrian refugee crisis. Turkey has surely taken the initiative, except that it cannot face the challenge all by itself. An attempt ought to be made to put an end to the suffering of the most vulnerable. A global initiative under the name of “No Lost Generation” has already been launched to secure the future of Syrian children. The efforts of humanitarians and governments to strengthen the capacities and potential of young children is considered to be amongst the largest initiatives attempting to solve this situation. Yet more work needs to be done.

It is immoral to look upon the number of Syrian children as statistics – every child matters. Providing access to education ought to be the main target for international organizations, and that can only be achieved by enhancing and developing the capacity of local NGOs working in the field. Turkish NGOs are overwhelmed and much work has yet to be done. The fate of Syrian refugees rests on the shoulders of the international community.

Also Read
Türkiye Scholarships and the Scope of Turkish Diplomacy