Speaking to the reporters at Ankara’s Esenboga Airport before embarking on the US visit, PM Binali Yildirim said there were piles of files, enough to prepare for FETO leader’s extradition. “The judiciary in the U.S. should take immediate legal action and do what’s necessary,” he said. 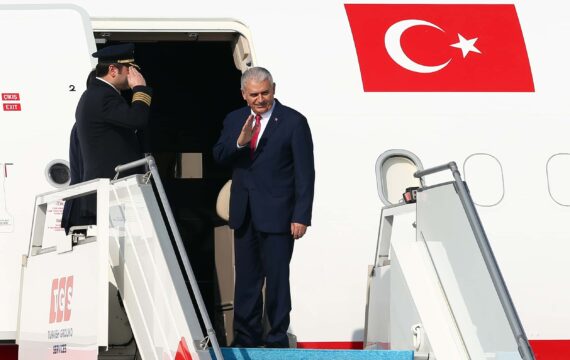 Speaking to the reporters at Ankara’s Esenboga Airport before embarking on the US visit, Yildirim said there were piles of files, enough to prepare for FETO leader’s extradition. “The judiciary in the U.S. should take immediate legal action and do what’s necessary,” he said.

250 people were killed and nearly 2,200 others injured while resisting the July 15 coup attempt in Turkey in 2016.

The visit of Turkish Prime Minister to the U.S. comes against the backdrop of the visa crisis between the two countries that was set off after Turkish staff at the U.S. mission were arrested two months ago for their ties with FETO. While the visa services were though partially restored on Monday, the PM’s visit is expected to further improve the relationship between the two NATO allies.

However, Yildirim promptly dismissed the statement made by the U.S. Embassy about “high-level assurances” from Turkey and that the country will give advance notice of any detentions or arrests of local staff members in the future.

Yildirim called for the respect for Turkey’s principles of law on the part of U.S., citing the example of the arrest of two bodyguards of Turkish President Recep Tayyip Erdogan on his visit to the U.S.. “The legal process is underway in line with the principles of the state of law in both countries. Therefore, negotiations demanding mutual assurances are not needed,” said Yildirim.

The agenda of the visit where Yildirim is expected to meet U.S. Vice President Mike Pence to discuss a range of issues which include Syria, Iraq, FETO, PYD, YPG, and refugees.

Appearing in court were 221 suspects in the General Staff case, 486 suspects in the Akinci Airbase case, and 239 suspects in the Military Academy case. Also, the trial of 330 suspects from the 58th Artillery Brigade along with the Artillery and Missile School Command in the capital Ankara’s Polatli district is also continuing.

In two separate criminal courts in Sincan, 317 suspects and another 244 suspects in the Gendarmerie Schools Command Case appeared before a judge.

During his hearing, Sonmezates refused to answer any questions from the judge or prosecutors.

Tensions in the court room later rose as some of the complainants and suspects were evicted from the courtroom.