During his visit to the US, Turkish Prime Minister warned that there is no difference between the Fetullah Terrorist Organization and Daesh. 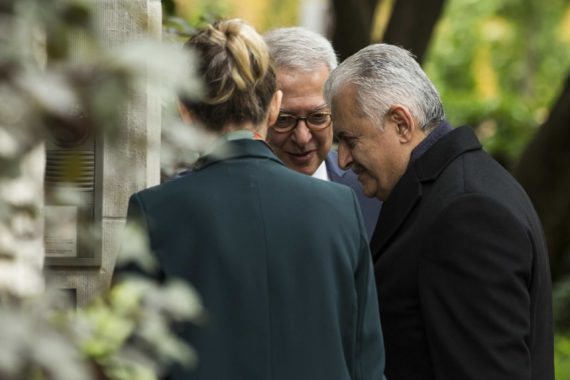 Turkish Prime Minister Binali Yildirim is greeted by Ambassador Serdar Kilic and his wife as he arrives at the Turkish Ambassadors Residence for meetings with Turkish community leaders in Washington, United States on November 8, 2017. Anadolu Agency

During his visit to the US, before his meeting with Vice President Mike Pence, Turkish Prime Minister Binali Yildirim visited the Diyanet Center of America (DCA), also known as the Turkish-American Community Center and Mosque Complex in Lanham, Maryland.

During his speech at the venue, the prime minister warned attendees about the Fetullah Terrorist Organization (FETO), which staged the coup attempt last year.

Emphasizing that there is no difference between Daesh and FETO, the prime minister added that both groups flout the sacred values of Islam, threatening peace in Muslim countries across the world.

The PM denounced FETO leader Fetullah Gulen, who is still living in the US, stating that he has corrupted and fooled many Muslims by presenting himself as a so-called “moderate Muslim.”

“The leader of the Fetullah Terrorist Organization is no cleric, he is a bloody terrorist.”

In regards to the failed coup attempt, which Fetullah Gulen took lead in orchestrating, the prime minister said that “FETO’s main goal was to infiltrate the Turkish state and put it under his [Gulen’s] control.”

He warned Muslims living in the US to “stay away from schools and cultural centers affiliated with FETO.”

While the Gulenist criminal cult will maintain its position on the prime minister’s agenda, as Turkey will renew its request for the extradition of the organization’s leader, Binali Yildirim also informed attendees of the fight Turkey is giving back home.

Since the July 15 coup attempt, the Turkish government has continued to “decipher the secret structures of this bloody terrorist organization within the bounds of law,” the prime minister said.

He stressed that the members of this organization “should pay the price for every single act of evil they did to Turkey.”

“Citizens in our country know about the misinformation games played by FETO terrorists. I also know that our citizens living abroad aren’t fooled by these games either,” he added.

US support fight against PKK

While the prime minister has terrorism on his agenda, Secretary of State Jim Mattis met with his Turkish counterpart, Nurettin Canikli at the NATO meeting of defense ministers in Brussels.

Pentagon chief spokesperson Dana W. White said in a statement that the two ministers met in order to “reaffirm the longstanding defense relationship between the United States and its NATO ally, Turkey.”

Recalling a previous meeting between the two ministers on August 23 in Ankara, White stated that “the secretary thanked the minister for Turkey’s continued, critical contributions to global security and the fight to defeat ISIS [Daesh].”

White also added that “Secretary Mattis acknowledged the threats posed to Turkey, and reiterated that the US will continue to stand with Turkey in its fight against the PKK and all terrorist therats.”

Mattis and Canikli also agreed to continue with their full range bilateral defense activities and consultations, and agreed to look for further ways to strengthen defense cooperation.