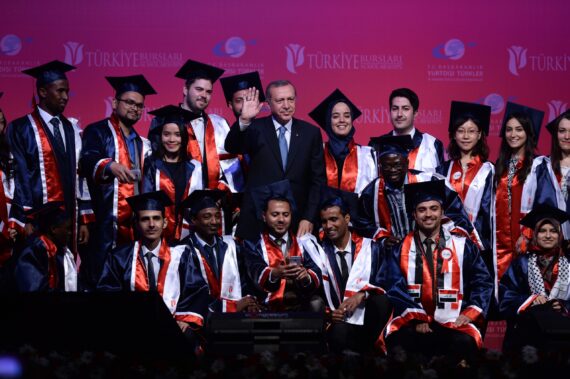 Among many other projects conducted for international students, Türkiye Scholarships, run by the Presidency for Turks Abroad and Related Communities (YTB), has a significant function. Türkiye Scholarships, which came into effect as a more comprehensive version of the government’s scholarship program in terms of scope and geography after being revised with the foundation of YTB, was introduced in 2012 as a foreign policy instrument and a dynamic supporter of the works conducted in this field in line with government programs.

While scholarship opportunities in Turkey for higher education were hardly heard about before 2012, today, a whole slew of promising young people from Latin America, the Far East and disadvantaged regions of Africa choose Turkey in order to pursue their studies. This is all thanks to Türkiye Scholarships.

The most striking example of this can be given from Africa. In the “2017 Report on the International Mobility of African Students” published by Campus France, a French national agency for the promotion of higher education, Turkey ranked 34th in 2010 among the countries chosen by African students. In 2015, Turkey ranked 13th as the number of African students choosing Turkey for their studies increased nine times within these five years. Turkey’s comprehensive scholarship program is the leading factor that has caused such an increase.

While almost unheard before 2012, today, a whole slew of promising young people from Latin America, the Far East and Africa choose Turkey to pursue their studies. This is all thanks to Türkiye Scholarships.

Consequently, Türkiye Scholarships largely contributes to the internationalization of university education in Turkey and will obviously become of Turkey’s most influential soft power instruments in the long term. The success of individuals who benefited from this program when they return to their home countries will strengthen Turkey’s international lobbying power in the long-run.

Along with countries that have remained the prominent choices of international students, including the UK and U.S., some new actors who have been able to employ an effective scholarship scheme have also emerged. Over the past three years, China has provided scholarships to over 30,000 African students and declared that it intends to increase this number to 50,000 in the upcoming years. Beijing also announced that it will provide short-term training for 50,000 Africans. While the scope and opportunities presented by scholarships vary, it is safe to say that Türkiye Scholarships offers various appealing opportunities to international students.

With the implementation of the Türkiye Scholarships program, monthly grants and facilities such as housing, health, and transportation provided to students have been improved. In addition, students are provided with academic, social, cultural, and professional guidance services, which help them to spend their study years more productively.

The enhancement of the scholarship program has contributed to the appeal of Turkish universities to a large audience in many regions. Parallel to this, Turkey’s share in the international market is one of the primary goals.

At this point, Türkiye Scholarships executed an effective publicity strategy as an international scholarship program that supports the new Turkey vision and foreign policy initiatives. As part of this effective strategy, various international education fairs have been attended, and publicity activities presenting information on schools and universities are organized in the targeted countries. Thanks to the application system that is available in eight languages, an open application possibility, which is accessible almost everywhere in the world has been presented. Thanks to that, alongside the Balkan and Central Asian countries, from which Turkey always draws a large number of international students, applications from the Middle East, Africa and Far East have also soared.

As the importance of qualified students in terms of increasing the recognition level of scholarship programs is considered, it can be seen that Türkiye Scholarships are preferred mostly by the students ranking in the top levels in their countries. Another important aspect is the professionals who work in important positions in public or private sectors in their countries and prospective academics employed in universities also prefer Turkey and Türkiye Scholarships for graduate education. Parallel to this, the ratio of international students graduating with high achievements in due course of their study periods is increasing each year.

Throughout 2018, the majority of applications were received from the Middle East, North Africa, Central Asia, and Sub-Saharan Africa, followed by Far and South Asia, the Balkans, and European countries.

From the locations of applications, it can also be inferred that Türkiye Scholarships addresses a broad geography. Throughout 2018, the majority of applications were received from the Middle East, North Africa, Central Asia, and Sub-Saharan Africa, followed by Far and South Asia, the Balkans, and European countries. By this, it can be stated that Türkiye Scholarships appeals to students from almost all parts of the world. Students coming from less-developed countries are hosted in various cities of Turkey as potential envoys that will enable interaction between Turkey and their countries in cultural, political, and economic terms.

We are currently witnessing serious competition in the field related to hosting international students. Many countries engage in multi-sector cooperation and manage this realm as a strategic field in which public diplomacy, politics, and economy intertwine. In this sense, Turkey is required to manage and improve its international student policy and scholarship programs more dynamically. It is of critical importance to support the country’s policies o international students, which will render Turkey capable to compete with others across the world. A strategy that will effectively coordinate the cooperation between civil society, the public and private sectors will ramp up Turkey’s competitive power. As is the case in most fields in today’s rapidly changing world, ensuring dynamism and introducing novelties by targeting quality will guarantee more achievements in this field as well.

Murat Kazanci graduated from the Middle East Technical University Department of History in 2005 and completed his MA at the University of Exeter in 2013. Kazanci worked at the Minister of Culture and Tourism until 2010. Since then he has been working at the Presidency for Turks Abroad and Related Communities.