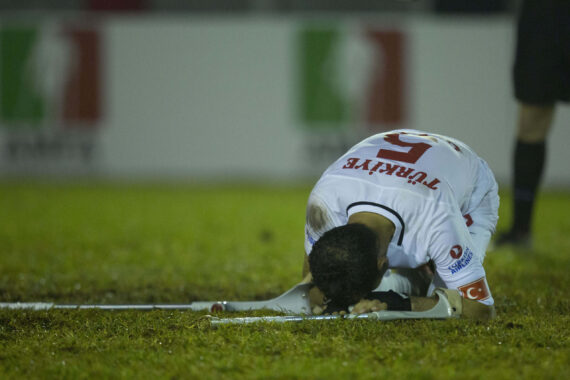 Osman Cakmak of Turkey is seen after the final match of the Amputee Football World Cup between Angola and Turkey in San Juan de los Lagos, Mexico on November 04, 2018. Anadolu Agency

Italy presented a whole slew of talented football players to world football during the 1990s. Undoubtedly, one of the leading names among them was Roberto Baggio. The 1990s were the prime years of Baggio. He played in Italy’s most prestigious clubs, including Inter, Milan, and Juventus. His career might have been called impeccable had Brazil not won the World Cup final played in America.

Of course, Baggio was not the only one accountable for Italy’s defeat in the final game, but the story of defeat certainly centers on him. He was so close to making his mark on the final game of a tournament that was very promising for him. During the penalties, only one penalty goal was needed for his team to win the world championship, and Baggio was the one poised for the penalty kick.

Every Italian would vouch for him were you to ask who should take the critical kick, as he deserved this due to his quality and performance. When he missed the penalty, Italy lost the world cup. This turned out to be such a tragic moment for football lovers and the missed penalty haunted Baggio’s career.

Just like Baggio, Osman Cakmak missed a penalty in a world cup final, which this time cost Turkey the Amputee Football World Cup. Although this upset Turkish fans, when Cakmak’s biography is written, the missed penalty and the championship will not shadow his life, but will only be reminisced as an anecdote. While all of Italy were devastated after Baggio missed the penalty, Turks were upset not over the missed up, but over the fact that Cakmak had to write off a specific day of the year.

Hosted by Mexico, the Turkish Amputee National Football Team presented a spectacular performance in the tournament and made their way to the final game. After a fair and hard play, Angola eventually took the cup after the penalties, and the Turkish team came runners up in the tournament. After being crowned champions in Europe, and after their performance in Mexico, the Turkish team were welcomed in their homeland with the glory they deserved.

Although the Turkish National Team did not necessarily receive the attention they deserved from the public, they worked very hard to represent the nation in the best way by wearing the uniforms carrying the motifs of our national flag. And they did not show any sign of resentment while doing so.

Nothing seems extraordinary up until this point. Until then, the only thing the team asked for was support during the game hours. Although this was a little difficult due to the time difference between Mexico and Turkey, the players and the results of the game would be on the news the next day.

At the end of the game, each player expressed their sorrow for losing the cup. Their ambition for the cup and their disappointment could be read in their eyes. But this is what football is all about. One cannot always win. The microphone was eventually given to the team captain Cakmak, who glued millions of Turkish sports lovers to their seats when he said that they wanted to play the European Championship final at Vodafone Park. Cakmak said that he lost his leg when he stepped on a mine on November 5 several years ago, and missed the world cup as he missed the penalty kick again on November 5. He then asked for the forgiveness and blessings from his friends and from the Turkish nation.

The high-minded and noble man, who lost his leg while fighting against terrorism, asked for the nation’s forgiveness due to the penalty he missed. The Turkish nation did give their blessings to him, but asked for forgiveness from Cakmak and many others like him, who have sacrificed their lives in order to protect their nation.

What could have been on Cakmak’s mind while he was kicking the penalty?

It must be admitted that the presence of these silent heroes was first discerned during the European Amputee Football Championship, which was held in Turkey for the first time. The team enjoyed growing support until the very end of the championship. After the semi-final, the final game was played at Vodafone Park upon the call of the team members, and we witnessed an unprecedented case in the final game. Around 40,000 people watched Turkey play against England. In this atmosphere, a goal scored by Cakmak earned Turkey the European Championship. The golden goal that won the championship was also Cakmak’s first goal for the national team.

Mustafa Taki Kurtoğlu is currently pursuing his MA in Sociology, with a particular focus on sport sociology, at Beykent University. Kurtoğlu is also the current Education Coordinator at SETA Istanbul.