The new Ukrainian president will have to go through the historical relations between Turkey and Ukraine, which over the past four years have seriously progressed in the political, economic, military, diplomatic and cultural spheres, are very valuable for each of the two countries. 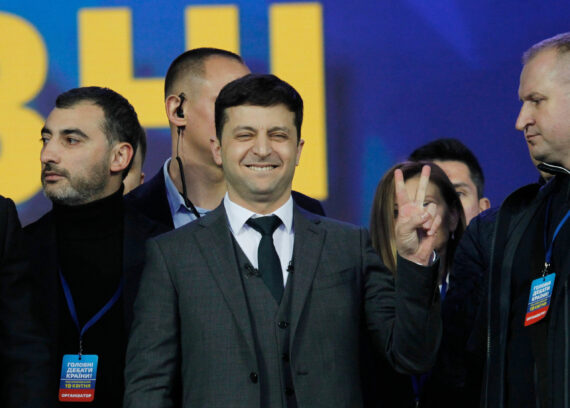 This Sunday Ukrainians overwhelmingly voted for their new president Volodymyr Zelensky – a popular actor and comedian who has no political experience – ushering in a new era of politics in the struggling country. Zelensky is best known for his TV series “Servant of the People,” in which he plays a simple schoolteacher, whose video against corruption goes viral online and he unexpectedly gets elected for the presidency.

The former entertainer ran under a political party with the same name as his show. The main reason behind the victory was Zelensky’s informal style and vow to change the roots of the post-Soviet politics which frustrated citizens of the country. According to polls, a huge number of voters stated that they want radical changes in the country.

No one knows what his presidency will look like and to make any predictions about what kind of president Zelensky will be extremely difficult and premature. He offered little information about his policies and future plans during his presidential campaign, avoided serious interviews and discussions, preferring instead to create an image of the “Servant” of “the People.”

No one knows what Zelensky’s presidency will look like and making predictions about what kind of president he will be is extremely difficult.

This blurred the line between real Zelensky and his on-screen persona grabbed the attention of millions of voters. However, the reality in which Zelenksy has taken over the leadership of a country on the frontline of the West’s stalemate with Russia following Moscow’s annexation of Crimea and support for pro-Russian forces in eastern Ukraine, is of interest here. The pertinent question now is if he can govern the country which is at hybrid war with his limited knowledge of politics, economics, and international affairs.

The United States, Europe and Russia will be closely watching Zelensky’s foreign policy pronouncements to see how he will manage the country and use new foreign relationships to create “radical changes.” The ongoing war in Ukraine’s eastern provinces and the annexation of the Crimea has had a tremendous impact on the country and on its role in the international system. Therefore, one of the colossal challenges will be continuing the war against Russia-backed separatist forces in Donbass, the struggling economy and maintaining geo-strategic stability in the region.

The U.S., Europe and Russia will be closely watching Zelensky’s foreign policy pronouncements to see how he will manage the country.

Geopolitical stability in the Black Sea

The Black Sea region has emerged as a major potential venue and the playing field of multiple actors and forces, as the region suddenly transformed into a potential major trading hub between Central Asia and Azerbaijan on the one hand and Europe on the other. Therefore, there is a high chance that Turkey will be among the top priorities for Zelensky to further develop high-level strategic relations with Ukraine due to its shared geo-strategic values within the military, energy and economic sphere.

There is indeed no secret about Turkey and Ukraine welcoming each other as good supporters. These two countries have always held invigorate relations since Ukraine’s emergence as an independent country following the collapse of the Soviet Union in 1991. Turkish-Ukrainian ties go back decades and have since diversified but they are likely to be developed further under the influence of the new Ukrainian president and the circumstances created by Russia’s strategy toward Ukraine.

Ankara and Kiev began the discovery of the potential within their bilateral relations when Kiev attempted to strengthen the Armed Forces of Ukraine against the Russian military. These goals in the field of defense and security, the two nations will prove invaluable partners.

There is a high chance that Turkey will be among the top priorities for Zelensky to further develop high-level strategic relations with Ukraine.

Turkey exports industrial products, cleaning products, textiles and food to Ukraine, and imports coal, iron-steel, and chemical products. In 2018, trade between the two countries increased by 20% and approached four billion dollars, but the expected figures are much higher.

The developments in Ukraine and the separation of the Crimean peninsula from Ukraine, followed by its annexation, the construction of a bridge across the Kerch Strait that provides a direct terrestrial link to Russia highlight again the geopolitical importance of the Black Sea and Turkey’s role in controlling the Bosporus and Dardanelles straits. This new geopolitical environment in the Black Sea region pushes Ankara to take an active part in the settlement of international conflicts taking place in neighboring countries.

It seems highly likely that enhanced NATO-Ukrainian relations, in place since mid-1997, have provided a new appreciation in Kyiv that cooperation with Turkey, the only NATO ally in the Black Sea basin, can only be a real contribution to Ukraine. This has provided an opportunity for Ankara in playing a mediation role to ease ongoing tensions between Russia and Ukraine, fearing a full-scale war in the Black Sea that would jeopardize its own interests in the region. As a key NATO power in the region and a Black Sea coastal state, Turkey fears that this new crisis between the two countries could intensify into a military conflict.

The common interests of Ukraine and Turkey are expressed in an emphasis on territorial integrity and national security interest to counterbalance Russia in the Black Sea region. Russia’s latest provocative actions regarding the Sea of Azov was another push for cooperation and further military, political and economic development. Therefore, clearly, Crimea is potentially the most critical topic in Ukrainian-Turkish relations, because of the special ties between Turks and Crimean Tatars. During the crisis between Russia and Ukraine in 2014, Turkey adopted a safe approach to the ongoing conflict. For Turkey, the annexation of Crimea was unacceptable, but Ankara attempted to remain neutral. Turkey has successfully extended a helping hand to Ukraine without antagonizing Russia and has refrained from criticizing Moscow.

One such example was the release of convicted members of the Mejlis of the Crimean Tatar people from Russian prisons. Akhtem Chiyhoz and Ilmi Umerov, who are Ukraine citizens, were freed with the mediation of President Recep Tayyip Erdogan. On October 2017, the convicts were taken first to Turkey and then to Ukraine. In September 2017, Ilmi Umerov and Ahtam Chiygoz were sentenced to 8 years by the Crimean court for “organizing mass riots in Simferopol.” They opposed Russia’s annexation of the Crimean peninsula and waged a political struggle for the return of Crimea to Ukraine in February 2014. Erdogan met several times with Russian President Vladimir Putin in order to free the leaders of the Crimean Tatars from the Russian prison. This event was not widely covered in the Turkish media, but Ukrainian politicians highly appreciated Erdogan’s diplomatic efforts.

Turkey, which holds immeasurable political and trade relations with both Moscow and Kiev, seems to be holding positive hand to offer mediation.

Turkey controlling Turkish Straits became the holder of balance in the crisis, in which Russia wouldn’t feel attacked. Once more, the basic motive behind this mutual attraction is geopolitical: the wish to reinforce the post-Soviet order in the Black Sea through bilateral and regional cooperation.

For a long time guarantors of the Minsk Agreements- Germany, France, and Ukraine- have failed to pressure Russia to withdraw weaponry, unofficially linked to the country, from Donetsk and Lugansk. Moscow opposes any U.S. initiatives aimed at de-escalation of the armed conflict. Russia continues the sophisticated “hybrid war” in the East of Ukraine to counter Western pressure.

Both Russia and Ukraine are in need of the mediation role that Turkey can play as Turkey is offering to ease the situation between these nations. Turkey, which holds immeasurable political and trade relations with both Moscow and Kiev, seems to be holding positive hand to offer mediation in this complicated situation.

The new Ukrainian president will have to go through the historical relations between Turkey and Ukraine, which over the past four years have seriously progressed in the political, economic, military, diplomatic and cultural spheres, are very valuable for each of the two countries. Zelensky will have to take into consideration how the cooperation of the two important Black Sea powers is an important strategic partnership that needs to be further maintained and developed.