According to a UN report, there are over two million Ukrainian refugees and Poland has accepted until March 8, 2022 over 1.2 million of them. 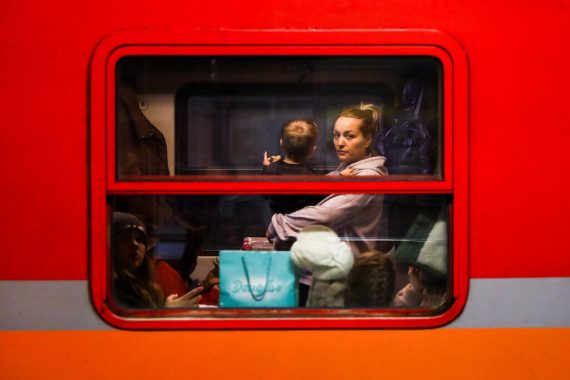 Refugees from Ukraine who arrived to Krakow due to ongoing Russian attacks on Ukraine are seen inside a humanitarian train which departures to Berlin from the main railway station in Krakow, Poland on March 13, 2022. Photo by Beata Zawrzel. Anadolu Images.

Hundreds of thousands of Ukrainian refugees are fleeing from their home country due to the Russian invasion. Many are still trying to leave Ukraine, filling the routes out with cars stretching for miles. But those who could cross the borders require help.

The Russian invasion of Ukraine began on February 24 and is ongoing, forcing more people to leave to the neighboring countries. The war has so far has cost tens of thousands of lives and can leave a war-torn Ukraine behind.

Valeria’s journey to becoming a refugee

Valeria, 21, a student who crossed the borders of Poland from Ukraine, is mourning the fact that she won’t return to her normal life in Ukraine. She never thought about leaving her country, even her village, when the war started. She told Politics Today, “We thought that it would be safer in villages; but it wasn’t.” Her father drove her to Kyiv, the capital, where she got on an evacuation train to Lviv on her way to Poland.

She added that “it was horrible. Too many people were on the train, there was no place. We stayed on the train for 12 hours, and sometimes we got a chance to sit on suitcases or the floor.” After she arrived in Lviv, she stayed there for a few days. Her friend drove her to the border, which she crossed on foot. Later, a volunteer took her and drove her to Warsaw. She notes that “it was quite amazing how people in other countries volunteered and helped us get to places, have food or somewhere to stay.”

EU countries opened their doors to Ukrainian refugees from the first day. However, many host states are ill-prepared for this scale of mass displacement. In many countries, locals have opened their houses while many NGOs and governmental agencies are trying to protect and assist the refugees by providing for their basic needs.

Filippo Grandi, the United Nations high commissioner of refugees, recently identified the refugee crisis in Ukraine as “the fastest-growing refugee crisis in Europe since World War Two.” The UN reported that there are over two million refugees according to data published on March 8, 2022. Many of the refugees landed in Poland, which shares a border of 428 km with Ukraine. According to a UN report, the government of Poland has accepted over 1.2 million refugees, and the Poles have shown a warm reception to their neighbors.

Over the past few weeks, many other countries have also accepted a significant number of refugees. Moldova, a country with a population of four million, has taken 82,000 refugees. The country bears a great importance in terms of its long border with Ukraine, which stretches for 939 km, the longest after Ukraine’s border with Russia.

Hungary is another country where many Ukrainians have fled. Almost 203,000 refugees have crossed the 103 km long border between Ukraine and Hungary, the UNHCR has said.

In the south, Ukrainians cross the borders of Romania in order to access humanitarian assistance. According to UN data, by March 8, nearly 150,000 Ukrainian refugees arrived in Romania, which is regarded as a gate to Europe. Just like in Poland, Romanians quickly organized help for their neighbors. Using social media, people who wanted to help refugees mobilized and aided with their basic needs.

Nearly 100,000 Ukrainians have fled to Russia as well, according to the UNHCR. Other European countries have accepted a total of 235,000 Ukrainian refugees since the beginning of the conflict.

Ukraine’s neighbor in the Black Sea, Turkey, is one of the countries that is watching the conflict with alarm. According to Turkey’s Minister of Interior Süleyman Soylu over 20,000 Ukrainians arrived in Turkey by March 6.

At the same time, many people had to leave their homes to flee to safer cities within Ukraine. The UNHCR has reported that over one million people have been internally displaced in Ukraine. Lviv, a city located in the northwest of Ukraine, is a destination people are trying to reach. The city had a population of 720,000 people before the war. Tens of thousands of people flooded the city, especially those who escaped the Ukrainian capital, Kyiv. The city is a passage point for those who want to cross to Poland, Slovakia, and Hungary.

Apart from the Ukrainian refugees who have managed to flee, many are still trying to cross the borders to European countries. Most of them are women and children since men aged between 16 and 60 have been banned from leaving the country by the Ukrainian authorities.

Also Read
The Hedgehog’s Dilemma: Turkey’s Position between the West and Russia After the Invasion of Ukraine