On Monday Russia proposed imposing a ceasefire in Eastern Ghouta on the outskirts of Damascus – one of the de-escalation zones- for Tuesday and Wednesday. 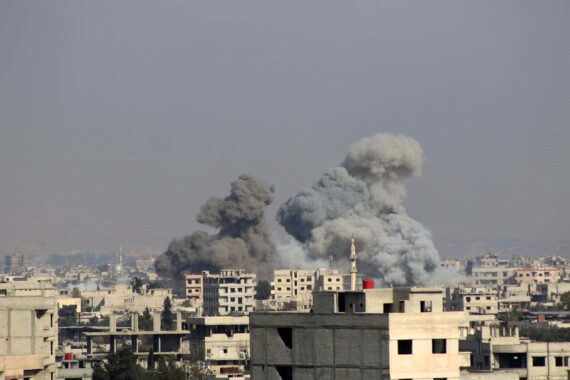 On Monday Russia proposed imposing a ceasefire in Eastern Ghouta on the outskirts of Damascus – one of the de-escalation zones- for Tuesday and Wednesday.

The Bashar al-Assad regime agreed to the cease-fire, a senior UN envoy said on Tuesday.

“The Russians have proposed and the government has accepted a cease-fire in Eastern Ghouta,” he said.

“Now we need to see whether this takes place but it is not coincidental that this was actually proposed and agreed upon just the day of the beginning of this [talks] session,” the diplomat added.

At least 147 have been killed by air strikes and shelling since the Syrian army, with Russian air power, began the offensive to take the besieged rebel-held Eastern Ghouta nearly two weeks ago, Syrian Observatory for Human Rights – a war monitoring body – said.

These latest Syria peace talks involve a united opposition delegation; an Assad regime team is expected to join the discussions on Wednesday.

Syria’s opposition also called for direct negotiations in Geneva with representatives of the Assad regime.

The Geneva negotiations were first held on 30 June 2012. Geneva 2 started on January 22, 2014, but failed. The negotiations, which began on January 29, 2016 for the third time, ended when the Assad regime besieged Aleppo.

According to UN sources, the first stage of the 8th round of negotiations is expected to end Friday, December 1st and reunite in the middle of December.

The enclave is under siege by Assad forces since 2012, but it has become far worse in recent months since routes used to smuggle in food were shut.

The UN World Food Programme said in a report last week that residents are so short of food that they are eating trash, fainting from hunger and forcing their children to eat on alternate days.