Undemocratic But Democratic: How the Global Hegemony Is Maintained through Coups

Speaking to New York Times, a senior officer who has worked in the Venezuelan military confessed that they negotiated with the Trump administration on a plan to stage a coup and overthrow Maduro. 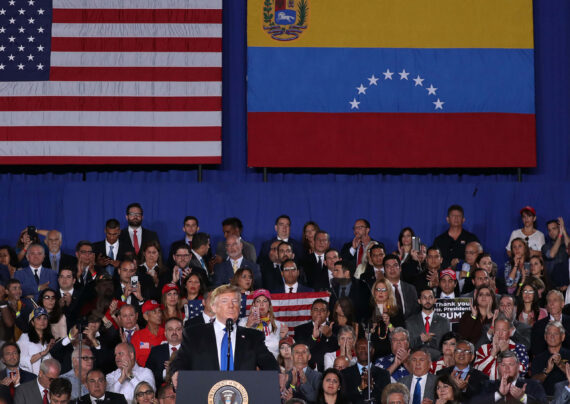 Last week, U.S. First Lady Melania Trump, who is a Slovene-born American former fashion model, took the stage in a rally held in Florida International University to introduce her husband, the U.S. President Donald Trump. She said: “Many of you in the room know what it feels like to be blessed with freedom after living under the oppression of socialism and communism. In Venezuela, the people are on the brink of reclaiming their own liberty. There is hope, we are free, and we pray together loudly and proudly that soon the people of Venezuela will be free as well.  My husband is here today because he cares deeply about the current suffering in Venezuela.”

During the event in Florida, which has a high population of Venezuelan-Americans, the U.S. President took stage after his wife’s introduction. He told the Venezuelan military to support Juan Guaidó assigned by Trump himself and unseat the elected president Nicolás Maduro. A few days later, his daughter Ivanka Trump tweeted: “The US stands with the brave people of Venezuela as they seek freedom from tyranny & the restitution of democracy. God bless you.”

U.S. President Trump has been striving to overthrow Maduro since last year. Speaking to New York Times, a senior officer who has worked in the Venezuelan military confessed that they negotiated with the Trump administration on a plan to stage a coup and overthrow Maduro. However, it was emphasized that the military officer who negotiated to overthrow Maduro could not dare supporting the attempt since he was on the “sanction” list of the U.S. This year, Trump clearly articulated that they have several options for Venezuela, including the military option.

Speaking to New York Times, a senior officer who has worked in the Venezuelan military confessed that they negotiated with the Trump administration on a plan to stage a coup and overthrow Maduro.

Three options are currently on the table regarding Venezuela, which has two presidents along with the one assigned by the U.S. on January 25, two parliaments, and also the richest oil reserves of the world. The options include a military coup, a war, or a U.S. intervention. But all these developments are represented as plausible. For instance, the French Le Monde approaches the issue with this question: “Why does the Trump administration persist on Maduro’s leave while it avoids creating problems and tolerates the Saudi Arabian and Russian regimes?” Let alone any criticisms or condemnations towards the U.S., eight European countries have recognized Guaidó as the President of Venezuela, including the French President Emmanuel Macron.

Of course, using coups as a manipulative tool in foreign politics is not the Trump administration’s invention. And why wouldn’t Trump use this card since the U.S. has always been resorting to this method? The only difference in the latest situation is; the old way of employing this method was more sophisticated and subtle. After 30 or 40 years, the facts were either leaked or directly announced by the CIA. For instance, in a speech he made in Egypt in 2009, Barack Obama, the first black president of the U.S., admitted the U.S. role in the coup staged against Mohammad Mosaddegh.

After four years, in 2013, the CIA officially announced its active role in the coup by presenting details. What happened in Iran in 1953? Appointed as the Prime Minister of Iran by the Shah Mohammad Reza Pahlavi in 1951, Mosaddegh was overthrown in a coup orchestrated by the CIA and MI6 upon the nationalization of the Anglo-Iranian Oil Company’s (later British Petroleum and BP) operations in Iran. After the military coup, General Fazlollah Zahedi succeeded Mosaddegh as the CIA’s choice.

Today, the U.S. wants to see Guaidó instead of Maduro in the presidential seat. It is that simple! Under the Eisenhower administration, the CIA did not overthrow Mosaddegh in Iran only with a single move. As they admitted, they bribed the media, organized left-wing mass demonstrations and instilled fear in religious circles of Iran that Mosaddegh would bring an atheist and socialist regime. Chaos was fomented in society, and every corner of society was provoked, just as they did to Salvador Allende in Chile, the country with one of the longest standing democracy experience in Latin America.

Using coups as a manipulative tool in foreign politics is not the Trump administration’s invention. The only difference between past and present is that the old way was more sophisticated and subtle.

The comprehensive nationalization policies marked by Allende especially in the copper mines as part of a socialist and pro-independence approach incensed the U.S. Then U.S. Secretary of State Henry Kissinger said the following after Allende’s election: “The issues are much too important for the Chilean voters to be left to decide for themselves. I don’t see why we need to stand by and watch a country go communist because of the irresponsibility of its own people.” Soon after, the CIA intervened upon the order of then U.S. President Richard Nixon. According to the CIA’s confessions that came years later, they organized a nationwide truck strike through the Confederation of Truck Owners by paying 10 million dollars and stopping the activities of 70 thousand trucks. The transport of goods within the country was hampered this way, so the threat of hunger formed the backbone of the coup.

Winning the 1970 election and reelected in 1973 despite all the plots against his government, Allende was found dead in the presidential residence during the military coup staged the same year. He was succeeded by dictator Pinochet, who tyrannized the country for 17 years.

Four years after Obama admitted the U.S. responsibility in the Mosaddegh coup, a U.S.-backed coup was staged in Egypt. The ruling Freedom and Justice Party and President Mohamed Morsi, being the first democratically elected party and president in the first free elections in the country’s history, were overthrown by a military coup. Obama was the U.S. President at the time and upon a question on the issue, a White House spokesperson said that stating whether there is a coup or not in Egypt does not serve U.S. interests. Also, then U.S. Secretary of State John Kerry called the coup as the restoration of democracy since U.S. laws prohibit providing economic aid to coup regimes. So, they needed support for their suitable nominee General Abdel Fattah al-Sisi after the overthrow of Morsi. Following arbitrary imprisonment of innumerable people, nine young people were executed on Sisi’s order while 50 others still wait to be executed. Of course, neither the U.S. nor Europe raised their voices against all these inhumane practices since jungle laws apply on our planet.

Last week, it was the 22nd anniversary of the “postmodern coup” staged in Turkey on 28 February 1997, which was the continuation of the three military coups in the Republican history. As the coup could not be effective for a thousand years unlike they presumed, they attempted to stage another coup on 15 July, 2016. There is a saying in Turkish that can be translated as: “Dog orders another dog and it orders its tail.” The tail got stuck on July 15 and hopefully will be so from now on.

Also Read
US failed to stick up for Democracy in the Night of July 15 Coup Attempt
We use cookies to optimize your online user experience. To learn about our use of cookies and how you can manage your cookie settings, please see our Privacy Policy. By continuing to use our site you are excepting our use of cookies.Accept Cookies & CloseMore Info