During the Presidential Summit held in Sochi on November 22, 2017, Turkish President Recep Tayyip Erdogan underlined two conditions for the success of the initiative: a clear and strong link with the UN-mediated Geneva process, and the participation of the genuine members of the opposition with a clear rejection of anyone affiliated with terrorist organizations, including PYD/YPG. 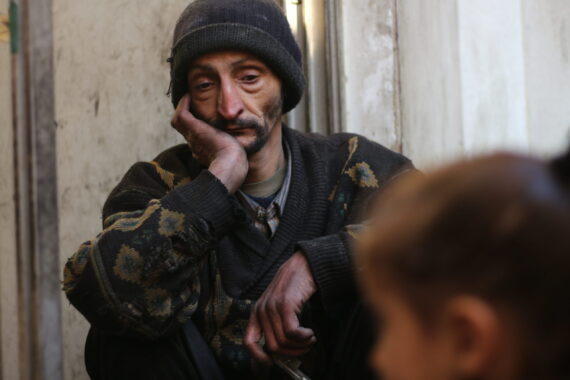 Syrian Abu Qasim, who lost his job due to health issues following the Assad regime’s blockage on Eastern Ghouta, sits on the floor as he looks after his daughter in E. Ghouta, Syria, January 9 2018. Anadolu Agency

In an opinion written for Newsweek, Turkey’s Foreign Minister Mevlut Cavusoglu described the situation in Syria not only as the “worst humanitarian crisis since World War II” but as a conflict that “encouraged the emergence of a global terrorist threat.”

Sharing a 566-mile-long border with Syria, Turkey has inevitably been the country most affected from the Syrian Civil War. Maintaining an open-door policy to those who have fled the atrocities in Syria, Turkey has become the largest refugee hosting country in the world. According to figures published by the Syria Regional Refugee Response, there are 3,424,237 registered Syrian refugees in Turkey. Bearing in mind that not all refugees are registered, this figure is estimated to be a lot higher.

The Syrian Civil War has also brought to the frontline Turkey’s humanitarian assistance. As the Foreign Minister comments in his op-ed, Turkey has spent over $30 billion to meet the needs of 3.4 million Syrian refugees seeking assistance in their northern neighbor. Opportunities such as free access to medical care, education, the right to join the labor force have been designed and given in order to help Syrian refugees “better integrate into their host society.”

It’s not enough to highlight how Turkey has approached the conflict in Syria from a humanitarian perspective. While Ankara has opened its doors for refugees – not only for victims in Syria but from all over the Middle East – the Turkish administration is responsible for maintaining and preserving its national security.

Highlighting the fact that “the terrorist threat targeting Turkey from Syria is not over,” the FM also emphasizes that the “solidarity and cooperation of the United States” is far from satisfactory. This is due to the fact that not only has the U.S. administration failed to support Turkey in its fight against terrorism, but the Trump administration continue to supply arms to the PKK affiliated YPG terrorist organization in Syria.

“The PKK affiliate’s presence lingers in northern Syria and to our dismay it is empowered by US-led efforts aimed at countering ISIS.”

Not only is the PYD/YPG well-known for its poor human rights record, which is reflected in reports published by independent international human rights organizations, including Amnesty International and Human Rights Watch, but the terrorist organization poses a major threat to the national security of Turkey. Ankara has repeatedly called for the U.S. administration to stop the facilitation of arms and weaponry and to recognize the legitimate actors in the political solution. Cavusoglu’s remark for this form of state-funded terrorism is highlighted as he states “the fight against terrorism cannot be won by siding with one terrorist organization against another.”

“The US must step back from this grave mistake and not allow itself to be blackmailed by the terrorist outfit.”

Following the failure to generate a solution to the conflict during the Geneva process, through the Astana talks, in which Turkey, Russia and Iran act as the guarantor states, “the violence in Syria has been reduced and the ceasefire regime was reinforced through a de-escalation scheme.”

While the Astana talks produced some result, the Turkish FM indicates that “the Geneva process needs to be resuscitated.” Claiming that “paying lip service to its primacy as the essential platform in the political process takes us nowhere,” Cavusoglu also touched upon the Congress of National Dialogue to be held in Sochi, which he states “could serve as a complementary exercise in this regard.”

During the Presidential Summit held in Sochi on November 22, 2017, Turkish President Recep Tayyip Erdogan underlined two conditions for the success of the initiative: a clear and strong link with the UN-mediated Geneva process, and the participation of the genuine members of the opposition with a clear rejection of anyone affiliated with terrorist organizations, including PYD/YPG.

As Cavusoglu states, if these two conditions are met then the Sochi Congress could complement the Geneva process and “create a functional synergy.” In order for such an initiative to be successful, all actors ought to be reminded of their responsibilities – including the U.S. Therefore, the end to the Syrian Civil War “commands near universal consensus,” and “the time to make it happen is right now.”