US army plan against territorial integrity in Syria 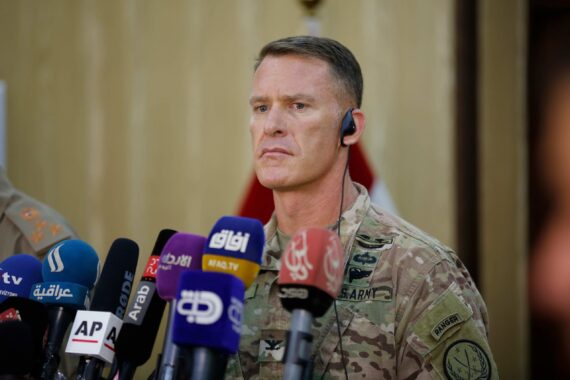 The SDF is a U.S.-backed group that is largely controlled and funded by the PKK/PYD terrorist organization in Syria.

In a written statement, Dillon stated that “The coalition is working jointly with the SDF to establish and train the new Syrian Border Security Force (BSF).”

He added that “Currently, there are approximately 230 individuals training in the BSF’s inaugural class, with the goal of a final force size of approximately 30,000.”

Earlier this week it was revealed that the PKK/PYD was forming a so-called army with U.S. support.

Some 400 “border guards” trained by the U.S. through the Pentagon and the CIA formed “The North Army.”

These trained terrorists were also provided with both theoretical, technical and military training and assistance and high-technology equipment.

Attempting to justify the situation, Dilal stated that efforts were taken in order to ensure that individuals served in areas close to their homes. “Therefore, the ethnic composition of the force will be relative to the areas in which they serve.”

Informing that the recruitment process had begun, Dilon also highlighted that half of the recruits of the new force will be SDF veterans.

The SDF – a group pioneered by the PKK/PYD – is inevitably one of the biggest national security threats to Turkey.

Regardless of the fact that the U.S. recognizes the PKK as a terrorist organization, and amid the attacks that the group has conducted in Turkey, the Trump administration continues to support the Syrian offshoot of the group, the PYD and the SDF.

In a written statement, Kalin also added that the steps taken by the U.S. aimed to provide a permanent place for the terrorist group in the region.

Highlighting that the situation is “totally unacceptable,” Kalin re-iterated the fact that Turkey has the right to fight all terror groups in any manner, time and place it deemed fit, and would continue to take necessary measures to ensure its security in line with national interests.

Following the first response from Kalin, the Foreign Ministry also issued a statement reminding that Turkey had re-iterated on numerous occasions that it was “wrong and objectionable” to operate with the PKK/PYD terrorist organization on the ground in Syria in order to fight against Daesh.

The statement also added that the establishment of the so-called Syria Border Protection Force was not consulted with Turkey – which is also a member of the coalition.

Highlighting the mystery behind the decision, as it is unknown which coalition members approved the decision, the Foreign Ministry also stated that “To attribute such a unilateral step to the whole coalition is an extremely wrong move that could harm the fight against Daesh.”

“Such initiatives, through cooperation with the PYD/YPG in contradiction with the U.S. commitments and statements, endanger Turkey’s national security and the territorial integrity of Syria, and are totally unacceptable.”

Turkey is not the only country to have condemned and spoken out against the decision of the U.S. Party to the Astana talks, the Russian administration also slammed the U.S. plan to form an army led by the PKK/PKK, warning that it could jeopardize Syria’s territorial integrity.

Speaking at his annual news conference in Moscow, Russian Foreign Minister Sergey Lavrov pointed to the possible problems that could occur between Turkey and the Kurdish population as a result of the U.S. plan.

“The U.S.’ unilateral, ultimatum-like project, aimed at establishing an army in Syria, may create problems in relations between Turkey and the Kurds.”

Lavrov also stated that this move by the U.S. would lead to the formation of a large isolated area on Syria’s border with Turkey and Iraq.

“This serious issue is leading to worrisome results regarding the steps to be taken for these areas in Syria.”

Similar to Turkey, Russia’s Foreign Minister underlined that Moscow expects an explanation from the U.S. administration as this move will not “serve to calm the situation” in Syria’s Afrin district, which borders Turkey.

“Like our Turkish and Iranian colleagues, we also expect an explanation from the U.S. on this issue. We think this decision will jeopardize Syria’s territorial integrity.”