US continues support to PKK/YPG in Manbij

According to news reported from Anadolu Agency on Wednesday 10 October, U.S. forces in Syria’s Manbij have provided the PKK/YPG terror group with new construction equipment, allowing for terrorists to continue digging up trenches in the city center. 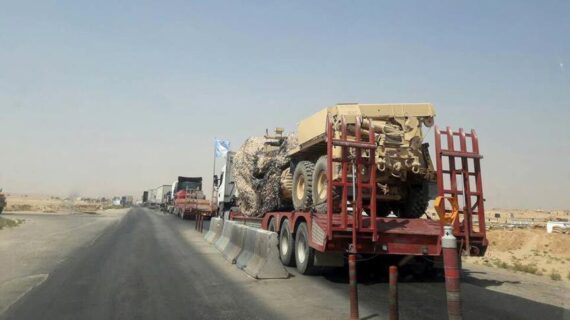 According to news reported from Anadolu Agency on Wednesday 10 October , U.S. forces in Syria’s Manbij have provided the PKK/YPG terror group with new construction equipment, allowing for terrorists to continue digging up trenches in the city center.

The U.S. support to the PKK/YPG in Syria has been a major point of difference between the policies of Washington and Ankara in Syria. While the U.S. believes that they can wipe out a terrorist organization by supporting another, Ankara has insisted that the U.S. regime ought to rule out support for any terrorist organization – regardless of their so-called ideological affiliation.

U.S. troops have continued to provide military and logistic transportation from northern Iraq to northwestern Syria, despite a deal between Ankara and Washington on the withdrawal of the terrorist organization from the city.

The Manbij deal that was reached in June this year was a reassurance to Ankara that the terrorist organization will withdraw from the city in order to stabilize the region.

According to the news produced by AA, local sources also told journalists that the U.S. also sends aid to the PKK/YPG in the region.

In the recent logistic support, trucks carrying four construction vehicles were transported to Manbij. U.S. soldiers escorted the transfer of these vehicles, which included 3 bulldozers and one excavator.

The PKK/YPG use this equipment in order to continue digging trenches and tunnels.

Also Read
The Geopolitics of Turkey’s Gas Discoveries in the Black Sea
We use cookies to optimize your online user experience. To learn about our use of cookies and how you can manage your cookie settings, please see our Privacy Policy. By continuing to use our site you are excepting our use of cookies.Accept Cookies & CloseMore Info