US-Iran Tensions: Trump Seeks a Deal of His Own

In the short and medium term, the interplay between Trump’s need for a deal on his own terms and Iran’s capacity to sustain the economic and political fallout from the U.S. maximum pressure campaign will determine the nature of the standoff. 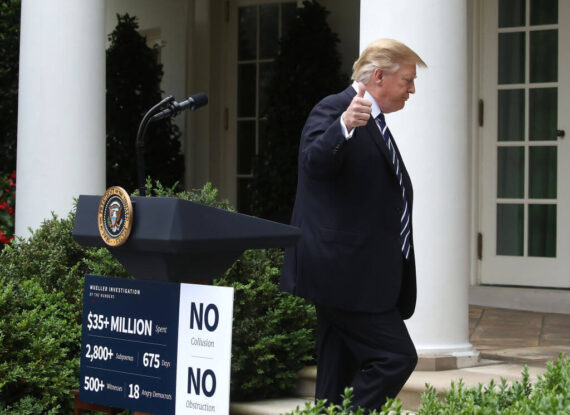 President Donald Trump walks away after speaking about Robert Mueller's investigation into Russian interference in the 2016 presidential election in the Rose Garden at the White House May 22, 2019 in Washington, DC. Getty Images

In early May, Iran announced a 60-day deadline after which the country would start enriching uranium of higher levels than currently allowed under the JCPOA unless some sanctions relief were provided. The U.S. had already withdrawn from the agreement and European allies have been trying to keep the deal alive. Under the pressure of increasing sanctions against oil as well as non-oil exports, the question of how long Iran would continue to honor the deal has been a pressing one. Iranian President Rouhani’s announcement of a partial departure from the agreement is a sign that the JCPOA might just crumble this summer. If that happens, tensions between the U.S. and Iran will keep rising, coming dangerously close to a military confrontation.

President Trump does not seem to want an actual war with Iran. After all, he was elected on a platform that heavily criticized America’s foreign military interventions and promised an “America First” agenda. It is likely that Trump wants to get a JCPOA 2.0 on his own terms, which may resemble Obama’s agreement in content but it will nevertheless be Trump’s deal. For Trump to “get a deal” with Iran, however, it is almost certain that it would have to wait for his potential second term. Trump has been quite an anti-Obama president, as he has sought to reverse Obama’s policies while trying to rebrand any perceived achievements as his own. This might just end up being the case with Iran, where a second term Trump get a deal and claim victory no matter how much it might resemble the original JCPOA. This is pretty much what happened with the renegotiation of NAFTA that ended up creating a NAFTA 2.0 in the form of the USMCA.

It is likely that Trump wants to get a JCPOA 2.0 on his own terms, which may resemble Obama’s agreement in content but it will nevertheless be Trump’s deal.

Trump appears all too happy using strong (and sometimes extreme) rhetoric against countries like Mexico, China, North Korea and Iran. So far, his rhetoric turned out to be a simple tactic of “raising the hand” to get a better deal. It has arguably worked with Mexico and, to some extent, with China but it remains to be seen whether it would work with North Korea and Iran. North Korea has been content with reaping the benefits of international diplomatic recognition without a full commitment to denuclearization. Trump seems interested in a deal with Iran despite his “maximum pressure” campaign. He reportedly tried to meet with Iranian President Rouhani on the sidelines of the UN General Assembly in New York but reverted to the full pressure campaign once the meeting did not materialize. This indicates that the road ahead with Iran may not be as clear.

For one thing, Iran has resisted U.S. pressure campaigns before and despite domestic opposition in addition to the devastating impact of sanctions. Granted that the difference this time is that the Trump administration seems determined to apply an all-out economic pressure campaign as long as necessary. It also cooperates with the Gulf nations plus Israel to push back against Iran’s regional influence. Hawks within the Trump administration are accused of pushing for war although Trump himself said he was only interested in ensuring a no nuclear Iran, which shows he would like a deal of his own with Iran eventually.

Trump appears all too happy using strong rhetoric against countries like Mexico, China, North Korea and Iran. So far, this has turned out to be a simple tactic of “raising the hand”.

The question, of course, is whether a period of mutual escalation may prove uncontrollable and a conflict becomes unavoidable. In the most recent round of escalation, Trump used the danger of Iran to sell Saudi Arabia more weapons systems despite Congress’ opposition. Gaining an economic benefit out of this escalation may have been his main preoccupation to begin with. News reports indicated that Trump authorized the deployment of 1,500 American soldiers to the region although the hawks in the administration and generals on the ground expected more troops. Again, this is another indication that Trump is happy with a “controlled escalation” with Iran that allows him to look tough and brand any inch given by Iran (if at all) as his own achievement.

A military conflict is always a distinct possibility as escalation can certainly get out of control. However, neither side has much to gain from a military conflict. Thus, Trump will likely continue the pressure campaign until Iran gets to the table ready to make serious concessions, which is not very likely any time soon ahead of the 2020 U.S. presidential elections. Until then, the region will have to contend with increased tensions and escalatory moves. How long this state of affairs can be kept under wraps without provoking a military conflict is anyone’s guess. In the short and medium term, the interplay between Trump’s need for a deal on his own terms and Iran’s capacity to sustain the economic and political fallout from the U.S. maximum pressure campaign will determine the nature of the standoff.