The U.S. decision not to include the UAE among the countries the Trump administration issued a waiver to is an indication of the fact that trade relations between Abu Dhabi and Tehran will deteriorate. 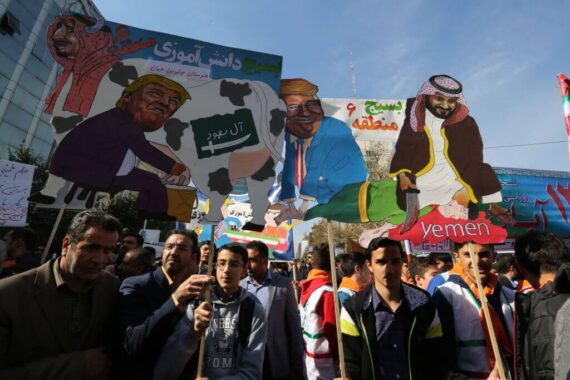 On the eve of renewed sanctions by Washington, Iranian protesters carry placards that mock President Donald Trump, Saudi Arabia's King Salman and Crown Prince Mohammed bin Salman during a demonstration outside the former US embassy in the Iranian capital Tehran on November 4, 2018, marking the anniversary of its storming by student protesters that triggered a hostage crisis in 1979. Getty Images

On November 5, the United States announced a new wave of economic sanctions targeting Iran’s economy, including key sectors such as oil trade, banking, shipping, and air traffic. While sanctions focus on damaging Iran’s economy, they will also have an impact on countries having business with Tehran. The United Arab Emirates is among these countries that will be most affected by the economic sanctions imposed on Iran.The UAE, which has recently been in close cooperation with the U.S., will not be able to protect its current level of trade with Iran. The U.S. decision not to include the UAE among the countries the Trump administration issued a waiver to is an indication of the fact that trade relations between Abu Dhabi and Tehran will deteriorate, despite the long historical ties between the two countries.

Despite political differences and different approaches on regional issues, trade relations between the UAE and Iran have always been strong, mainly because of political dynamics such as geography, expatriates, and cultural similarities. While trade between the two countries decreased during the international sanctions imposed on Iran in 2010, it rapidly increased following the JCPOA agreement in 2015. In recent years, the UAE has become Iran’s most important commercial partner after China. In 2017, 29% of Iran’s imports came from the UAE. As Iran’s most important non-oil importer, the UAE exports products such as electronics, food, textile, construction materials, automotive and industrial tools. In 2013, 96% of exports from the Gulf Cooperation Council countries to Iran were carried out by the UAE, while the figure for imports stood around 62%.

The U.S. decision not to include the UAE among the countries the Trump administration issued a waiver to is an indication of the fact that trade relations between Abu Dhabi and Tehran will deteriorate.

However, with Washington’s sanctions on Tehran, we will witness a significant negative impact on trade between Iran and the UAE. This is particularly observed in the following period of U.S. sanctions on Iran that began in August 2018. In 2017, the UAE’s non-oil exports to Iran were $17 billion, compared to $6 billion in the first 8 months of 2018. As a result of this decrease, Iranian businessmen have started to turn to alternative markets such as Europe, Qatar, and Turkey.

As one of the most prosperous emirates in the UAE, Dubai has been the biggest trade partner of Iran. Around 3,000 ships and boats carry goods between Dubai and Iranian ports via the Persian Gulf. The 150-km long distance is the most important driving factor that allows for Iran to export from Dubai, which is a regional hub for global trade. The Jabal Ali Port is the main point of departure for the goods that are exported to Iran. In addition to that, the majority of Iranian citizens living in the UAE reside and work in Dubai. It is estimated that there are around 10,000 Iranian companies operating in the field of bilateral trade between Iran and Dubai.

Dubai also plays an important role in the oil trade between Iran and the UAE. However, it is expected for Dubai’s imports of 140 thousand barrels of oil per day to be reduced gradually reduced to the U.S. sanctions on Tehran. Emirati officials announced that oil trade between the two countries will reduce to a mere zero by the end of November. Thus, as one of the biggest importers of Iranian condensate in the UAE, Dubai will be the most affected emirate due to U.S. sanctions. In order to find other alternative markets for condensate imports, the UAE has been in contact with the U.S., Australia, and Equatorial Guinea, other important exporters of that product.

It should also be noted that there is some level of disagreement between the Abu Dhabi emirate, which is the most influential in foreign policy in the UAE, and Dubai, particularly with regards to the UAE’s policies towards Iran. In this context it can be stated that Dubai, which has a high volume of trade with Iran, is not comfortable of the aggressive policies pursued by Crown Prince of Abu Dhabi Muhammad bin Zayed Al-Nahyan against Tehran. In 2014, the Emir of Dubai and the UAE’s Vice President Sheikh Mohammed bin Rashid al-Maktoum called for the international community to end sanctions imposed on Iran. Emir Al-Maktoum argued that these sanctions will not only damage Iran’s economy, but will also hurt global trade.

Dubai, which has a high volume of trade with Iran, is not comfortable of the aggressive policies pursued by Crown Prince of Abu Dhabi Muhammad bin Zayed Al-Nahyan against Tehran.

Despite Dubai’s stance, the overall Emirati policy against Iran has been deteriorating as the country has joined the Saudi Arabia-U.S.-Israel alliance, which aims to prevent Iranian expansion in the region. As a result, unlike the eight countries that the U.S. granted waivers to, the UAE preferred not to be included within this group. The Emirati leadership particularly emphasized that it will join the U.S. in implementing the sanctions on Iran.

Sanctions imposed on Iran by the U.S. will seriously affect the UAE – the most important trade partner of the country in the Gulf region. In particular, the UAE emirates of Dubai and Sharjah are concerned by the loss of an important export market. Therefore, while U.S. sanctions will have negative consequences for Tehran, they will also impact neighbouring countries that have strong trade relations with the country, especially those in the Gulf region.