President Trump has been clear that human rights and democracy promotion do not form part of his foreign policy agenda. He instead relies on personal relationships, reassurances and 'alternative facts'. This policy would need to be revisited if Congress supports the return of the U.S. to favor more of a values based foreign policy. 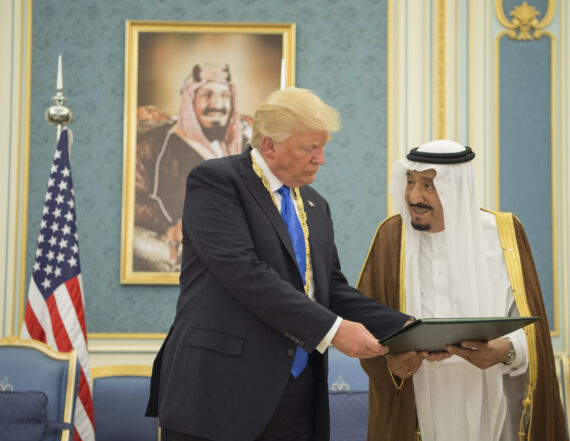 On 2 October 2018, Jamal Khashoggi, a journalist and critic of the policies of the current Saudi monarchy, was killed in the Saudi consulate in Istanbul. His status as columnist with the Washington Post in the U.S., the international response to the nature of his death, and the uncertainty surrounding what happened has created a wave of international press coverage and concern.

President Trump’s response to the incident has been tempered by Saudi oil exports accounting for 13 percent of global crude production and the Kingdom is still perceived to be able to help control oil prices in OPEC as a swing producer. This will be particularly important as the U.S. imposes new sanctions on Iranian oil exports after 5 November 2018. President Trump also claims that more than $110 billion in arms sales are at stake.

Whilst agreeing with Saudi Arabia’s ‘rogue killers’ theory, President Trump sent Secretary of State, Michael Pompeo, to meet with the Crown Prince of Saudi Arabia, Mohammad bin Salman. He then sent a different message, calling the conflicting Saudi version of events surrounding the murder ‘the worst cover up ever‘. In a televised address on 23 October, President Recep Tayyip Erdogan went a step further, saying the murder was premeditated and that he holds intelligence on what happened. The Saudi prosecutor has since agreed that the murder was premeditated.

Germany has quickly haltered arms exports to the Kingdom while urging other EU states to do the same. Quite late in the process, President Trump sent CIA Director, Gina Haspel, to Turkey to assist in the investigation and Secretary of the Treasury, Steven Mnuchin, travelled to six countries in theMiddle East, including Saudi Arabia, visiting the Terrorist Financing Targeting Centre and having meetings in preparation for Iran sanctions. Although he did not participate in the Future Investment Initiative (FII) which has been boycotted by various business and political leaders (including from France, Australia and the Netherlands), he did meet with Mohammad bin Salman who stressed the importance of the U.S.-Saudi strategic partnership.

The initial Saudi response has been to absolve members of the royal family over the incident by firing 5 top officials and arrested 18 other Saudis. In the economic sphere, the Saudi oil minister, Khalid al-Falih, has said that global oil demand will be met no matter what. The international oil price has already dropped from $85 to $76 since the murder. The move has calmed fears amid a global sell-off caused by this incident, along with budget issues for the Italian government and Brexit. It is also helping President Trump in the lead up to the mid-term elections by its knock on effect in gas pump prices, but oil policy could change and stability will be key up to the elections in on 6 November.

In a state department news conference on 23 October, Secretary of State Pompeo announced that the Trump administration would be revoking the US visas of 21 Saudi suspects implicated in the incident. He also talked about the possibility of targeted sanctions on those responsible for Khashoggi’s death. This was after a bipartisan group of senators sent a letter to President Trump in early October which triggered an investigation through the Global Magnitsky Human Rights Accountability Act. The Act was originally intended to punish Russian officials responsible for the death of Russian tax accountant Sergei Magnitsky in a Moscow prison in 2009, specifically preventing implicated officials from travelling to the US or using the US banking system.

Like the Russian case but in contrast to U.S. sanctions against Iran led by the White House under Executive Order, President Trump has given the U.S. Congress responsibility for longer term responses related to the Khashoggi case. Much depends on the congressional testimony of Gina Haspel once she returns to the U.S. and on Turkish officials or further media revelations concerning the circumstances surrounding the death of Jamal Khashoggi. There does appear to be congressional appetite for sanctions on arms sales to Saudi Arabia if there is sufficient evidence to suggest Saudi officials were involved in the murder, but this is yet to be determined.

President Trump’s assertion that U.S. arms deals to Saudi Arabia are worth $110 billion has been cited as being incorrect given that the deals have not all been signed or paid for. Therefore they cannot equate to up to 600,000 jobs at risk and Congress is probably aware of this.

If further measures are implemented against Saudi Arabia, no matter what the Saudi threats would be in response, whether concerning oil production or moves to purchase more weapons from US adversaries such as Russia and China, the Kingdom will remain tied to the U.S. and its security umbrella against Iran. In turn, the Saudis can also be relatively confident that the U.S. needs Riyadh’s compliance to help maximise pressure on Iran, so its response is likely to be relatively low key.

Still, economic fallout from this incident could yet be felt in the Kingdom, the region and in global markets if a set of more robust sanctions are imposed. Saudi Vision 2030, including the diversification away from oil, remain priorities and part of Mohammad bin Salman’s portfolio, along with defence. Continued state intervention in the economy, including the arbitrary detention of hundreds of princes and businessmen at the Ritz-Carlton hotel in Riyadh in November 2017 and capital flight remain real issues in the diversification process. Saudi Arabia is heavily invested in states and markets across the region and internationally through aid, trade and investments. The Public Investment Fund alone (on whose board Mohammad bin Salman sits) has $557 billion of investments, with many in western markets. But it is conceivable that deals such as the $20 billion deal with Blackstone Group Infrastructure Fund could be arranged to maximise privacy and continued investment under almost any conditions. The issue of providing jobs to millions of youth in Saudi Arabia will also be of paramount importance going forward and favours greater economic engagement in the Saudi economy, under the right conditions, not less.

Regionally, Saudi Arabia is a lynchpin of President Trump’s Middle East policy which seeks to contain Iran and support Israel, Jordan and Egypt. In return, the Trump administration has continued to support the Saudi-led intervention in Yemen and remained inarticulate over Saudi and Emirati attempts to isolate Qatar. Should the U.S. and U.K. follow Germany’s lead by suspending arms sales to the Kingdom it would send a strong signal and potentially give Riyadh an incentive to bring its intervention in Yemen to a negotiated end. This could change the overall dynamic of U.S.-Saudi relations in the Middle East and put the bilateral relationship under further pressure. For example, Saudi Arabia was against the U.S. invasion of Iraq in 2003, blamed the U.S. for the loss of its ally President Mubarak in Egypt and turmoil there in 2012 – 2013, and the Joint Comprehensive Plan of Action (JCPOA) that threatened a U.S.–Iran rapprochement. However, such a move might boost U.S. standing in the Middle East more broadly, especially after President Obama’s ‘red lines’ were exceeded by the Syrian government’s repeated use of chemical weapons. The question is whether the Trump administration has the political will to entertain a new approach to the Middle East and develop its capacity in doing so.

President Trump has been clear that human rights and democracy promotion do not form part of his foreign policy agenda. He instead relies on personal relationships, reassurances and ‘alternative facts.’ This policy would need to be revisited if Congress supports the return of the U.S. to favour more of a values based foreign policy.

Dr Robert Mason is Director of the Middle East Studies Center at The American University in Cairo and author or editor of five books, including: Foreign Policy in Iran and Saudi Arabia: Economics and Diplomacy in the Middle East.