US Senator: High chance MBS was behind Khashoggi killing

Republican Senator Lindsey Graham told reporters, "You have to be willfully blind not to come to the conclusion that this was orchestrated and organized by people under the command of MBS." 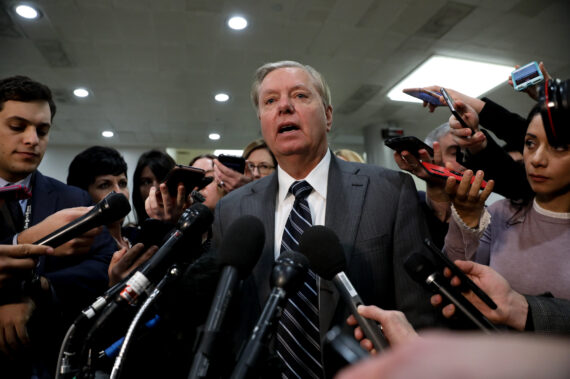 Istanbul’s chief prosecutor has filed arrest warrants for the arrest of a top aide to Saudi Arabia’s de facto ruler Crown Prince Mohammad bin Salman and the deputy head of foreign intelligence on suspicion of planning the killing of Jamal Khashoggi.

Prosecutors say there is ‘strong suspicion’ that royal court adviser chief Saud al-Qahtani and deputy head of intelligence Ahmed al-Asiri were among the planners of the October 2 murder at the Saudi consulate in Istanbul.

The two names were removed from their positions in October while Saudi Arabia has detained 21 people and says it is seeking the death penalty for five over the slaying, which sparked international outrage.

“The prosecution’s move to issue arrest warrants for Asiri and al-Qahtani reflects the view that the Saudi authorities won’t take formal action against those individuals,” one of the officials told Reuters news agency.

“By extraditing all suspects to Turkey, where Jamal Khashoggi was killed and dismembered, the Saudi authorities could address those concerns” added the same official.

According to AFP news agency, the application for the warrants was filed on Tuesday.

The Saudi prosecution has previously acknowledged that al-Qahtani and Asiri were part of the plot to kill Khashoggi. The two men were both high-ranking officials with close ties to Crown Prince Mohammed bin Salman. Al-Qahtani is believed to have been Prince Mohammed’s right-hand man.

Meanwhile in the U.S., after a closed-door briefing by CIA Director Gina Haspel on Tuesday, some top U.S. senators have said there is “zero chance” Saudi Crown Prince Mohammed bin Salman (MBS) wasn’t involved in the murder of journalist Jamal Khashoggi.

Republican Senator Lindsey Graham told reporters, “You have to be wilfully blind not to come to the conclusion that this was orchestrated and organized by people under the command of MBS.”

He added that it appeared that the Trump administration does not want to recognize evidence of the crown prince’s complicity.

Back again in Turkey, Turkish Foreign Minister Mevlut Cavusoglu made comments to reporters while on a visit to Brussels. The United Nations human rights chief on Wednesday called for an international investigation to determine who was responsible for the murder of the Saudi journalist in Istanbul two months ago.

“We will not hesitate to launch an international probe if the situation comes to a deadlock,” he said.

Turkey has been seeking to extradite 18 suspects, including 15 members of an alleged assassination squad accused of murdering and dismembering the writer.

Last month, Turkish President Tayyip Erdogan has said the order for Khashoggi’s killing came from the highest level of the Saudi government but probably not King Salman, putting the spotlight instead on Salman’s heir and de facto ruler Prince Mohammed.

Saudi Arabia has said the prince had no prior knowledge of the murder.

Also Read
A Dissident to Lead All Dissidents: The Legacy of Jamal Khashoggi