President Trump has also given the message that he wants a U.S. pullout of Syria. Multiple priorities and conflicting rhetoric promise the continuation of an incoherent U.S. policy in the Middle East. The strikes were precise but they do not deliver a comprehensive Syria policy. 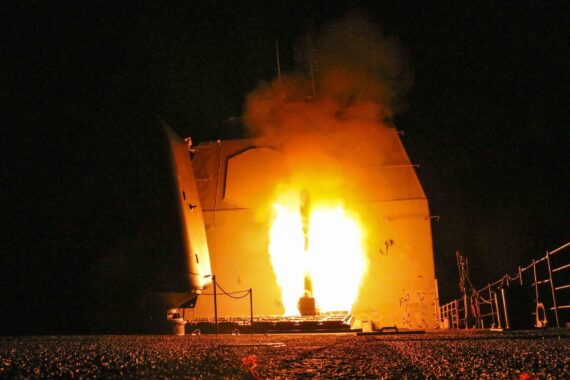 The guided-missile cruiser USS Monterey (CG 61) fires a Tomahawk land attack missile April 13, 2018. Monterey is deployed to the U.S. 5th Fleet area of operations in support of maritime security operations to reassure allies and partners and preserve the freedom of navigation and the free flow of commerce in the region. Anadolu Agency

The U.S. strikes on Syrian chemical weapons facilities have delivered the Assad regime a strong message but a very narrow one. Assad can continue to attack the Syrian people with conventional weapons without fear for the end of his rule. The U.S. military leaders have reaffirmed their long-standing focus on Daesh, thereby clarifying under what specific circumstances the regime would face punitive measures. It has been abundantly clear now that the U.S. would not apply military force to tilt the balance in the Syrian Civil War and these strikes just confirmed that policy once again. Strikes come at a time when the Trump administration has been giving mixed signals about its intentions in Syria.

The military attacks have come in the wake of President Trump’s remarks about getting out of Syria very soon. Many have questioned the wisdom of getting out too soon and leaving the playing field to Russia and Iran. The U.S. military leaders were some of the most immediate opponents of an “immature” military pullout of Syria. The military strikes on the Assad regime seem to ensure that the U.S. will stay in Syria for the foreseeable future. Yet, we need to remember that the precise message of the strikes is not about U.S. presence in Syria but about the use of chemical weapons. The U.S. does not have to be militarily present in Syria to punish the Assad regime thanks to its missile capabilities that we have seen in the attacks over the weekend.

U.S. military leaders have referred to Article 2 of the U.S. Constitution asserting the President’s, as the Commander in Chief, authority to use force for vital national interests. Defining the deterrence and proliferation of chemical weapons as a vital U.S. national interest has an implication that the U.S. will have to enforce this red line in all future violations. This justification steers clear of the war powers debate that has been taking place in some circles, although Congress does not seem to be interested in pushing the President to obtain a new resolution for war in Syria.

The assertion of inherent presidential authority to conduct strikes while relying on the 2001 AUMF in the fight against Daesh seems to emanate from multiple goals defined as national interests by the U.S. leadership. These goals are not always compatible and require different and at times conflicting strategies. While the President seems to think the fight against Daesh is largely completed and that it is time for a pullout, the U.S. response to the use of chemical weapons promises a long-term commitment to the enforcement of the red line. The debate ahead will likely revolve around the lack of an overarching Syria policy that reconciles these tendencies and clarifies the main goal.

The lack (some would argue ambiguity) of a coherent Syria policy has direct consequences for the course of the civil war. The narrow focus on Daesh is combined with a narrow focus on the use of chemical weapons (arguably sarin but not chlorine), which clarifies two priorities but do not add up to a broad policy. This sends the message to the regime that it can survive if it plays by the rules. The tough rhetoric against Iran and Russia does not add up to a broader message about the Syrian Civil War’s endgame. It only tells them that they can continue to support the regime as long as they do not interfere with specific U.S. priorities. President Trump has also given the message that he wants a U.S. pullout of Syria. Multiple priorities and conflicting rhetoric as such promise the continuation of an incoherent U.S. policy in the Middle East. The strikes were precise but they do not deliver a comprehensive Syria policy.