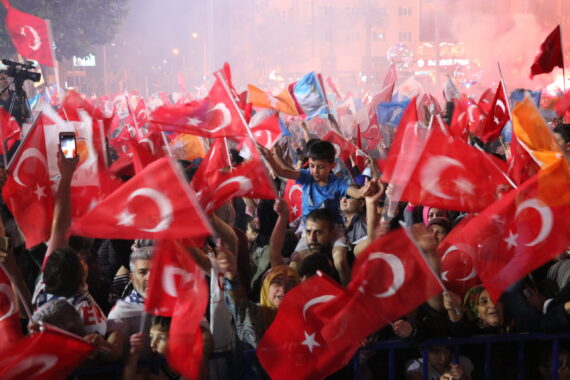 Supporters of the AK Party celebrating the electoral victory on June 24. Anadolu Agency

Local elections in Turkey have always been exposed to various dimensions of politics. Compared to parliamentary elections, the agenda during local elections include different issues such as urbanization, infrastructure facilities, local administration, and ecological subjects. As well as these issues, local dynamics such as close-knit relations and the personal reputation of candidates play a significant role on the results. The dominance of these facts causes different electoral results that deviate from parliamentary elections.

It is a well-known fact that the success or failure of parties in parliamentary elections do not give any clue about the results of local elections. There has always been a gap between the results of these two for all political parties. A political party that is not a significant player in parliamentary elections can become quite successful and win municipalities. As a result of this phenomenon, all parties have different strategies for local elections.

What does micro campaign mean?

Nowadays, while Turkey’s political parties are focusing on their election campaigns, there is an ongoing discussion in the media about the possibilities and limitations of conducting micro-campaigns. Micro campaigns mean conducting election campaigns for a narrower target group, such as women, unemployed people, and youth, rather than focusing on the whole population. This method enables politicians to diversify the content of their campaigns and develop a multi-discourse for them.

Indeed, micro campaigns have been quite popular in the U.S. in the last decade. Especially in the election campaign of Trump, which was micro-targeted and which successfully utilized social media channels. When it comes to Turkey’s local elections, it is crucial to develop best practices for each electoral district.

The AK Party is the pioneer of micro-campaigns in Turkey’s elections. It is seen that the party always focuses on inviting new options for election campaigns in accordance with the country’s current dynamics. For instance, President Erdogan announced that traditional election campaign methods causing visual and noise pollution will be eliminated in the local elections process. Thus, the party will develop new options in order to attract new voter profiles and to implement more environmentally-friendly methods.

Indeed, since the party has always paid attention to these issues, it has become more successful in drawing support from new voters. According to the results of some surveys, the AK Party is still in first place among other political parties in terms of gaining new votes. Nevertheless, it is also a fact that the party should pay more attention to these voters and invent new options in order to get support from these groups.

It is possible to see that the AK Party will adapt a much well-developed micro-campaign strategy this time. The first dimension of this campaign will be to use a problem-solving approach for each electoral district by focusing on the most crucial problems faced. Rather than implementing a traditional discourse, the party may focus directly on concrete problems and their solutions. Furthermore, the party may focus on adapting specific discourse for each electoral district in order to reflect the expectations of voters.

The second dimension of this campaign may be to use social media channels more effectively rather than focusing on TV and newspapers. This can be one of the most important parts of a micro-campaign strategy, which is popular all around the world. Using this method requires adapting a dynamic rather than static election strategy that can be renewed according to changing expectations.

It is not an easy task for all parties to adopt micro-campaigns for each electoral district. Using this strategy requires renewing the basis of the campaign in each step. Nevertheless, it will be a good change for Turkish voters to see various practices of micro-campaigns on the local level.