The main opposition Republican People’s Party (CHP) Chairman Kemal Kılıçdaroğlu has made an allegation this week; actually, it would be more accurate to say that he has reiterated an allegation that he had made in January. “On July 15, a controlled coup attempt was realized,” said he. 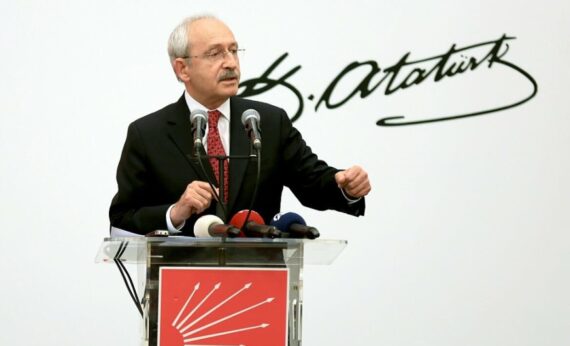 The main opposition Republican People’s Party (CHP) Chairman Kemal Kılıçdaroğlu has made an allegation this week; actually, it would be more accurate to say that he has reiterated an allegation that he had made in January. “On July 15, a controlled coup attempt was realized,” said he.

We have a saying in Turkish which can be roughly translated as “it’s not enough to claim insanity; to be truly insane, you have to blab nonsense.” It seems that the main opposition leader has found his source of nonsense. In fact, the members of Fetullah Gülen’s cult loved this allegation and immediately showed their support. Even though this allegation doesn’t acquit them, they believe that it will eventually catch up with Erdoğan, causing him to lose support. They even could be the originators of the allegation, as it’s not something they haven’t done. They have already fabricated countless contradictory versions about what happened on July 15. Gülen himself and his men have made these claims at various times through different channels both in Turkey and abroad. The most famous is the following: “The junta was organized by Erdoğan. The junta consisted of Kemalist personnel, maybe some of our [Gülen’s] men were also in it; however, Erdoğan was aware of the coup attempt.” I’m not sure whether it’s his original idea or not, but the main opposition leader essentially implied the same: “President Erdoğan allowed the coup which was attempted by Gülen’s infiltrators within the army.”

Let’s suppose that the president was aware of the coup attempt beforehand and allowed Gülenists to attempt the coup in order to uncover and disarm all Gülenists within the state, while consolidating his own power. With this purpose, he has “let the organization which infiltrated the very heart of the republic just pass by.” Are such calculations and risk analyses possible? Who was Erdoğan going to trust? NATO or the EU? The international community would just publish a couple of statements which condemn the coup –that even didn’t happen after the coup in Egypt – and have no practical use. Or, when the junta controlled all garrisons, main roads and bridges, and the headquarters of National Intelligence Organization, Police Special Forces, along with the Parliament, was under attack, with what force could Erdoğan save the country? Did he have any kind of militia? Forget the country; how was he going to save his own life? Did Erdoğan have some sort of metaphysical or diabolic power, according to these allegations?

A true Junta is the successful one!

As far as it could be understood, the main opposition leader implied that a junta in Turkey has to be successful. If he had just made this statement before July 15, he could’ve had a point. As you know, the tradition in Turkey is to open your eyes in the morning to a junta. Whenever Turkey diverges from its assumed role, a junta appears. The junta deposes the government, hangs the prime minister along with some ministers, while jailing and torturing thousands. This was exactly what happened on May 27 1960. Citizens learned that the military seized control of the country at 04:36 on May 27 with a broadcast from Ankara on the radio. The leader of the coup General Cemal Gürsel announced the members of the National Unity Committee which was to handle legislation instead of the parliament. The next day the National Unity Government was formed. A couple of days later, Minister of the Interior Namık Gedik committed suicide, while Prime Minister Adnan Menderes, Foreign Minister Fatin Rüştü Zorlu and Finance Minister Hasan Polatkan were executed.

The first military coup of Turkey which was carried out after the transition into the multiparty system was nothing short of a shameful event in the young republic’s history.

On March 12 1971, however, a different kind of military coup was realized. This time the military deposed the Süleyman Demirel government with a memorandum broadcasted on the state-run TRT, which was signed by three force commanders and the chief of general staff.

At 03:00 on September 12 1980, the military once again seized the power. Consisting of the Chief of General Staff Kenan Evren and force commanders, the National Security Committee announced the coup declaration via the only TV channel of the time, TRT. The reason was the same as the 1971 coup: “Turkish Armed Forces came together under the chain of command and seized the control of the whole country to fulfill the duty of protecting the Republic of Turkey in the stead of its people, as it is stated in the Internal Service Code.” With the following declarations, commanders were assigned to regions under martial law. At 05:30, notifications signed by the chief of general staff were sent to Süleyman Demirel, Bülent Ecevit and Necmettin Erbakan.

It was written “Turkish Armed Forces have seized the control of the state. Your government has been abolished and your parliamentary membership has been dismissed. Please listen to the instructions of the officer who brought you this notification” on the said notifications. None objected. The first ones to be executed right after the coup were the leftist Necdet Adalı and right-winger Mustafa Pehlivanoğlu. Junta Leader Kenan Evren expressed that they were being impartial by saying “we have executed one from the left and one from the right.” Executions of 7000 people were requested, while more than 500 were executed. Moreover, almost a thousand people died of executions, torture, under suspicious conditions in prison or by committing suicide.

Considering all these experiences, Gülen, who still lives in the US, was right to believe that the Turkish government could be deposed with a military coup. This organization which named themselves as the Hizmet Hareketi (Service Movement) and infiltrated the military since the 1980s clearly calculated the following: When a threat to the status quo appeared, there always was a way, even if the other methods were exhausted; to depose the government with a junta. No political party leader had ever resisted the coup; they weren’t able to do so, as the people had never taken to the streets during coups. The tradition was that the people would react against the junta in the first elections after the coup by electing an anti-status quo party. Nevertheless, many components of the democratic system would be damaged more by each coup.

Indeed, Osman Özsoy, one of Gülen’s well-known followers, had answered questions on a foreign TV channel owned by Gülen a month before the coup. The true meaning of the broadcast was understood after the July 15 coup attempt.

“We don’t have to tell everything on the TV screen. I will just say that beautiful days await us. Hectic days await our friends within the Service Movement. Don’t be fooled by the fact that 50% of the people support Erdoğan. I’m a professor of political science, heed what I will say: if the people are told that there is a curfew, none will go out on the streets. Even imams will be afraid to go to attend their mosques. All coups in Turkey were carried out on Fridays.  The people of Turkey don’t have such sensitivity to protect democracy. They are only a crowd. Maybe a couple of leftists will go out on the streets for rights and freedoms; however, none of the intellectuals of the right will go out on the streets. I guess the Justice and Development Party (AK Party) has 5-6 million members and you can seize all their properties …”

What was he implying? “We will depose them and seize the power. Because there will be no opposition as none will stand against a coup, including the 50% of Turkey’s population who support Erdoğan.”

None could truly imagine that all kinds of people who love their country, regardless of their view of Erdoğan, would go out on the streets and stand against tanks in most imaginative ways. Erdoğan had a close call; while his plane was lifting off from Marmaris, there was an armed conflict at the hotel he was staying. His bodyguard was killed. There were also bizarre events. A think-tank named Stratfor published the coordinates of Erdoğan’s plane over the internet while he was flying towards Istanbul. There were countless speculations about Erdoğan fleeing Turkey; Gülen’s followers also spread these lies. TRT was captured, Türksat headquarters was bombed. President Erdoğan addressed the public through CNN Türk Ankara Bureau Chief Hande Fırat’s mobile phone using Face Time: “This attempt against the unity of our country will face defeat with the people’s will. They will pay for what they have done and we will not let them reign free. I beseech the people to gather at town squares and airports. I have known no power over the power of the people.” After this 2-3 minute-long address, people from all cities took the streets. You know the rest.

After three coups, a leader stood against the putschists for the first time and called the people to take the streets, which they did. Despite hundreds of martyrs and thousands of wounded, an epic of democracy was realized.

The mother of a young male who was killed by the putschists on the night of the coup said the following to a journalist: “Those putschists had calculated everything. Everything! But they were unable to calculate my son Recep.” The junta failed because of people like her son Recep.

By the way, a little note: a controlled coup isn’t a completely unsuitable concept for this attempt, as there are very concrete suspicions about the international dimension of Gülen’s cult and that they are being employed as a subcontractor for certain forces. At least those who have attempted the coup know who are aiding them. The people have their own opinion as well.