Washington Meeting Is a Promising Step to Repair Strained Relations

The meeting between President Erdogan and Trump did not solve all the intractable problems. But it was an important step to create a conciliatory environment in order to start further negotiations. 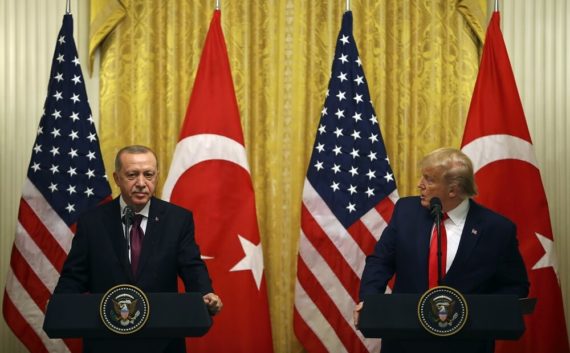 President Erdoğan met President Trump in the White House last Thursday. The content of the meeting largely met with expectations, and some of the key issues discussed included the issue of the YPG, the S-400-F-35 dilemma, the future of Syrian refugees, the FETO problem, the Halkbank case, and the Armenian bill. While a number of key issues remained unresolved, the meeting indicated a mutual commitment towards improving bilateral relations into the future. Although two issues at the top of the agenda, the YPG issue and the S-400-F-35 dilemma, were not resolved, President Erdoğan and President Trump underlined that Turkey and the US will continue to work on the resolution of key issues in the following days.

During the meetings with the President Trump and the members of the Senate, President Erdoğan stressed that the YPG could not be accepted as a legitimate organization representing the Kurds in the Northern Syria. President Erdoğan also shared evidence of the involvement of the YPG in terrorist attacks with the US officials. Moreover, a comprehensive report covering Turkey’s arguments prepared by Turkey’s Directorate of Communications was presented to the US side. Nevertheless, the US side seems eager to continue their relations with the YPG since the U.S. Secretary of Defense Mark Esper recently stated that the “good relations” between the USA and the YPG would continue.

When it comes to the second most critical issue, the S-400-F-35 dilemma, both countries had a clear conflict of interest. The US stated that Turkey could be accepted into the F-35 program so long as it does not activate the Russian S-400 missile air defense systems. However, President Erdoğan stated that this option was not compatible with Turkey’s interests. Thus, both countries will need to continue to negotiate on this issue to find a common solution.

The future of Syrian refugees, the FETO problem, the Halkbank case, and the Armenian bill were other critical issues discussed during the meeting. President Erdoğan underlined that Turkey had already sent the necessary documents to the US to resolve the FETO problem, which includes the extradition of the FETO leader and shutting down FETO-affiliated schools and institutions, an issue which remains of utmost interest to Turkey. However, the US side did not provide an official response to Turkey’s requests, and it seems that the FETO problem, the Halkbank issue as well as the creation of the safe zone in Northern Syria are all issues still waiting on the negotiation table.

However, the first concrete outcome of the meeting was the blocking of “the Armenian genocide” bill in the Senate. Prior to the meeting, President Erdoğan had already expressed Turkey’s concerns regarding the bill with President Trump. After the meeting, Senator Lindsey Graham emphasized that lawmakers should not “sugarcoat history or try to rewrite it” and moved to block its passage in the Senate.

Overall, it is obvious that the meeting did not solve all the intractable problems between both countries. However, it was an important step for both countries to create a conciliatory environment in order to start further negotiations to solve more deep-rooted issues. Since both countries have used face-to-face negotiations to solve the ongoing problems between the countries, it seems this will occur into the future especially in relation to the Syrian issue which is likely to occur in upcoming days.