Waves of the US Sanctions on Iran: A Chronology

New sanctions that might be imposed by the U.S. against Iran might put an end to the diplomatic doors between the two countries. 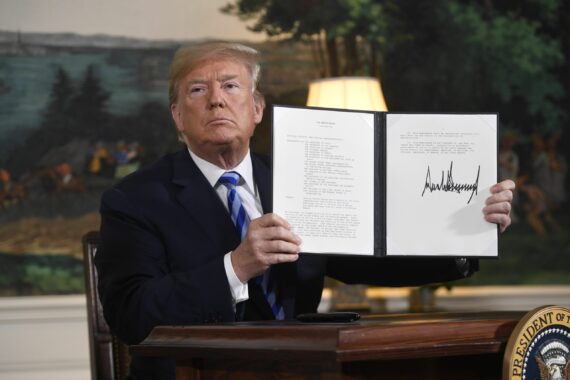 U.S. President Donald Trump signs a document reinstating sanctions against Iran after announcing the U.S. withdrawal from the Iran Nuclear deal, in the Diplomatic Reception Room at the White House in Washington, DC, on May 8, 2018.

On July 14, 2015, Iran agreed a long-term deal on its nuclear program with a group of world powers known as the P5+1 – the U.S., UK, France, China, Russia and Germany. The agreement was signed after a long period of negotiations and tensions over Iran’s alleged efforts to develop nuclear bombs and missiles. Under the Joint Comprehensive Plan of Action (JCPOA), Iran agreed to limit its nuclear activities and allow IAEA to achieve international inspections in return for the suspension of deactivated economic sanctions.

Under the JCPOA, Iran’s 20,000 centrifuges were limited to installing no more than 5,060 of the oldest and least efficient centrifuges at Natanz until 2026. Iran’s uranium stockpile was also reduced by 98% to 300kg – a figure that must not be surpassed until 2031. Iran was also ordered to keep the stockpile’s level of enrichment at 3.67%. More, Iran will not be permitted to build additional heavy-water reactors or accumulate any excess heavy water until 2031.

Sanctions imposed on Iran before the deal by the UN, U.S. and EU, in an attempt to force Iran to halt uranium enrichment crippled the country’s economy, costing the country more than $160 billion in oil revenue from 2012 to 2016. However, under the deal, Iran gained access to more than $100bn in assets frozen overseas and was able to resume selling oil in the international market by using the global financial system for trade.

After two years of stable relations among the parties, relations went sour between the U.S. and Iran as a result of the U.S. withdrawing from the so-called “Iran Deal.” The withdrawal came under the Trump Administration after President Trump announced that the nuclear deal is “defective at its core.”

The first round of renewed U.S. sanctions imposed on Iran as part of Washington’s strategy to apply “maximum pressure” on Tehran over its alleged malign activity came into force on 7 August, 2018. These sanctions prohibited Iran’s purchase of U.S. dollars and precious metals as an attempt to cut the country off from the international financial system. Broad sanctions on Iran’s industry, ranging from carpets to health care and to the automotive and aviation sectors were also re-imposed.

A second chain of U.S. sanctions on Iran’s oil and gas sector was imposed on 5 November. More than 700 Iranian individuals, entities, vessels and aircraft was put on the sanctions list, including major banks, oil exporters and shipping companies. More than 100 big international companies had withdrawn from Iran due to the sanctions, which further escalated tensions between the two countries.

On 8 May, 2019 – the anniversary of the U.S. withdrawal – Iran gave a 60-day deadline to the remaining parties of the deal – China, France, Germany, Russia and the UK – to protect it from U.S. sanctions. Especially Tehran urgently demanded the E3 -France, Germany and the UK- to fully activate the INSTEX, which was founded after the U.S. withdrawal and the re-activation of the sanctions to continue trade with Iran, and to maintain their Iranian crude imports without constraint.

However, the point here is that although E3 announced that the INSTEX is now operational from July 1, 2019, Tehran is still not content with it since the scope of the mechanism is limited to humanitarian goods like food and medicine, does not have any effect on Tehran’s oil trade, which is the most revenue generator sector of its GDP.

Iran had suspended commitments it made under the terms of the 2015 nuclear deal, and Rouhani declared that Tehran would hang on to its stocks of excess enriched uranium and heavy water instead of exporting them. He also threatened to resume enriching uranium in 60 days, above its limit in case the remaining signatories do not make promises to shield the oil and baking sector from further sanctions.

At the end of the 60 days Iran set as a period for the remaining parties of the nuclear deal to make progress on the relief of sanctions, Iran declared it resumed enriching uranium above a concentration of 3.67% and threatened to keep reducing its commitments every 60 days until other parties to the deal could protect Tehran from the sanctions.

After Iran announced that it will break a limit set on uranium enrichment, in breach of the limit set on the 2015 nuclear deal, already existing tensions between Iran and the U.S. escalated to a new high.

On 8 July 2019, Tehran threatened major powers that they will not be able to negotiate a better deal than the landmark 2015 nuclear deal. Iran also threatened to restart deactivated centrifuges and ramp up its enrichment of uranium to 20 percent purity, which will constitute its following potential big moves away from the deal that Washington abandoned last year.On July 8, President Trump warned Iran that it “better be careful,” responding to Iran’s announcement that Tehran has breached the uranium enrichment limit set in the international nuclear accord.

Mike Pompeo also reacted on Twitter: “Iran’s latest expansion of its nuclear program will lead to further isolation and sanctions. Nations should restore the longstanding standard of no enrichment for Iran’s nuclear program. Iran’s regime, armed with nuclear weapons, would pose an even greater danger to the world.”

Javad Zarif, Iran’s foreign minister, asserted that the steps were “reversible” if European states carried their commitments. Zarif also stated that expecting Iran to reduce its uranium enrichment level to “zero” is a “delusion.”

More, White House National Security Adviser John Bolton said on Monday that the U.S. will keep increasing pressure on Iran until it abandons its pursuit of nuclear weapons and ceases its “violent activities in the Middle East.”

New sanctions were about to be imposed on Iranian bureaucrats, especially foreign minister Zarif, after the U.S. Treasury Department sanctioned the Iranian Supreme Leader Rouhani’s office in June. İt was said that any further sanction against Iran might put an end to the diplomatic doors between the two countries. However, The United States made a decision, on 11th of July, to hold off the sanctions imposed on the Iranian Foreign Minister Mr. Zarif, which constitutes a positive step towards opening the diplomatic door again amongst the 2 countries.