When Arabs arrived in Central and South America, they had nothing but the clothes they wore. They were called “Turcos” as they carried Ottoman passports. 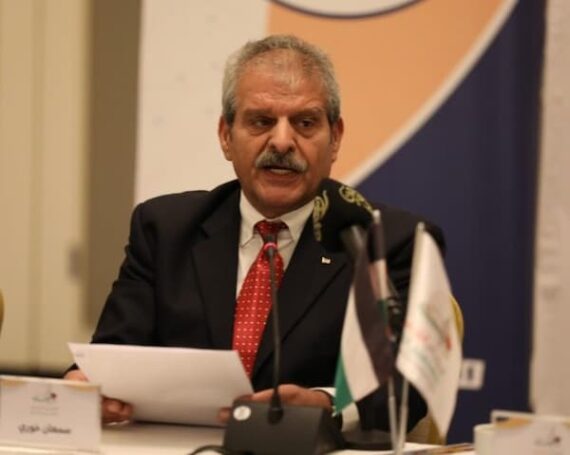 When Arabs arrived in Central and South America, they had nothing but the clothes they wore. They were called “Turcos” as they carried Ottoman passports. Today, they are wealthy and occupy important positions. Are they “sons who lost their mothers,” as a poet once put it? Do they maintain their ties to Palestine, Syria, Lebanon, and Jordan, the lands of their ancestors? Yousef M. Aljamal of Politics Today spoke with Simán Khoury, a Palestinian-Salvadorian, who serves as the president of the Palestinian Federations in Latin America, about the ethnically Arab populations in Latin America today.

Q. When people of the Levant arrived in Latin America in the late nineteenth century, they were called “Turcos.” Can you tell us about this? What does it mean and how do South Americans perceived the term?

The Arab immigration, especially from the Levant or Greater Syria, to Latin America was mostly in the late nineteenth century during the period of the Ottoman Empire. All those immigrants held Ottoman passports. So basically, people there did not distinguish between Arabs and Turks, and they called us all “Turcos” (Turks).

Q. What is the reason for this contempt of “Turcos”?

The majority of those who immigrated at that time were poor and ordinary people, mostly peasants. Ordinary Latin Americans, who lived and thought in feudal structures, considered them as inferior, lower-class people.

When our grandparents and our great-grandparents arrived there, four, five, or six generations back, they did it barefoot, which means that they were in a dire economic situation.

Q. What was the stereotype in the minds of immigrants about Latin America? I mean economically.

They were men of modest substance. Everyone wanted to go to America, meaning North America, and had no idea about possible differences between North, Central, and South America. They thought that they were going to North America. However, they arrived at Puerto Colombia, in Colombia, or in Cuba, where they split up. Some went to Chile, some went to El Salvador, and from there to other places, especially the places where they had relatives, if any.

Q. Why are Levant immigrants mainly concentrated in Chile, El Salvador, and Honduras?

There are about a million Palestinian immigrants in Latin America. The majority almost are from Palestine, especially from Bethlehem. In addition, the majority of those immigrants were Palestinian Christians from the city of Bethlehem. Chile has about half a million Palestinians, and there are maybe some 200,000 in Honduras, and 120,000 in El Salvador. Although there are people who say that these numbers are exaggerated, I am sure that they exist and we have statistics supporting that.

Q. There is a saying, which goes “In every town in Chile, there is a priest, a policeman, and a Palestinian.” Can you tell us more about Palestinians’ impact in Latin America today? What are their positions, their economic status, their cultural, political, and societal status?

When immigrants arrived, they were in a miserable economic situation and suffered from extreme poverty, but they managed to integrate. First, they worked as street vendors and this contributed to their marginalization by the feudal and wealthy classes. But they managed to set up shops and work in textile factories. Gradually, their financial situation improved, which led to an improvement in their social situation. These immigrants struggled for their children to live a better life. They sent their children to schools and universities, and were able to obtain a better social status.

The Palestinians have done a great job for Colombia, in particular. Colombia has Syrian and Lebanese populations as well. All the Levantines have integrated in the Latin American societies of the countries they live in. They have become both loyal citizens and haven’t forgotten their home countries.

Q. Can you give me examples of Arabs, be they Syrian, Lebanese, or Palestinian, who have occupied important cultural, political, and economic positions in Latin America?

In El Salvador, Arabs could obtain very good cultural and scientific positions, so we have doctors, engineers, artists, politicians, and bankers among them. In the agriculture sector, there is a large group of people, Palestinians, who are responsible for almost 44% of the production in the industrial and trade sectors of El Salvador. This means that 44% of the country’s production is in their hands, although they make up 1.5% of the population (nearly 120,000 people). This includes both the industrial and the trade sectors. Furthermore, they make important contributions and influence the medical laboratories and healthcare sector.

In the agriculture sector of El Salvador, there is a large group of Palestinians, who are responsible for almost 44% of the production in the industrial and trade sectors of El Salvador.

In Honduras, the number of Palestinians is much greater. I remember in 2005, when the presidential elections took place after the end of the civil war, Elías Antonio Saca González was the candidate for the right wing and from the left there was Schafik Handal – both were of Palestinian origin and President Saca González won the election.

In 2009, municipal elections for the capital took place and the capital mayors are generally accepted as future presidential candidates. A young man from the Samoura family, which has roots in the city of Bethlehem, ran as the representative of the right against the current president, Nayib Bukele, who represented the left. The mayor of the municipality was a Salvadorian Palestinian. Bukele succeeded him at that time, which paved the way for him to be the current president of El Salvador.

Q. You have spoken about the relations that still link the Latin American Levantines with the Middle East. How do you see the new generation, especially with the Internet and easy access to information? Do they try to restore this relationship and the link between them and their countries of origin? If yes, how do they express this?

Although these migrations took place a long time ago, 80, 100, or 120 years ago – for example, I immigrated 41 years ago – the link between Palestinians and their homeland, despite the fact that they belong in the countries they are currently in, is excellent. They visit their homelands, whether Palestine, Syria or Lebanon – especially the Lebanese, who live in large numbers in Brazil, reaching 7 million.

They still send money and other kinds of aid, whether from Chile, Brazil, or El Salvador to their families there and continue to visit them. As an expression of our cultural identity, we participate in pro-Palestine political and cultural events on every possible occasion and follow the latest news. We have activities, including political ones, to support the Palestinian cause. We have many people in El Salvador who are politically active and support the cause.

This has a great impact on our relationship. In 2017, with the presence of a left-wing government and the activism of the Palestinian community, we were able to close the Israeli embassy in El Salvador. However, the current situation is different due to the economic power of the Jewish lobby in South America.

In 2017, with the presence of a left-wing government and the activism of the Palestinian community, we were able to close the Israeli embassy in El Salvador.

At present, Palestinian embassies are not showing enough effort to influence these countries diplomatically and win their support. This is surprising because this cause is fundamental, it is about displaced people who are being expelled from their lands by brutal force. I personally blame Palestinian diplomacy because there are many countries, even when Chile was ruled by the right, which are still supportive of Palestine. For example, the President of the Republic of El Salvador Elías Antonio Saca González visited Palestine and he was a right-wing politician. He visited his family, the city of Bethlehem and Palestine, while currently, there are leftist countries that try to destroy these relations.

Two months ago, we published an article on the controversial issue of using models with the Palestinian keffiyeh in the training of the Panamanian police by the Israeli police. What are the reflections on this in local society?

Even though we have a large group of Palestinians in Panama, who have the upper hand in the country economically, the incident shows that the Israeli lobby is strong. I have personally been to the city of Cologne, where the greatest merchants in the Colon Free Zone are Palestinians. The community is doing what it can and we cannot blame them. What’s sad is that the Palestinian community has not had enough support from the Palestinian government or the PLO during the last three or four decades.

Is it possible to form a lobby that supports the rights and demands of the Arab Middle Eastern communities in Central and South America, similar to, for example, the Jewish lobby in the U.S. so that it presses, for example, for the recognition of the Palestinian state? In entire South America, Mexico and Panama are the two states, which haven’t yet recognized Palestine.

There is a lobby in Chile. For example, we have around 12 parliamentarians of Palestinian origin, and there is a league of these parliamentarians to support the Palestinian cause. Similarly, although this lobby is currently less effective in El Salvador, they nurture considerable support in Latin America in general.

VIDEO: Why So Many Palestinians Live In El Salvador

The Palestinian lobby is there, and the communities are doing what they can. With every means possible, we defend our cause by eating our traditional food such as humus, and wearing our traditional clothes and T-shirts with maps of Palestine on them. We have parties to celebrate the dabke, and our heritage is alive. As for the legitimate, diplomatic, and legal representation of the Palestinians, this partly falls upon the embassies, and they have to play their role and help our communities create this lobby. The Palestinian cause is just and legitimate, but we must work harder.