During the campaign, Trump had benefited immensely from his tough talk on Daesh while criticizing the Iraq war (albeit belatedly). His latest announcement about getting out of Syria is reminiscent of his predecessor’s approach as well as a reflection of the American public’s non-interventionist inclination. 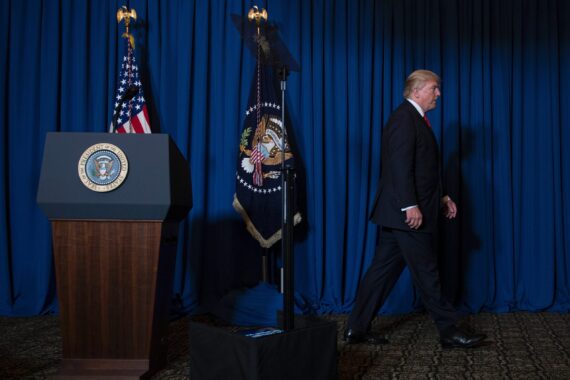 It was only in January when former Secretary of State Tillerson announced a Syria policy with several goals (ensuring no return of Daesh, countering Iran, and the return of refugees) but with no clear strategy to achieve them. President Trump made his views known at least partially by removing Tillerson not long afterward. Following the Pompoe and Bolton appointments, President Trump just announced last week that the U.S. would pull out of Syria “very soon.” Tillerson’s policy announcement had suggested an open-ended U.S. military commitment in Syria but Trump’s statement refers back to his campaign rhetoric that promised overwhelming firepower against Daesh yet saw Syria as somebody else’s problem.

Ironically, the Obama administration had refused to intervene in Syria early in the conflict until the emergence of Daesh, to which it responded with a policy of supporting “local partners” such as the YPG in northern Syria. Trump continued this policy because he wanted to declare victory against Daesh but has not created a major initiative to resolve the Syrian crisis. Trump did not seem to mind that Russia and other regional powers like Turkey took the lead in the diplomatic track. While U.S. military leaders and diplomats criticized Turkey’s most recent Afrin operation, President Trump himself avoided any public comments on the issue. Clearly, this policy disconnect between the White House, Pentagon and the State Department is partially responsible for these differences but it is also because Trump is not committed to Syria for the long haul.

If he follows through with his promise despite grumblings from U.S. military leaders on the ground about the lack of strategy and an early withdrawal, President Trump will actually be more in line with the public opinion that does not see the Syrian civil war as America’s problem but is willing to tolerate a campaign against Daesh without a long-term commitment. Many foreign policy analysts have questioned the wisdom of withdrawing from Iraq prematurely and not intervening in Syria early in the conflict. However, it seems that the somewhat conflicted American public opinion that sees a need in fighting Daesh but is against serious military commitments in the Middle East wins the day for both Presidents Obama and Trump.

Of course, geopolitics and strategic interests have a way of undermining the weight of public opinion and presidents often prioritize national interests, which they sometimes have the luxury of defining. Both Obama and Trump defined defeating Daesh as national interest but Syria’s stability was not a core U.S. interest. During the campaign, Trump had benefited immensely from his tough talk on Daesh while criticizing the Iraq war (albeit belatedly). His latest announcement about getting out of Syria is reminiscent of his predecessor’s approach as well as a reflection of the American public’s non-interventionist inclination.

It remains to be seen whether, when and how Trump may be able to end U.S. military presence in Syria. For this to happen, the Trump administration would have to define what the primary U.S. national interest in the region is. For the new comers to his administration, the answer is Iran and they may argue that being in Syria is essential to countering Iran among other goals. On Iran, Trump will likely pull the U.S. out of the nuclear deal but it is not clear whether the administration will seek to create a comprehensive policy to counter or contain Iran. It may just be that Trump orders U.S. troops out of Syria without a larger Syria policy. Similarly, he might pull the U.S. out of the nuclear deal without an Iran policy in place. This would mean more uncertainty for the region. This would also mean the continuation of the weakening U.S. leadership in the Middle East trend but it may just be what Trump would label as “America First.” And perhaps, that’s what many Americans want.