What are Israel’s Red Lines in Syria?

Israel will continue its precision airstrikes in Syria and increase its focus on the Israel-Syria border as well as its attempts to limit the Iranian presence in Syria within its own capacity and keep waiting for the U.S. to implement a more extensive strategy to fight Iranian influence. 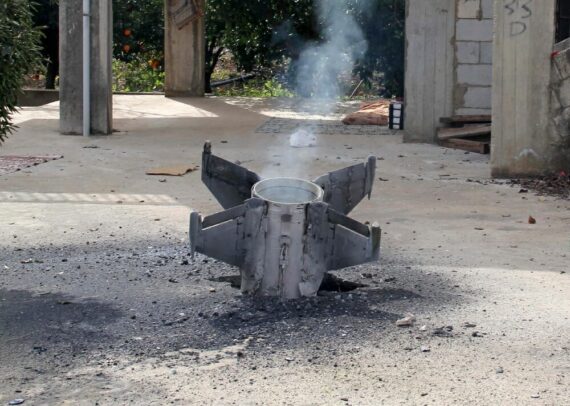 Israel has become increasingly mentioned in matters regarding the conflict in Syria, but this was not the case during the past seven years. Over the course of the conflict, Israel closely followed the developments in Syria, did not hesitate to interfere when it saw it as necessary, and tried to shape the Syria-Israel border according to its own priorities.

Israel has had two main priorities in Syria since March 2011. The first has been preventing Hezbollah from acquiring any weapons from Iran that could be considered “game changers.” With this purpose, several locations in Syria, including the capital Damascus, were targeted by Israeli airstrikes. Existing deployments were also targeted to prevent the military capacity of militia groups acting under the guidance of Hezbollah and Iran from advancing in terms of the threat they posed on Israel. For until 2011, the Iranian threat on Israel was perceived as coming from the Israel-Lebanon border and the limited military capacity of Hezbollah. Israel paid the price of Iran’s technology transfer to Hezbollah in the 2006 Lebanon War, during which the number of military vehicles lost was enough to change the course of the conflict. Due to this reason, preventing a similar situation from occurring again has been one of Israel’s top priorities in Syria.

The second priority of Israel in Syria has been preventing any groups acting under the guidance of Iran from acquiring territory along its border with Syria. The Israeli-Syrian border had been the most secure border of Israel since the 1980s. Even though the war between the two countries was ongoing on paper and Israel was occupying Syrian land (the Golan Heights), the Assad regime never sought an aggressive policy towards Israel. Attempts at infiltration and harassment over the border were thwarted by troops under the direct command of Maher Assad. On the other hand, Israel achieved critical strategic dominance by building observation and radar systems on Mount Hermon that enabled to observe the military activities in Damascus in real time. But after March 2011, the calculations of Israel had to be changed due to the Syrian regime’s loss of control over the lands along the border, the pouring of many pro-Iranian militia members into Syria and the control of the border passing to rebel groups. Israel, which had previously preferred the Assad regime as a “familiar enemy” over the unfamiliar rebel groups, prioritized the establishment of a de facto buffer zone along the Israeli-Syrian border after the regime lost control of the region.

Despite the military actions taken by Israel to implement the priorities discussed above, the Assad regime continuously avoided reacting in a manner that would completely oppose Israel. Despite Israeli airstrikes that did not only target Hezbollah and Iran but also the regime, Syria chose to remain silent. More precisely, the discursive responses never turned into military actions. This had two main reasons. One was that the Syrian regime did not want to oppose a strong actor like Israel when it was already dealing with rebels and facing an erosion of its power and influence to such a great extent that it warranted an intervention by Russia. Any damage to the regime’s air force capabilities would compound the threat posed against it by the rebels. The second was that Russia, which evolved from a trusted ally to the regime’s main reason for survival during the conflict, did not allow any attacks against Israel. Ultimately, the control of air defense equipment that would deter or defend against Israeli airstrikes was in the hands of the Russians. For these reasons, Israeli airstrikes were not reciprocated by military action.

But the tension between Israel and Iran was one of the conflicts put on hold in Syria. As Iran gained ground in Syria, Israel, still perceiving Iran as an existential threat, sought to build global and regional alliances in response.  Previously, Israel had only “bordered” Iran through Hezbollah, now it also had to face a powerful Iranian presence on the ground in neighboring Syria. The most critical development at this point was the election of Donald Trump as the president of the U.S. and the subsequent start of a new and special period in U.S.-Israel relations. Both nations decided that limiting Iranian influence in the region was a priority for themselves, even though they are yet to develop a concrete strategy on the issue. An attempt to reach a regional understanding against Iran was made with the active participation of the U.S., Gulf countries, led by Saudi Arabia and the United Arab Emirates (UAE), chose to become a part of this understanding.

However, it is difficult to argue that this understanding has caused any real change in the situation in Syria. Differences in national priorities, the lack of a concrete strategy and ideological narrow-mindedness have brought a new dimension and form in the aim of limiting Iranian influence. While the U.S. sought to limit Iranian influence in Syria through cooperating with the PKK, this strategy became even more meaningless with the start of the Operation Olive Branch. Gulf countries completely lost their focus on Syria. With the failure to turn this understanding into a concrete will, Israel began to work on achieving its above mentioned priorities within its own capacity.

The Red Line is the Israeli-Syrian Border

Israel did not change its low-profile yet active course on Syria even after the downing of an Israeli F-16 by the Syrian regime, which was an exceptional case in the history of the conflict. In other words, even though an escalation of tensions between Israel and Iran was expected following the downing of the F-16, both Israel and Iran (along with the Assad regime) prevented such an escalation from occurring. Israel prefers to continue its approach of limiting the military capacity of Hezbollah and keeping pro-Iran groups distant from its border via airstrikes over an escalation of tensions. At this moment it assumes that the Assad regime will continue to not respond seriously to Israeli airstrikes. With these considerations it reserves its right of intervention.

At the same time, Israel is preparing in the background to consolidate its de facto buffer zone if needed. It is known that Tel Aviv, considering the presence of the regime and Iranian-backed militia along its border a red line, is now in an effort to deepen its relations with some rebel groups. It should also be noted that this red line is also being respected by both the regime and Iran. The protection and fortification of a de facto buffer zone similar to the one built by Jordan in Daraa will continue to be one of Israel’s strategic priorities in Syria.

In the future, we will see Israel continue its precision airstrikes in Syria and increase its focus on the Israel-Syria border and the border crossings between Syria and Lebanon. Israel will continue its attempts to limit the Iranian presence in Syria within its own capacity and keep waiting for the U.S. to implement a more extensive strategy to fight Iranian influence, since the limited interventions of Israel in Syria will not be enough to effectively limit the rising Iranian influence.