The possibility that Tehran might give up hope of a political resolution due to reasons such as the crippling economy due to sanctions, increasing pressure from regional rivals and internal opposition provoking street protests, may cause U.S.-Iran tensions to rise to their highest level of the last 40 years, and this situation would have severe consequences for the entire region, including Turkey. 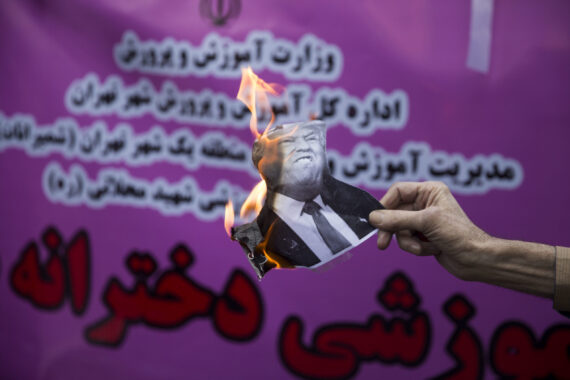 On the eve of renewed sanctions by Washington, Iranian protesters trample on an Israeli flag during a demonstation outside the former US embassy in the Iranian capital Tehran on November 4, 2018, marking the anniversary of its storming by student protesters that triggered a hostage crisis in 1979. Getty Images

The Trump administration’s unilateral withdrawal from the nuclear deal signed between Iran and the P5+ countries last May, as well as its simultaneous announcement that it will be re-imposing sanctions in two stages in August and November, has carried tensions stemming from Tehran’s nuclear activities back to the top of the international agenda. While there are some technical details regarding the nuclear deal among Trump’s objections, “normalization requirements” announced later by Secretary of State Mike Pompeo show that the U.S. actually intends to achieve a new and extensive deal regarding all of Iran’s regional policies.

Trump is a “deal breaker.” The Trump administration has withdrawn from old agreements not only with countries traditionally regarded as rivals, such as China and Russia, but also with countries such as Germany and Canada, long-time close allies of the U.S.

The fact that on the global stage the Trump administration has withdrawn from old agreements and abolished old practices not only with countries traditionally regarded as rivals, such as China and Russia, but also with countries such as Germany and Canada, which the U.S. previously had maintained very close political relations with, illustrates the fact that Trump’s “deal breaker” attitude and tendencies to make attempts towards “changing the rules of the game” are not exclusive to the Iran nuclear deal. Moreover, according to many observers, these “rules of the new era” are not simply due to Trump. The state apparatus in the U.S. as a whole wants to shape the grounds on which a global system that will last until the second half of the 21st century will be built before it is too late.

Trump Administration’s actions and their consequences

An important portion of the sanctions Trump described as “toughest ever” were imposed in August and concern topics such as oil trade, insurance processes, and the use of sea ports. The more severe sanctions had been left to November to give any third-party countries with important trade relations with Iran time to adapt. The fact that the sanctions will be imposed on the 40th anniversary of the beginning of the Iran Hostage Crisis, where supporters of the Iranian Revolution took over the U.S. Embassy in Tehran, reminds us of the saying “actions have their consequences.”

With the warning that sanctions will take place in November, countries such as South Korea, Japan, and France stopped importing oil from Iran by September and even countries opposed to single-sided sanctions on principle, such as India and Turkey, have significantly reduced the volume of their trade with Iran. As the severe sanctions take effect it is seen as a certainty that Iran’s oil exports will fall from their level of 2.5 million barrels per day in May to below 1 million barrels. Due to this reason, the Iranian Rial has lost 65% of its value versus the dollar in a few months with labor strikes and other forms of protest already becoming commonplace in the country.

As the severe sanctions take effect, Iran’s oil exports will fall from their level of 2.5 million barrels per day in May to below 1 million barrels. Considering that the Iranian Rial has already lost 65% of its value versus the dollar in a few months, a serious economic breakdown is not unlikely.

Iran does not have many options to resist against the policy of severe economic sanctions the Trump administration has inherited from the Obama administration and continued in a harsher manner. Even though many countries support Iran politically on this matter, with some EU members even trying to build alternative payment methods to bypass threats of sanction violation penalties from the U.S., it will not be easy for any such action and measure to help Iran access the global financial system.

Especially considering U.S. National Security Advisor John Bolton’s announcement that if the sanctions of November do not have the expected effect unspecified measures may be employed, means that the Trump administration wants to resolve the Iranian matter as quickly as possible. Thus, Iran – as the Iranian Minister of Foreign Affairs Zarif has expressed – keeps employing backdoor diplomacy channels in the hope of reaching to a point of agreement with the U.S., despite its persistent tough public stance. On the other hand, the Rouhani government has been implementing monetary transparency laws and measures such as FATF despite the internal opposition to render the excuses of the U.S. ineffective.

Moreover, the heavy economic sanctions aiming to reduce Iranian oil exports to zero are not the only tool that can put pressure on Iran. On September 22, an Iranian military parade held in the city of Ahvaz, which has an Arab majority and is rich in petrol reserves, was attacked and two different organizations claimed responsibility for the attack. Prior to this event, there were heavy clashes along the Iraqi border between separatist Kurdish organizations and Iranian security forces.

The fact that influential people close to the Trump administration are often actively participating in meetings of organizations such as the People’s Mujahedin of Iran shows that the siege on Iran may continue via different manners. Similarly, we must take note of the proliferation of organizations opposed to the Iranian regime founded abroad as well as international news stations being broadcast in Persian and aimed at the Iranian public, along with the efforts to make Reza Pahlavi, the eldest son of the last Shah of Iran, a more prominent public figure.

It can be seen that the U.S., while officially telling Iran that it has no plans of regime change, intends to signal that it has a limit to its patience and in case that Tehran does not comply with an important portion of the demands put forward then regime change will not be off the table. Hassan Rouhani pointed out this fact in a speech held on October 13, the beginning of the academic year, at Tehran University, and stated that the ultimate goal of the U.S. in Iran is regime change and it will not succeed in this goal.

It will not be wrong to claim that in terms of regional policies some of the U.S.’ regional allies have found courage due to the Trump administration’s policies. Especially Saudi Arabia and Israel seem to want to resolve the Iranian threat for good during Trump’s tenure. It also seems possible that Trump, just like with the NAFTA deal that he previously called “very bad” and then renewed, might be open to sign a new agreement that does not entirely exclude Iran from the regional equation with the intention to use it during the U.S. elections. So, not disregarding the possibility that the KSA-Israel-UAE triangle may cause provocations with the hopes of escalating military tensions between Iran and the U.S., the Tehran administration refrains from making any moves that may cause unrest in the region in practice despite its high-pitched threats.

This is why despite Tehran’s threats after the Ahvaz attack, it did not take any action against Saudi Arabia or the UAE, and in contrast to its response to the evacuation of Aleppo in 2016, it did not object to the agreement between Turkey and Russia regarding Idlib and stated that it will respect the agreement despite not being part of it. Similarly, in its meetings with European countries, Iran signals that it is ready to stop the conflict in Yemen and use its influence on Houthis in case a mechanism that will ease the pressure of sanctions and allow the continuation of international trade is put into place.

Again, Iran’s support for the creation of the Iraqi government with names that are more in line with the U.S. and the West rather than names under its control such as Maliki and Amiri is another important point. All these moves indicate that Iran intends to ease regional tensions in the short term and focus on the ongoing economic crisis in the country.

Iran’s intentions to ease regional tensions and get along with its neighbors will reflect positively on Ankara-Tehran relations despite being due to external pressure.

Iran’s intentions to ease regional tensions and get along with its neighbors will reflect positively on Ankara-Tehran relations despite being due to external pressure. Especially the reduction of disputes regarding Iraq and Syria, as well as a potential economic role Ankara might play in a time when economic sanctions weigh heavy on Tehran, along with the rising price of maintaining a relationship of cooperation with Saudi Arabia, which has proved itself as an unpredictable actor first due to its blockade on Qatar and later an even bigger scandal despite Turkey’s patient show of good will, will lead to a relative improvement in Turkey-Iran relations even though relations have historically been constrained to a narrow trend with little change.

Possible consequences of the sanctions imposed are not all positive scenarios for regional politics. If private talks between the U.S. and Iran do not yield any results and the hopes of a political resolution are ditched and/or European countries, in the announcement they are expected to make in the following days regarding the new financial mechanism, fail to satisfy Tehran’s expectations, tension in the region can continue to rise. In this case, as discussed above, the countries that constitute the regional leg of Trump’s strategy regarding Tehran can make unexpected moves to provoke Iran.

The possibility that Tehran might give up hope of a political resolution for reasons such as the crippling economy due to sanctions, increasing pressure from regional rivals and internal opposition provoking street protests, may cause U.S.-Iran tensions to rise to their highest level of the last 40 years.

Tensions with Iran can be directly caused by the U.S. intervention. For example, the military operation the U.S. is expected to conduct against Al-Hashd Al-Sha’abi (Popular Mobilization Units – PMU) in Iraq, which was postponed due to Iraq being in the process of forming a government can begin. Israel, which claims that Iran has begun to move missiles to Iraq like Syria, can conduct direct operations against Tehran’s proxies in Iraq like it does in Syria. This situation can result in a severe and bloody period in Iraq similar to that of 2005-2007. In this case, Iran and its allies can take concrete action against U.S. troops stationed on the east of Euphrates, which is an issue Iran has been extremely vocal about.

The possibility that Tehran might give up hope of a political resolution for reasons such as the crippling economy due to sanctions, increasing pressure from regional rivals and internal opposition provoking street protests, may cause U.S.-Iran tensions to rise to their highest level of the last 40 years, and this situation would have severe consequences for the entire region, including Turkey.