The ability of opposition parties to form an alliance and to gather together is related to the fact that the new presidential system is well established, even though this fact is yet to be noticed. 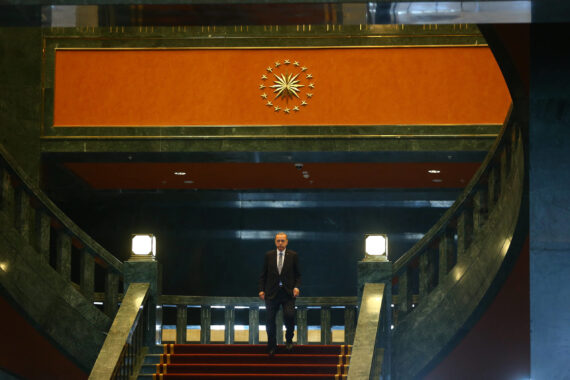 President Erdogan during an event at the presidential palace, Ankara. Anadolu Agency

It has been exactly one year since Turkey officially switched to its current presidential system. This is a system that is on the one hand, oriented by global principles and on the other, by Turkey’s own dynamics based on previous and certain political experiences.

Given the current conditions, Turkey’s president is also a member of a political party (currently Erdogan is a member of the AK Party). This was prohibited between 1961-2017. Thus, with the new system, a new kind of politics occurred. In addition, there are current circumstances where the parliamentary majority consists of the AK Party-MHP alliance, and where some metropolitans are led by CHP mayors. This has led to arguments casting doubt on the performance of the new presidential system.

In the last 40 years, many efforts were made in order to reform Turkey’s system of government, which finally became reality in 2017-2018.

Firstly, one has to stress that the Turkish presidential system and the general historical search to solve Turkey’s chronic problem with its political system cannot be limited to the AK Party era or in particular to President Erdogan himself. Certain politicians in the past have gradually tried to circumvent significant problems of Turkey’s previous and lacking parliamentary system by making the offer to switch to either a semi-presidential system or to a system like the one in the U.S. In this sense, in the last 40 years, many efforts were made in order to reform Turkey’s system of government, which finally became reality in 2017-2018.

As I generally addressed in this column, I tend to not believe that Turkey’s opposition circles are really aiming to shift back to a parliamentary system. By this, I don’t mean the political elite, in particular around the CHP, but the secular-oriented Kemalist Turkish voters. During the presidential election in 2018 for instance, the CHP’s candidate, Muharrem Ince, interestingly stated that he does not aim to immediately switch back to the parliamentary system as soon as he is elected. According to Ince’s words, he wanted to work for approximately 2 years under the presidential system and then consider a shift back to the parliamentary system.

Interestingly, even the CHP chair Kemal Kilicdaroglu said that they had never requested to shift back to the old parliamentary system.

But to be honest, with regard to Turkey’s very dynamic political agenda, two years is not an actual persuasive time projection. These words had been interpreted by some voices that even the CHP was considering to accept the presidential system in the long-run. Maybe not in the exact words of Ince, but during his visit to Istanbul’s new mayor Ekrem Imamoglu, CHP chair Kemal Kilicdaroglu said that they [the CHP] had never requested to shift back to the old parliamentary system. This reveals –or most likely will clearly show in the near future- that Turkey’s current presidential system will be established in the future.

Maybe it does not seem that clear at the moment, but the opposition’s categorical rejection of the presidential system –as has been the case in previous years- most likely shifted to a rather cautious tone. This becomes obvious in the criticism by the CHP’s chairperson regarding the previous parliamentary system. By this, one should also take into account a fundamental development. Namely, the AK Party recently lost mayoral elections in Turkey’s main cities, Ankara and Istanbul. This has been interpreted as a result of the “blocs-oriented politics,” which is a result of Turkey’s new presidential system.

To re-emphasize; the main idea of the new system of government is based on transparent policy-making, which additionally requires pre-electoral alliances in order to achieve the needed majority of 50 percent +1 vote prerequisite. Thus, the need to establish alliances also make it possible for the opposition to gather an alliance against the ruling government.

The debate over Turkey’s system of government have come to an end with the presidential system. But minor changes are possible.

As a consequence, in my opinion, discussions about Turkey’s system of government have come to an end despite several wishful thinking ambitions. I guess that in the long-run some minor changes may be made to reduce new regulations or shortcomings in the implementation of Turkey’s presidential system. However, a potential call or goal to re-shift to a pure parliamentary system does not seem very convincing. As I have already pointed out, the ability of opposition parties to form an alliance and to gather together is related to the fact that the new presidential system is well established, even though this fact is yet to be noticed.

In this context, it might be useful to look at the historical implementation and societal acceptance process of France’s new system of government after 1958/62 by center-right parties. Until that time, French leftists initially opposed the new semi-presidential system. However, in the following years it became clear that even French socialists, who of course differentiate themselves from Turkish leftists or particularly CHP members, got used to the new system and decreased their categorical rejection to the new system.