What Changed 25 Years After the Solingen Arson Attack

During the last week the entire country remembered this terrorist attack, while on the other hand members and sympathizers of the right-wing AfD party tried to relativize the Solingen attack by focusing on the speech of 75-year-old Mevlude Genc, who lost her two daughters, two granddaughters and a niece in the blaze. One of these AfD politicians attacked Mrs. Genc on social media by criticizing her due to the lack of her German language skills and her headscarf. 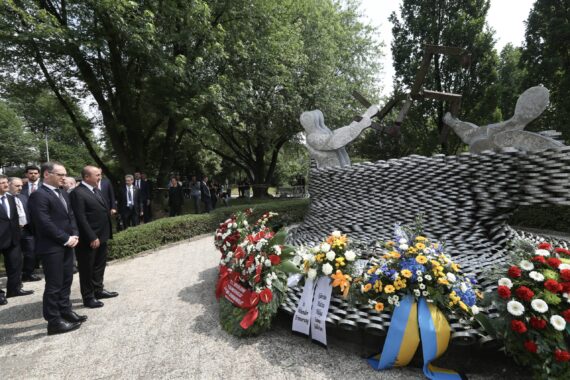 Minister of Foreign Affairs of Turkey, Mevlut Cavusoglu (2nd L) and his German counterpart Heiko Maas (L) visit the memorial in front of the Mildred-Scheel-Berufskolleg to commemorate victims of arson attack in Solingen, Germany on May 29, 2018. Anadolu Agency

25 years ago, on May 29, 1993, a racist arson attack in the western German city of Solingen killed five Turkish women and girls. As the deadliest racist attack subsequent to the German unification in 1990, this crime has been commemorated during its 25th anniversary last week. Many policymakers, above all German Chancellor Angela Merkel, President Frank-Walter Steinmeier, German Foreign Minister Heiko Maas, Justice Minister Katarina Barley and Turkish Foreign Minister Mevlut Cavusoglu, who came to Germany in order to join the commemoration, appealed to Germany’s people to remember the young republics deadliest racist attacks.

In this context, for instance, Chancellor Merkel stressed that even today people in Germany “are being demonized and attacked because they are asylum-seekers or refugees, or because they look like them because of their skin color and it doesn’t matter how long they have lived here.” Indirectly, Mrs. Merkel admits that there is little change in Germany’s far-right and extremism problem. This is also observable in the rise of racist and anti-democratic voices among several circles. Furthermore, the rise of far-right and populist parties in Germany symbolizes the institutionalization of far-right biases and political mobilization among citizens.

During last week, many German media outlets and politicians commented on the Solingen attack by emphasizing the fact that today Turks belong to this country or pointing out similar statements. While underpinning the need for fighting racism, many members of the federal government showed their solidarity with the Turkish community in Germany. However, the question arises as to whether there is any actual change in the general societal mood with respect to Turks or even Muslims in Germany. Of course, in contrast to the societal and political mood, which has been affected and even shaped by Neo-Nazi propaganda and racist attacks during the early 1990s, the voice of many people without racist sentiments has rose since then, too.

Today it became quite obvious that politicians remember these kinds of days and show their compassion. In 1993, mainstream politicians like the former Christian Democrat Chancellor Kohl or other politicians from his party even ignored to take part at the funeral ceremony most likely in order not to scare the own nationalist and even, unfortunately, racist base. In addition, even though there is actually no connection, it has to be mentioned that the coalition government consisting of the CDU/CSU and FDP in 1993 initiated a massive restriction of the right to be granted asylum. Thus, it’s argued that this step has been seen as a motivation factor for racist attackers.

In today’s Germany, mainstream politicians’ general positions and maybe statements have partly changed and above all there is at least a seriousness with respect to the racism problem. Nevertheless, a well-known deficit occurred while institutional racism increased as well. Racists and extreme right voters started to prefer an actual racist party, the Alternative for Germany (AfD), which, according to recent polls, receives 15 percent of the votes.

As one guesses, during the last week the entire country remembered this terrorist attack, while on the other hand members and sympathizers of the right-wing AfD party tried to relativize the Solingen attack by focusing on the speech of 75-year-old Mevlude Genc, who lost her two daughters, two granddaughters and a niece in the blaze. One of these AfD politicians attacked Mrs. Genc on social media by criticizing her due to the lack of her German language skills and her headscarf.

Just imagine. An AfD politician is able to verbally attack a woman who lost her two daughters and two granddaughters and niece. A woman who did not turn her back on Germany and during the recent memorial ceremony preferred statements like “The death of my family should open us up to be friends … let’s live together hand in hand…. I was condemned to live a life in darkness after the killings … I am praying that nobody else will have to suffer this pain.” This woman only deserves to be praised by all people living in Germany, as Mrs. Merkel recently did.

By discrediting her, the AfD politician also criticized the minister-president of North Rhine-Westphalia who had declared Mrs. Genc as the envoy of integration (Botschafterin der Integration). Unfortunately, similar insulting statements continued on social media.

Thus, despite improvements in the last 25 years in the fight against racism, it is no secret that xenophobic, anti-Islamic sentiments and the hatred against Turks has risen in Germany. This phenomenon is still one of Germany’s most urgent societal problems. As Herbert Prantl stresses, the AfD uses same discourses, which has been preferred from those parties who are nowadays themselves facing the AfD as a problem. Those, who have made use of anti-migration discourses paved the way for today’s AfD. But if one aims to fight and diminish racism, one may start to make sincerely self-criticism – not just by some symbolic and famous political names, but the entire societal components have to be taken into account. There are no other alternatives due to the fact that people –Germans– with migrant origins, who do not face any legal barriers, will definitely not leave Germany. One has to accept this and find solutions to diminish racism, there is no other choice.