What Does Erdogan’s Leadership Mean for Turkish Politics?

Turkey will reach the moment of political normalcy and Erdogan will then retreat to a less prominent position. Under current conditions those criticisms of one-man rule towards Erdogan represent nothing but an utter ignorance of politics. 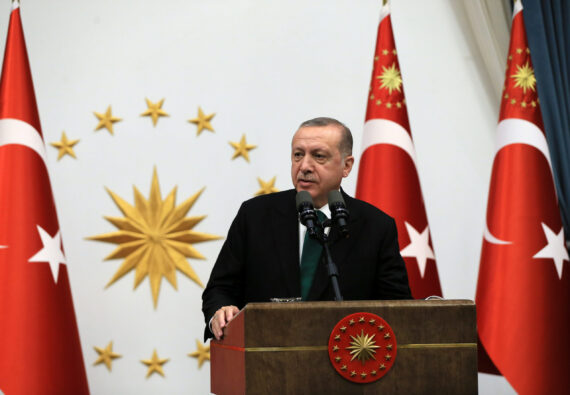 urkish President Recep Tayyip Erdogan makes a speech as he gathers with relatives of martyrs and veterans during an iftar (fast-breaking) dinner at the Presidential Complex on May 16, 2018 in Ankara, Turkey. Anadolu Agency

Many analysts take the rise of a particular person to political primacy as a sign of one-man rule or authoritarianism. The basic reason behind this crooked perception is that political life is taken as it happens to be merely in one single mode. This mode can be defined in terms of the situation within which the basis of socio-political order or the established laws and institutions are to an extent consented by all the participants.

The conditions that determine Turkish political life resembles the latter case. There are three characteristics of this special condition of Turkish politics. The first is the presence of formlessness. The post-1980 period testified the dissolution of Kemalist hegemony under the pressure of domestic opposition groups such as the conservatives, liberals and the Kurds. Combined with the globalization process, the statist Kemalist order in Turkey was deeply shaken. These internal and international challenges intensified the existing discrepancy between the societal demands and established political order and paved the way for a political vacuum and formlessness in the country that begged to be filled.

The second characteristic is the presence of a large consensus within society that the country needs a new political order. The support for democratization in almost all sections of society has demonstrated those political expectations. The demand for democratization has simply been signifying the desire for an alternative political order. This has been accompanied later by a high demand for political being in the face of formlessness and dual domination of bureaucratic oligarchy and foreign forces. This was manifested by the victory of the “yes” campaign in the referendum on constitutional change for the presidential system on April 16, 2017, and the failure of the June 15, 2016 military coup attempt, resisted by the people.

The last condition is the longtime absence of political leadership for realizing those political objectives. Turkish society has been in search for popular leadership with military and political virtù since the 1950s. Adnan Menderes (and his DP) and Turgut Ozal (and his ANAP) were candidates for that role of a liberator. However, both political figures or movements were successfully contained and ended by the then hegemonic state bureaucracy. They failed to get the oligarchic structures to roll back and replace them with a new form of political order.

The rise of President Erdogan to political primacy and the gradual establishment of a new political form have been a response to this pre-political situation in Turkey. Erdogan has risen to a leadership position in that political vacuum and has become the leader that has laid the foundations of a new political order in the country. He has led the process of political revolution, which is characterized with the replacement of an oligarchic political regime with popular democracy. The switch to a presidential system in a period of time from 2007 to today represents this process of democratization.

The next step in front of Erdogan is to transfer political power to the people by producing conditions that the country is ruled though laws. This may happen in two steps. The first step is the completion of the transition to a presidential system with the 24 June elections, which promises to put the popular will at the center of politics. The second step is the construction of a new constitution, which should be based on society values and play a role of balancer against the political forces such as the bureaucracy and big business. With all these done, Turkey will reach the moment of political normalcy and Erdogan will then retreat to a less prominent position. Under current conditions those criticisms of one-man rule towards Erdogan represent nothing but an utter ignorance of politics.