What Does HUDA-PAR’s Support for the AK Party Mean?

Huda-Par has signaled to the conservative Kurdish voters that Erdogan is still the closest candidate to them. How this message will be received will determine the winner of Turkey’s Kurdish votes, and perhaps even the winner of the presidential elections on June 24. 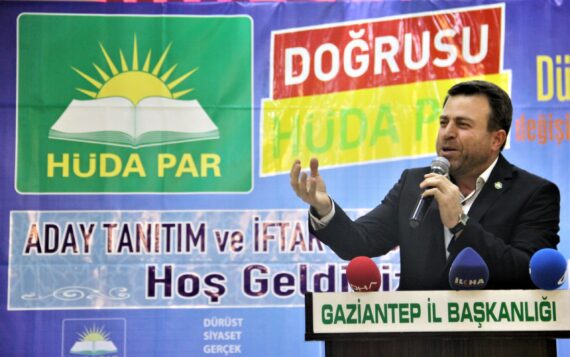 While the elections are coming closer, the political agenda is getting busier in Turkey. Amongst many developments in this regard over the past week, one is particularly interesting with regard to the electoral competition between the AK Party and HDP – the two major parties that share the votes of Turkey’s Kurdish constituency.

Huda-Par, a minor ethnic Kurdish party, had already declared that it would not be a part of the AK Party-led electoral coalition (which means that it will run for the parliamentary elections separately from the AK Party-MHP-BBP bloc also known as Cumhur Ittifaki). Nevertheless, this week Huda-Par announced that it will support AK Party leader Erdogan in the presidential elections, which will be held on the same day as parliamentary elections. While the color of the Kurdish votes in Turkey is the key to the electoral outcome, this recent move by Huda-Par deserves a closer look.

The Free Cause Party (Huda- Par or Hür Dava Partisi) is one of the many ethnic Kurdish parties in Turkey. The party was found in 2012 and has been active in the Turkish political landscape since then. In fact, the party has a troubled past given the allegations about its connection to the Kurdish Hizbullah, a terrorist organization which was responsible from multiple kidnapping and murder cases during the 1990s. Some see the party as a continuation of Kurdish Hizbullah, some see Hizbullah and Huda-Par totally unrelated, and some see Huda-Par as an output of an evolution from a radical violent organization to a peaceful political party. While there is no consensus on the relationship between the two organizations, the prevailing idea is that the two are not totally unconnected. Nevertheless, it is also a common understanding that the party as of today shows no intention to initiate or support a violent campaign and, hence, it is a legitimate member of Turkey’s league of political parties.

Huda-Par has so far failed to catch the voters’ attention as the Kurdish constituency of Turkey tend to split their votes between the incumbent AK Party and the secular ethic party HDP. On average, the AK Party receives the votes of conservative Kurds while the HDP attracts secular and ethnic nationalist Kurds. Huda-Par is ideologically somewhere between the AK Party and the HDP. It has both ethnic nationalist and conservative tendencies. To some, the party is beyond mere conservatism and can be called Islamist for its emphasis over the Islamic ummah, the Palestine cause, and the call for a system that will enable the Islamic way of life.

The distinction between Huda-Par’s Islamism and the AK Party’s conservativism might require further explanation. While both parties cherish Islamic values, the AK Party does so in a more conservative way. For the AK Party, Turkey should conserve its national culture and must not lose its connection with the country’s centuries long history going back to the Ottoman era. Islam has a central place in Turkey’s national culture and this culture must be protected according to the AK Party. But it is more like a conservative interpretation of Islam, or as some call it, the Turkish-Islam synthesis, which is quite peaceful with the secular character of the state and has nothing to do with the salafi interpretation of Islam.

Huda-Par seems to be more troubled with both the Turkish-Islam synthesis and many secular laws and regulations of the country. Hence, while the two parties ideologically differ, as one is merely conservative and the other more inclining toward Islamism, they share the emphasis over the role of Islam in society and both parties propagate conservative social policies. Among such policies one can count promoting the role of religion in the education of children, holding an anti-abortion stance, and policies aiming to minimize drug and alcohol consumption.

What does it mean for the AK Party to receive the support of Huda-Par in the presidential elections? At the end of the day, Huda-Par is just a minor party that cannot compete with the AK Party or the HDP for the Kurdish constituency. Nevertheless, Huda-Par’s decision to support Erdogan signals to the Kurdish constituency that this election is not between Turks and Kurds but between those that cherish Islam and those who do not.

Huda-Par’s call will not only mobilize its own voters to vote for Erdogan, but it also sends a signal to the broader Kurdish masses. In other words, Huda-Par has signaled to the conservative Kurdish voters that Erdogan is still the closest candidate to them. How this message will be received will determine the winner of Turkey’s Kurdish votes, and perhaps even the winner of the presidential elections on June 24.