Macron represents himself as the voice of the liberals against authoritarian nationalists for the 2019 European Parliament elections. However, the liberal and central balances of France might confront a complete dissolution unless the economic, institutional, and social causes of the rise of populism are seriously addressed. 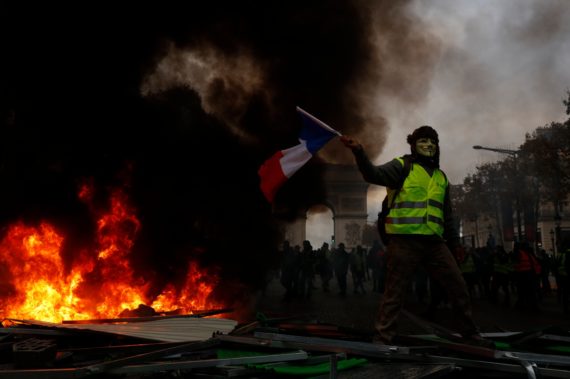 Yellow vests (Gilets jaunes) protestors shout slogans as material burns during a protest against rising oil prices and living costs near the Arc of Triomphe on the Champs Elysees in Paris, on November 24, 2018. Getty Images

In France, although the rise of the far right, Islamophobia, anti-refugee rhetoric and populism do not seem to directly contradict the notions of people’s right to vote and national sovereignty at first glance, it definitely challenges the liberal democratic system that came into prominence in the aftermath of World War II. Therefore, in the context of the crisis of democracy confronted in France, we can mention a dual situation that encompasses the problems in the operation of the democratic regime and the collapse of the liberal order. In this context, the operation of the democratic regime refers to the social governance mechanisms such as public-representation relations, system of parties, voter turnout and people’s belief in the political system whereas the liberal order refers to the central political balances such as French national identity, multiculturalism, liberty, social state and liberal-capitalist values. In consideration of these aspects, this article aims to scrutinize the movements that fight against the French democratic regime and liberal order and discuss the underlying reasons for the rise of populism in France.

Problems in the operation of the democratic regime

In today’s France, not only liberal values but the entire democratic regime and representation system are suffering a profound crisis. Viewing the surveys reflecting people’s lack of trust in politicians, the conventional political system and the substantial decline in voter turnout over the past 20 years, we can observe that the French democratic structure has been subjected to severe criticisms. People’s distrust in the representation system is disembodying the notion of national sovereignty, one of the milestones of democracy, in the long term. Based on the will of the people, just as other democracies, the French democracy is destructing itself when it cannot enable people’s determining role in governance through the representation mechanism. The distrust of French people in the system is not an ineffective phenomenon, but rather causes a set of radical changes in the French political order.

The best example portraying this situation is the political strife and polarization in France. Some developments, such as the convergence of long-established center right Republicans and far-right National Rally, the complete dissolution of the center left Socialist Party, and the rise of the vote share of the far left La France Insoumise (Unsubmissive France) to around 20 percent are all symptoms of this strife. The only conventional liberal party currently active in the French political arena is Emmanuel Macron’s La République En Marche! (The Republic on the move!), whose members mostly comprise former members of the Socialist Party and the Republicans. In a nutshell, since the French democratic system could not incorporate people’s will in its governance, it has been facing a radical transformation with the disturbance of the old former liberal balances.

Although the rise of the far-right in France began around 35 years ago with the Front National, it has influenced the discourses of other parties and dominated the present popular discourses with regard to identity, immigration, security, and Islam.

Liberalism is one of the most crucial characteristics of the new democratic balance that emerged in the aftermath of World War II in French history. Aiming to merge capitalism and the social state by protecting individual rights and social identity, the first traces of the liberal order were seen in the program of the National Council of Resistance (CNR) that was jointly designed by Charles de Gaulle supporters and Communist partisans in 1944. As of the post-war period, through economic growth and social movements, the French decision makers from both the right and left endeavored to defend individual freedoms alongside strengthening the independence and welfare system in France. Referred as the French liberal balance, this period prevailed between 1945 and 1975 immediately after the decline of fascism.

Nevertheless, when the French economy encountered its first stagnation, the racist and nationalist political movements repressed until then managed to resurface. The racist Front National, which gained 11% of the French vote in the 1984 European Parliament Elections, started to steer the agenda in French politics with its anti-immigrant and anti-Islam discourse. Although the rise of the far-right in France began around 35 years ago with the Front National, it has influenced the discourses of other parties and dominated the present popular discourses with regard to identity, immigration, security and Islam. As a result, the mainstream liberal parties started implementing hardline policies at least in matters relating to security. Just as many anti-Islam and anti-immigrant decisions (headscarf ban laws, establishment of Immigration and National Identity Ministry, harsh measures in security policies etc.) were issued during the Chirac and Sarkozy governments between 2002 and 2012, a series of decisions that restrict individual freedoms have been issued in recent years on the pretext of fighting against Islamization and terrorism (state of emergency and security law, uncompromising refugee policies etc.).

In view of this framework, it can be better understood why the total vote share of the racist and Islamophobic candidates in the first round of the latest presidential elections was around 46 percent (total vote for Front National, the Republicans and Debout la France). Although Macron saved the old liberal balance, the growth of the far-right and far-left parties cannot be stopped. So, it is not hard to foresee that a new illiberal balance might appear if the public anger against the liberal party continues to grow.

The poor, immigrants, and white middle class in France, which has similar sociological dynamics with the Trump electorate in the U.S., feels alienated from both the state and the state elite.

Economic approach: It can be contended that the long-standing austerity policies and worsening economic conditions of the “white middle class” are among the primary causes of the growth of populist and racist movements and people’s distrust and anger for the French political system. In this scope, the most vulnerable class affected by the restriction of French social state assistance is neither the upper class that enjoys a large economic income nor the lower classes that have the opportunity to apply for subsistence aids granted by the state. The white middle class in France, which has similar sociological dynamics with the Trump electorate in the U.S., feels alienated from both the immigrants and the state elite. The vast majority of “Yellow Vest” protesters in Paris, who have been protesting against the high cost of living and fuel prices, belong to the white middle class.

In this respect, it would be useful to remember economist Branko Milanovic’s “elephant chart” that shows the evolution of different income classes across the world. In the chart, the elephant’s torso stands for the sharp increase in the incomes of the poorest segments, who constitute half of humanity and mostly live in developing countries, while the trunk represents the upper classes of developed countries, which corresponds to 1% of the world population. The face of the elephant indicates that the income levels of middle classes in industrialized countries have been making no progress. Although it cannot be said that middle classes live under poor conditions, their quality of life is gradually declining.

All in all, as a result of the economic stagnation in France, the French middle class supporting the old liberal balance has stoked an authoritarian, populist and racist “white man’s revenge” just like the case in the U.S.

Institutional approach: Another reason for the current crisis in French liberal democracy is the delegation of a part of the French state’s sovereignty to EU institutions. When European nation states vested the EU with considerable authorities such as monetary policies, the situation began to challenge national democratic structures built on the basis of the nation’s sovereignty principle. Due to the delegation of authorities, European nations lost their controlling power on the state level and could not retrieve those rights from the political institutions of the EU. The growth of Euroscepticism in European societies stems from the impression that the EU institutions are controlled by lobbies and a privileged group who did not come to power through democratic means. Regardless of the accuracy of this view, most French people today define the Brussels-originated rules and neoliberal policies as pressure. Meanwhile, a part of the French electorate, including those with both right and left allegiances, are in search of a “savior” that can revive the national political will. In this sense, the present French liberal elite might face a decline and even be labelled as traitors.

As a result of the economic stagnation in France, the French middle class supporting the old liberal balance has stoked an authoritarian, populist and racist “white man’s revenge” just like the case in the U.S.

Social approach: Last but not least, the tension in the French liberal democratic order also stems from a long-term recession ongoing for centuries in the collectivity perception of the French society. According to French philosopher Marcel Gauchet, when the French liberal order improved, a crisis emerged in the democratic operation in a contradictory way. To put otherwise, the efforts to extend human rights and liberties by solely focusing on individuality have been detrimental to the collectivity potential of the French. For this reason, it can be argued that the French move away from religion, traditions and any kind of social ideology (such as communism and nationalism)  and focus on individual independence and freedom weakened their collective political influence and force. This dichotomy between the individual (liberal) and the collective (democratic) provides an insight into the increasing popularity of authoritarian identity politics among the French. On the other hand, such identity politics debates cause polarizations in the French public, leading people to nationalism, racism, religious extremism, communitarianism or nihilism.

Macron represents himself the voice of the liberals against authoritarian nationalists for the 2019 European Parliament elections. However, the liberal and central balances of France might confront a complete dissolution unless the economic, institutional, and social causes of the rise of populism are seriously addressed.